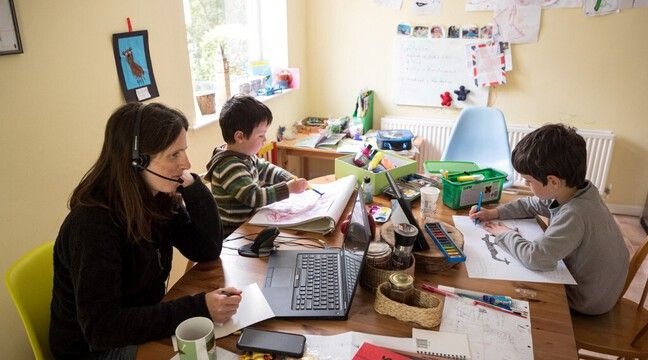 According to a study published this Friday by the Directorate in charge of research (Dares) at the Ministry of Labor, the health and economic crisis linked to the coronavirus epidemic has caused a “deterioration”, general or partial, of working conditions for just over 40% of workers. employees in France. And this degradation would be more important for salaried women than for men.

Why ? Because jobs with a high percentage of women have suffered the full brunt of the consequences of the health crisis: “longer hours and more intense work”, as well as a “reorganization due to overwork” for a third of the workers. surveyed cited by Dares. A third of those questioned, the overwhelming majority of whom work in so-called “more feminine” professions. Or, obviously, the medical and paramedical professions, made up of 70% women, according to the INSEE study A majority of women among the “key workers” of the first containment. But also the education sector, where there too, women are over-represented. They constitute 85% of primary teachers, and 59% for public colleges and high schools. The percentage is even higher in the private sector, according to the site’s figures
Emploipublic.fr.

“It is these professions that have been asked the most: treating the sick, not interrupting the teaching of children, allowing the population to do their shopping, etc. Cashiers, nurses and teachers were over-solicited during this crisis, ”says Bernard Vivier, director of the Higher Institute of Labor.

“A loss of meaning in his profession, categorized as non-essential”

And if in the sectors of agriculture, industry or construction, which mainly employ men, employees believe that the health crisis “had little impact”, other sectors have suffered as a result. partial unemployment and cessation of activity. Sectors in which jobs are predominantly occupied by women, such as commerce (73.5% of saleswomen in stores are women). “And there is then a loss of meaning in his profession, categorized as non-essential during this whole crisis”, analyzes Joseph Thouvenel, deputy national secretary of the French Confederation of Christian Workers (CFDC) and specialist in labor issues.

“The so-called“ more masculine ”professions continued their activity during the health crisis and in the same way. Often more manual, they requested an on-site presence as before the Covid-19 and that, without necessarily any more health risks, ”explains Bernard Vivier. For their part, caregivers, teachers or cashiers, more exposed to the coronavirus, have seen their working conditions evolve (teleworking, teleconsultation, work overload, longer days, etc.). As proof, caregivers are among the professions for which the risk of contracting the coronavirus has been the highest: 29% of nurses and midwives questioned claim to have contracted Covid-19, against 18% of employees, according to the study of the Dares.

It is also one of the lessons of the study, teleworking was far from being an idyll to live through and is mentioned by 40% of those questioned as one of the causes of the deterioration of their working conditions. There is a stronger deterioration in the health, physical and mental, of teleworkers compared to those who continued face-to-face. And here too, it was the women who suffered the most. “Teleworking is unequal. Women experience it less well because it exposes them to more tasks to fulfill: domestic and family. Being a face-to-face employee also allows you to take a breath of fresh air in the daily expenses of the house. Domestic responsibilities far too often neglected by men, alas, ”notes Joseph Thouvenel.

“Work and private life remain two interconnected worlds, we cannot divide them. Women have seen their living conditions more degraded than those of men during this health crisis. There was also more violence against them and a greater mental burden for them. It is therefore normal that they feel that their working conditions have also deteriorated, ”concludes Bernard Vivier. The study recalls that, during the health crisis, the number of depression doubled compared to 2019.