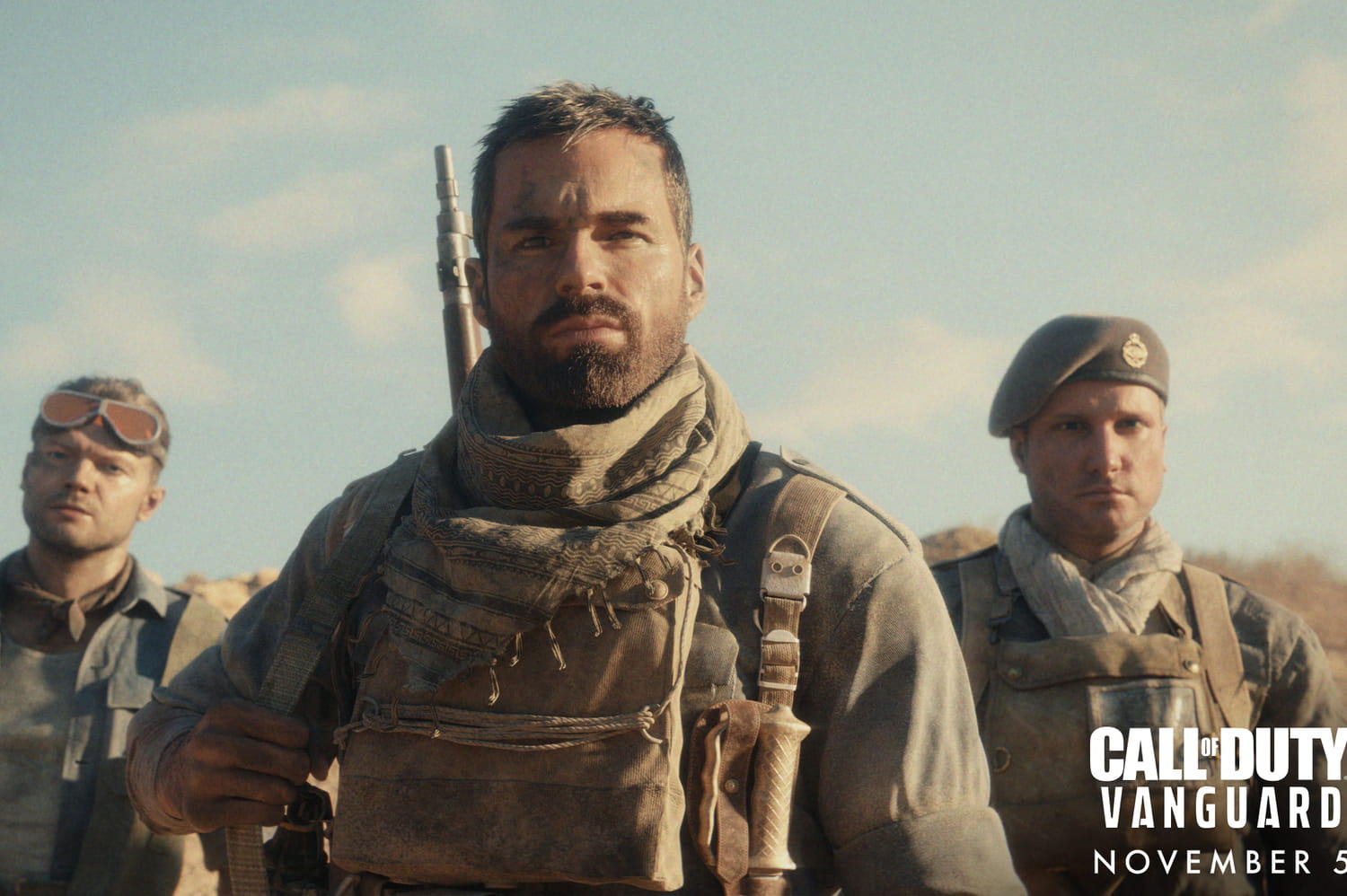 The Call of Duty: Vanguard beta is well underway, and is now open to all-platform players. We explain everything you need to know about this new title and its beta a little further down in this article.

[Mis à jour le 16 septembre 2021 à 16h36] While EA is struggling with its Battlefield 2042, which has seen its release date pushed back by a month, Activision is sticking to its schedule. The release of Call of Duty: Vanguard, the ambitious new installment of the most famous FPS franchise, is approaching and it shows. This new opus against a backdrop of World War II has already deployed its beta, which is gradually opening up to all platforms and all players. So does this Call of Duty really mark the real return to the sources of the license? Will it be the expected technological renewal? We’ll let you judge for yourself by detailing everything there is to know about it, including how to test it.

Now it’s the turn of the game beta to begin. A beta that will focus on the game’s multiplayer mode. It should weigh between 40 and 50 GB. To access it, nothing could be simpler, download it from the store of your platform, or access it through the Warzone menu, Modern Warfare or Black Ops Cold War. The dates of the beta phases:

Featured in the game’s Playstation alpha, Champion Hill mode returns during beta, this time playable in duo, trio and solo. As a reminder, in this new game mode, you take turns in small death matches against other teams. The team that has no more lives is eliminated and so on. A bit like a TFT, the combat phases are alternated with “shopping” moments where the surviving teams have the opportunity to improve their equipment. The beta will also include the traditional Team Deathmatch, Domination and Confirmed Elimination. Four maps will be available on the first weekend, and Eagle’s Nest will join the rotation on the second beta weekend.

Activision knows its recipe by heart and it shows. The multiplayer of Call of Duty Vanguard promises to be muscular, and will offer everyone an intense and explosive experience. The American studio boasts the novelties of this new opus which promises nearly 20 cards (a huge number we can say) at its release and a new weapon customization system. And yes, the Gunsmith is back in Vanguard this time offering up to 10 customizations per weapon (compared to 5 in Modern Warfare). We can also note the arrival of so-called “tactical” destruction which, far from being total, allows new angles to be created, a bit like a Rainbow 6. Killstreaks are making a comeback with traditional drones. and dogs, but also some new features such as the flamethrower or the Goliath, a sort of miniature RC-XD. Note, Call of Duty Vanguard will include an FOV setting on console. In any case, we can’t wait to test all of this in the beta.

We can also note the arrival of the “Patrol” mode, new born in the playlist of available game modes. Patrol is a dynamic, team-based game mode, and its premise is quite new. The two teams compete for a point that moves across the entire map. The team with the most players in the zone accumulates points. A game mode centered around objective capture, which will appeal to players a little less bloodbath focused. However, the experience is still very intense, and is a welcome addition to the existing modes.

Vanguard continues in the tradition of its predecessors. Although at the cutting edge of technology in terms of graphics, thanks to its graphics engine IW8 (improved from Modern Warfare), it shouldn’t require an extremely capable machine to play it. At least that’s what the minimum configuration suggests. Information to be put into perspective, especially during the highly anticipated 48-player Blitz modes and if we take into account the introduction of partial destruction of in-game environments.

Gamescom 2021 lives up to fans’ expectations and undoubtedly marks the start of a busy comeback for the video game world. During Gamescom Opening Night, there were plenty of games featured, and Call of Duty Vanguard was no exception. Actress Nadine Bailey (The Last of Us, Uncharted) presented this ten-minute sequence of PS5 gameplay from the Call of Duty Vanguard campaign. She will indeed play Polina Petrova, a Russian sniper inspired by Lioudmila Pavlichenko, forced to fight to defend her country from the German invader. Ten breathtaking minutes in the heart of the Battle of Stalingrad, one if not the bloodiest battle of WWII. Impressive graphics, nervous gameplay with a few new features (indiscriminate shooting and climbing) and a gripping realism that have only laid the foundations for a single player campaign that we are eagerly awaiting, the November 5 next.

It is therefore a homecoming for Call of Duty, which is again oriented towards World War II. Call of Duty: Vanguard will be at the height of this global conflict on multiple fronts. It will be developed by Sledgehammer Games (main game), Raven Software (Warzone integration) and Treyarch (Zombies mode). It will also include a single player campaign which will be based on the fate of several war heroes on the Pacific, Eastern and Western fronts, including Russian sniper Lioudmila Pavlichenko.

On the technical side, Vanguard will run on an improved version of the impressive IW8, the graphics engine that, among other things, provided Call of Duty Modern Warfare in 2019. We also know that it will include 20 cards multiplayer when it was released, an impressive number that will continue to grow with the various additions of content. It will include a mode Zombies, developed by Treyarch and which will be a prelude to the story of Black Ops: Cold War. Multiplayer will feature a variety of modes, with both low-player-based experiences and full-scale battles. Great novelty, this new component will include partially destructible and one new firing system cover. A weapon customization similar to Modern Warfare will also be available.

The release of Call of Duty: Vanguard will also be a big date for Warzone, which will be profoundly modified by the integration of the game. A new map (a real one this time), Vanguard, will replace Verdansk, and a system d’anti-cheat will be applied in the game. A relief for many players who were eagerly awaiting this announcement.

Side fans, these announcements were received with a mixed reception. The usual excitement surrounding the release of a Call of Duty seems to have given way to a certain form of weariness in front of this umpteenth annual release. In addition, some doubts remain about the integration of this new content in Warzone, and the impact of a cohabitation between Call of Duty Modern: Warfare, Call of Duty: Black Ops Cold War, and Call of Duty: Vanguard on historical veracity and immersion in play. It will therefore be up to Raven Software to solve this technical and chronological puzzle. On the other hand, it is impossible to deny that this exit could bring to Warzone a necessary breath of fresh air.

Regarding the space occupied on hard drives, the latest Call of Duty have stood out, it’s true, and not for their finesse. With a Modern Warfare that has been able to reach or even exceed 200 GB at times, there is cause for concern for Call of Duty Vanguard. Now, if renowned leaker Tom Henderson is to be believed, Call of Duty Vanguard could reach close to 270 Go. Unheard of in franchise history (for comparison, Battlefield 2042 is supposed to weigh in at around 50GB) and very bad news for console gamers and full hard drives. On the Microsoft Store, however, the game is displayed at 175 Go. Of course, this information remains to be confirmed. In both cases, you will need to arm yourself with a good connection and / or a lot of patience on the day of its release. It may also be necessary to make room!