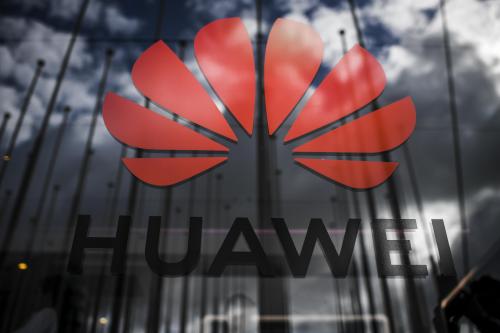 The first equipment production site, particularly related to 5G, of the Chinese telecoms giant Huawei outside China, should open “in the course of 2023” in Alsace, the project leaders announced on Tuesday January 26 in Strasbourg. .

Construction work on the plant, which will be dedicated to base stations, could begin as early as this year and the site “Could produce the first mobile station during 2023”, announced at the headquarters of the Grand Est Region Catherine Chen, vice-president and member of the Board of Directors of Huawei, without giving a precise date.

“Today is a historic date for Huawei” who “Formalizes the establishment of a production site” in Alsace. It will be about “The first mobile equipment production plant (Huawei) outside of China ‘, she added in a video message broadcast during the official presentation of the project, which brought together representatives of Huawei, the Grand Est Region and the Haguenau Agglomeration Community (CAH).

Huawei had announced, on December 17, its decision to set up its factory in the “Business Parc” of Brumath, in the Bas-Rhin, a town of about 10,000 inhabitants about twenty kilometers from Strasbourg, not far from Haguenau.

The Chinese group will invest 200 million euros in this site called “Huawei European Wireless Factory”, which is to produce the main equipment making up the wireless base stations (ie antennas) intended for the European market .

It will produce base station equipment for “All generations of technology, including 3G, 4G and 5G”, said Linda Han, vice president of public affairs of Huawei, in charge of France.

According to Huawei, the site should generate 300 direct jobs, 500 in the long term, and should produce the equivalent of one billion euros of equipment per year.

“It is a fruitful collaboration which leads to the establishment of this future factory”, welcomed the LR president of the Grand Est Region, Jean Rottner, welcoming a “Major investment” who ” do well “ to one “Local economy which really needs it today”.

In a press release, Huawei also indicated that it wanted to build a Brumath “Ecological factory”, using in particular “Eco-responsible construction materials and processes” and limiting “Drastically the energy impact” From the factory.

“This factory will be a benchmark in terms of respect for the environment”, insisted Jacques Biot, chairman of the board of directors of Huawei France.

She “Reinforces Huawei’s commitment to France by boosting skilled employment, a priority axis of our commitment”, he added, evoking a “Virtuous dynamic for the local ecosystem and for the Alsatian economic sector”.

“Our choice is that of” made in France “for Europe”, continued Mr. Biot, assuring that Huawei, as part of the “Design and construction of the plant”, would research and evaluate “With the greatest interest French suppliers”.

Considered the most advanced of the three main suppliers of 5G equipment, the Chinese giant, present in France since 2003, recently announced several investments in France, including the opening of a research center (R&D) in Paris, in the part of a campaign aimed at demonstrating its desire to establish a permanent presence there.

VIDEO HIGHLIGHTS: Arsenal succeed in revenge on the Saints