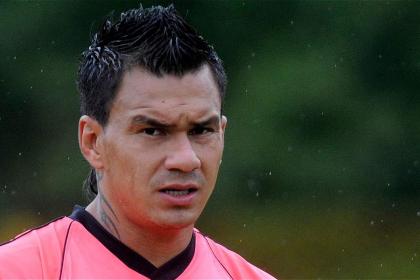 People will wonder, what are former players of the Colombian National Team up to? Humberto Mendoza retired two years ago playing for a Peruvian club. Since then, the bumangués has dedicated himself to continue playing at 37 years old, but outside of professional activity, in amateur tournaments. He, as a fan of Atlético Nacional, stayed in the outskirts of Medellín.

Now he plays soccer as an amateur in Envigado, Antioquia. The experience of a trained player like Humberto Mendoza has potentiated the amateur tournament in Colombia. However, the former central defender is in the eye of the hurricane due to a controversy that surrounds him. Mendoza was known as a defender who didn’t mind going hard on a colleague. A temperamental defender, one of those that is needed in any team. He hits when he knows he has to hit.

Humberto Mendoza plays with a club from Antioquia called Milan. His team faced their similar team from Paixao FC. Mendoza attacked the referee in charge of dispensing justice in the amateur match. Humberto played in Argentina, and in that country they do not forget him, because the Diario Olé dedicated a note to the Colombian. They headlined the news, ‘Violence in soccer: former Colombian national team player suspended five years for hitting a referee’.

The sanction, five years without playing in amateur soccer, appeared on Juan Camilo Uribe’s Twitter. In that tweet, the official statement issued by the Sports Court was shared. The aggression was in the face of the central judge. Humberto Mendoza has not yet said what led him to commit said action. In fact, he has not spoken yet. The match was held on Saturday, July 30.

“A gain of 37,500 pounds” .. The National Bank certificate for one year and profits beyond expectations will not be regretted