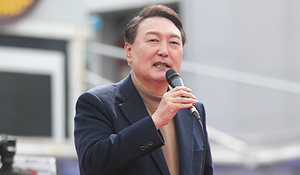 Yoon Seok-yeol, the People’s Power presidential candidate, argued that the government could inflate the number of confirmed cases on the day of the election and block voting on that day. Candidate Yoon brought up a conspiracy theory with a different content while arguing that the early voting could be manipulated within the conservative camp.

Candidate Yoon encouraged early voting on the 4th and 5th at a campaign site in Donghae, Gangwon, on the morning of the 28th, saying, “If we announce that there will be hundreds of thousands of confirmed cases of Corona 19 on Election Day, it may prevent you from voting on that day.”

The quarantine authorities have already expressed their position on these conspiracy theories. In a briefing on the 15th, Kim Gap-jeong, head of the diagnostics team at the Central Quarantine Countermeasures Headquarters, said, “There is an opinion that the government is controlling the number of confirmed cases by suppressing testing, but in fact, that is impossible. You are free to go to an institution that can do it and get tested,” he said.

He also said, “There are about 280 actual testing institutions, and most of them are private medical institutions, so I want to make sure that the government is not a system that can artificially suppress or adjust tests.”

Koh Jae-young, a spokesperson for the Korea Centers for Disease Control and Prevention, also said on the 15th, “There were such false allegations in the early 2020 (the initial stage of the COVID-19 crisis). The opinion that we intentionally reduce our capabilities is false.”

Nevertheless, Candidate Yoon encouraged voting by remarking as if the government had total control over the count of the number of coronavirus cases.

At the campaign site, Candidate Yoon said, “You cannot win by voting on the day of the election. There are many people who do not vote in advance because it is clear that there will be corruption in this election, but the power of our people will launch the Gongmyeong Election Monitoring Team and closely monitor it,” he said.

Conspiracy theories related to the election are also being raised in the conservative camp. The anti-election campaign led by Hwang Kyo-ahn, the former leader of the United Future Party, is disseminating various evidence saying that advance voting is possible. It was a suspicion.