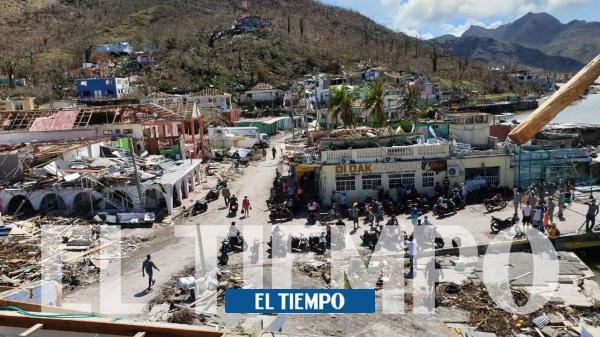 The island of Providencia, in the archipelago of San Andrés, ceased to exist as it was known. Hurricane Iota, converted to category 5, blew gusts at 250 kilometers per hour that took everything away. Everything.

EL TIEMPO was one of the first means of communication in the country to reach this destination located 50 nautical miles from San Andrés. There an unprecedented tragedy was encountered and some 5,000 people in the midst of a genuine humanitarian crisis.

There is no house on the island that has not been damaged. And most were destroyed. Or on the verge of collapse. In a tour of the tracks, which are already somewhat clear, you can see the dimension of the impact on Providencia de Iota, which passed just over 10 kilometers from Providencia.

(We recommend you read: Family survived the hurricane locked for more than 24 hours in their bathroom)

Providencia continues without electricity service, without water and without communications.

Hotels, businesses, the city hall, the hospital, the gas station, the police command, the church. And thousands of homes. Everything is affected.

The two- and three-story buildings located in the center of the city, where the main pier is located, are completely in ruins. And from then on in the neighborhoods, regardless of whether they are coastal or not, the picture is only one: destruction and desolation.

The southern area is one of the most devastated, as most of the houses were made of wood. Concrete structures either dangerously cracked or lost windows, stairs, roofs, and parts.

“The thing in Providencia is total destruction because all the houses are destroyed. If there were 2,000 houses here, they will have to build 2,000 new ones because they all left, including the hotels and inns,” says Carlos Archivald Corpus. And next to him, in the middle of a road, his belongings and his family.

In the Agua Dulce sector, where hostels, hotels and inns used to be located, most are simply gone or only their rubble remains.

(We suggest you read: Learn how you can donate aid for the victims of San Andrés)

There is no house on the island that has not been damaged. And most were destroyed.

(You can also read: Video: during a hurricane, inhabitants took refuge in bathrooms)

Today Providencia continues without electrical service, without water, without communications and with great needs in water, food, clothing, mattresses, tents and construction elements, among others.

But in addition, its inhabitants are still anguished by not being able to report their status to their loved ones.

At the moment, two deaths have been confirmed and dozens of people with fractures and injuries caused by trauma have been referred to San Andrés, according to a hospital source confirmed to this newspaper.

At the airport, which also lost an important part of its infrastructure, dozens of people have been waiting since early morning to board one of the humanitarian flights that are evacuating inhabitants to San Andrés.