Archydearchyde.com
Sport "I am armed with the shield of faith"
Sport

"I am armed with the shield of faith" 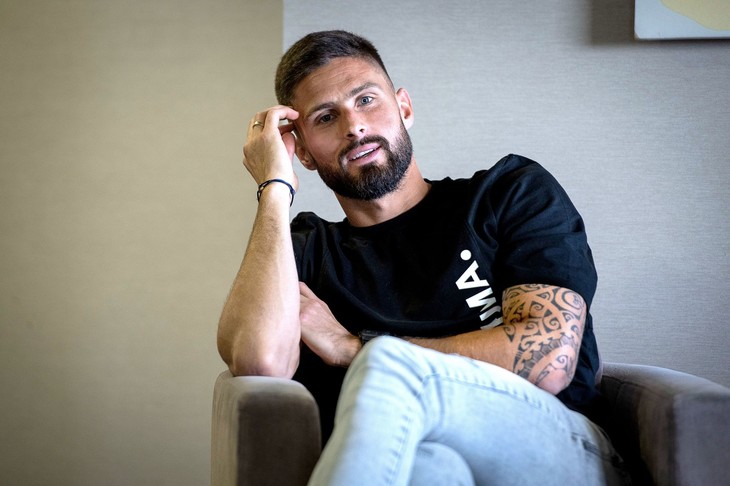 Article published in Pilgrim No. 7141

Pilgrim Magazine: How does the football community react to repeated words about your faith?

Olivier Giroud : I had a lot of good feedback from my family and friends when the magazine Jesus! went out. But less from the players. It's not the kind of magazine they read. Blaise (Matuidi), whose family is a believer, told me that the review was great. I will send a copy to David Luiz, my former teammate in Chelsea (English club, Ed), very believer.

O. G.: I am often asked this question, but no, not at all! I even sometimes talked about Islam with Muslim players, like Paul (Pogba), who converted to it.

Did you talk about faith with Antoine Griezmann, who had Mary and Christ tattooed on his arm?

O. G.: No. But in the French team, I have already given copies of the New Testament containing testimonies of Christian athletes * to "Flo" Thauvin, who is a believer, and Mike Maignan. During the 2014 World Cup, I also went to pray in a church with my teammates Yohan Cabaye and Patrice Evra. I do not necessarily need to be in a place of worship to have an exchange with the Holy Spirit. It's a good thing to share your faith with your brothers, but it's difficult for me because I play often on weekends.

Olivier Giroud, a world champion at the head of the magazine "Jesus! "

I express my faith differently, as in the final of the Europa League in May. Under my shirt, I wore a "I love Jesus" T-shirt. I thought to show it if I scored. But the match was taking place in Baku, Azerbaijan. We were in a Muslim country and this gesture could be misinterpreted. On the other hand, when I scored, I gave thanks to the Lord. David Luiz improvised a prayer. I did not understand it, it was in Brazilian! On the other hand, I showed the T-shirt during the European Supercup against Liverpool in August.

Why did you agree to be editor of Jesus magazine! ?

O. G.: Because I have always dreamed of writing. (Laughter.) No, it was done naturally, in simplicity, authenticity. I did not write directly but these are my words. I hope readers will discover me as a Christian, son of God, and better understand my personality. I would like them to see me as someone who is humble, selfless, who thinks of others. I am invested in several causes that are dear to my heart (sponsor of the European Association against Leukodystrophies, commitment against the persecution of Christians around the world with the Protestant NGO Doors Open …). I hope to set an example.

Sadio Mané, the faith of a Senegalese football star

Recently, I cheered up a young footballer by telling him that no one had the right to break his dreams. When I was 21 years old, my coach at the time told me that I did not have the level for Ligue 1. That might have been true at the time, but these are not things to say to a young player.

Your faith has strong roots. As a child, you went to evangelical worship with your mother, as a teenager, you went to Christian summer camps. Have you never doubted?

O. G.: No. Perhaps because I did not experience painful dramas in my youth that would have made me reject the Lord. I feel very lucky. My pastor, Joel, compared me to the character of the Bible, Joseph (sold into slavery by his brothers before becoming one of the most powerful men in Egypt), because my career has been full of pitfalls. But I still believe that some suffer much worse than me. It's my mental strength.

A documentary The Team you still described as "unloved", when you were competing with Karim Benzema in the France team. Have you suffered?

O. G.: Not even. I was 30 at the time, I was mature. I was angry at public opinion at one point, yes. But not to the Lord. I thought afterwards that it would give me the strength to fight. All the bad things that happen to me, I use to be stronger. Either criticism undermines you, or you turn it into positive energy.

You have faith, a beautiful family, three children, a track record and even, finally, the love of the fans who cheered you on September 10 at the Stade de France when you leave.

Do you have any regrets?

O. G.: I sometimes think of the three grandparents I lost – I still have a grandmother. What hurt me the most was not being able to attend the burials because of my obligations as a footballer … Otherwise, I consider rather that I'm lucky. I am armed with the shield of faith, the helmet of salvation, the sword of the Holy Spirit … And the shoes of the Gospel! (These expressions are taken from the 6th letter of St. Paul to the Ephesians).

Why do you express so much about your faith?

O. G.: It's because of him ! (He points to his pastor Joel). No, I did not wait for him to have faith. I did not particularly want to talk about it, but the Lord put some people, like Joel, on my way. Or the cameraman of the France team, who saw me reading psalms before the matches of Euro 2016 on the bus, while the other players played or listened to music. He asked me if I wanted to talk about it and I agreed. It had an incredible impact.

What biblical figures do you care about?

O. G.: Probably Joseph. When I was little, my mother showed me Bible movies and I remember him very well. And when Joel sent me passages from the Bible about Joseph, it made all these images come up again. His story had touched me a lot. To be honest, I did not read the entire Bible. But I'm working on it. I participate in Bible study sessions with Joel and my other pastor, Jean-Luc.

Was your son Aaron named after the Bible?

O. G.: (He turns to Joel.) Aaron, it's Moses' brother, right? (The pastor hesitates before confirming.) Ah, he is not sure! It's the lose. We wanted above all to give our children names that can be pronounced in both English and French.

How do you practice family faith?

O. G.: My children are still very young. I start talking to them gradually. My mother once told my daughter, before a sunset, that it was God who created her and that she could think of Jesus in those moments. Since when she sees one, she says to me, "Look, it's Jesus. I pray sometimes with my wife. And with my two brothers, my sister and my parents, we have a Whatsapp group (a social network) where we send spiritual thoughts or psalms.

In May, you appeared in a video to support soldiers who participated in the military pilgrimage to Lourdes. Is it important for you to talk to them?

O. G.: Yes of course. Recently, I had the chance to fly an Airbus A400M at the Orleans base. It's impressive. Soldiers said they were touched that I expressed my admiration. She is sincere. When you see that these guys are ready to take balls for their country … We, footballers, do not deserve the same medal as them. There should be degrees. They risk their lives for their homeland. We are only representing it.

You are a substitute at Chelsea, as you were often at Arsenal. But you never criticize the choices of your coaches. How do you accept this situation?

O. G.: Accept? No, I do not accept it. You do not have to be fatalistic in certain situations. I have always been respectful and humble. Even if I do not agree with the coach, I do not criticize him. But in myself, I can not accept it because I know what I'm worth on a field.

Last year, when I felt that I deserved to play, I asked the coach for explanations. It was not easy to leave Arsenal for Chelsea two years ago. I loved Arsenal. But it was a progression because Chelsea is the English club that has won the most titles with Manchester City in ten years. I had competitors in attack – Morata, Higuain … – who ended up leaving. I won at the end: I played the final of the FA Cup in 2018 and the European Cup final in 2019.

There, I leave again in a difficult year (it is competed in attack by the Belgian Batshuayi and the young English Abraham). But as my brother said, I have always built myself in the face of adversity. Although I would like there to be less!

Olivier Giroud in a few dates

January 2018 Transferred to Chelsea. He won the FA Cup in May.

July 2018 World champion. He is knighted by the Legion of Honor.

May 2019 Win the Europa League with Chelsea. He scores in the final and finishes top scorer (11 goals).

September 2019Inscribed his 36th goal in the France team. He is the third best scorer in the history of the selection, behind Mr. Platini and T. Henry.

South Korea believed it had stemmed the coronavirus epidemic, but for two weeks, the situation has deteriorated and the...
Read more

Saint-Etienne: two controllers threatened with dismissal for having removed their visor

Two controllers of the public transport company of the Saint-Etienne agglomeration (STAS), who had removed their protective visor, mandatory...
Read more

The interior of an Amazon fulfillment center in Robbinsville,...
Read more
Sport

South Korea believed it had stemmed the coronavirus epidemic, but for two weeks, the...
Read more

Saint-Etienne: two controllers threatened with dismissal for having removed their visor

Two controllers of the public transport company of the Saint-Etienne agglomeration (STAS), who had...
Read more