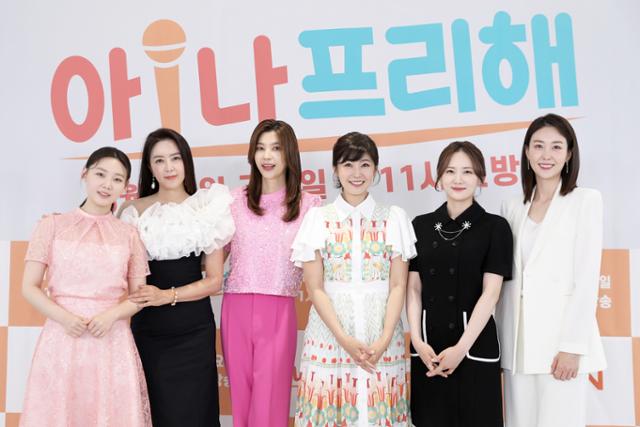 Six free announcers from ‘Anafrey Sea’ have teamed up. The bold talk and current situation of those who left the company they worked for will make viewers happy.

On the other hand, ‘Sea of ​​Anapri’ is a show that realistically shows the announcers from three terrestrial broadcasters who came out of the four major insurance companies and formed the ‘Free Association’ to share their daily life and overcome obstacles in the free world. program. PD Moon Kyung-tae said, “I was looking for a new job and I wanted to illuminate the free announcers, so I decided to plan the program. I thought that if I hired announcers who declared free, it would be more fun than existing entertainment shows. “, he said proudly.

Unlike sports stars, actors, and idols who received great love through entertainment, the lighting for the announcer profession was relatively low. This raises curiosity about the freshness that ‘Anafri Sea’ advocates and the trend flow of ‘anatainer’.

From a fresh face to a familiar first generation

‘Anna-Free Sea’ features announcers legend Hwang Soo-kyung and free announcers first-generation representatives Kang Su-jeong, Choi Hyun-jung, Kim Joo-hee, Kim Ji-won and Kim Su-min. The six free announcers from the three terrestrial broadcasters have worked tirelessly in various fields. Those who declared free for different reasons, such as marriage and childcare, went through a lot of trial and error, and those who achieved dazzling results in their respective places are drawing attention as they come back with a stronger image.

First of all, Hwang Soo-kyung, who claimed to be the oldest, expressed his trembling heart, saying, “I was thirsty for broadcasting. I was grateful for the offer, but I was afraid. Regarding the reason for her appearance, she expressed satisfaction, saying, “(Entertainment) was an unfamiliar and unknown world. It is a style that I am very worried about. When I went to the recording site, I would regret it for the rest of my life if I hadn’t done this program.”

Kang Su-jeong, who stood in front of the public after a long time, showed off her unchanging wit, saying, “I hope the program lasts for a long time. It was so fun and close. I hope you can guarantee more than 20 episodes. My husband keeps calling. My husband and I are doing well.” It is said that she was concerned about the six free announcers as she met through entertainment. Choi Hyun-jung said, “I’m enjoying it more and more. I hope you all enjoy it too.”

Kim Soo-min, who was the youngest announcer in history, but recently announced his retirement and marriage at the same time, became the center of attention, saying, “It was a very fun scene. Personally, I am very happy to be with good seniors.” In particular, curiosity was gathered about her adventure with Kim Soo-min’s marriage and her entertainment challenge after her retirement. He said, “It was natural for me, but many people were surprised. It’s so fun to feel a sense of belonging outside of the company. In the process, her husband’s support and encouragement became a good source of support for her to continue her challenge.

In particular, Kim Seong-joo forms a deep sympathy as the MC. Kim Seong-joo emphasized strong support and said, “I did a lot of programs, but I thought about it a lot and joined late. There was no such combination in entertainment.

As such, the story of the six women’s challenges and the moments of crisis and frustration they had to go through are expected to leave a lasting impression on many people outside the announcer frame. ‘Sea of ​​Anafri’ will be aired for the first time on this day.

You will not believe what will happen to your body when you chew cloves on an empty stomach daily! • Al Marsad newspaper