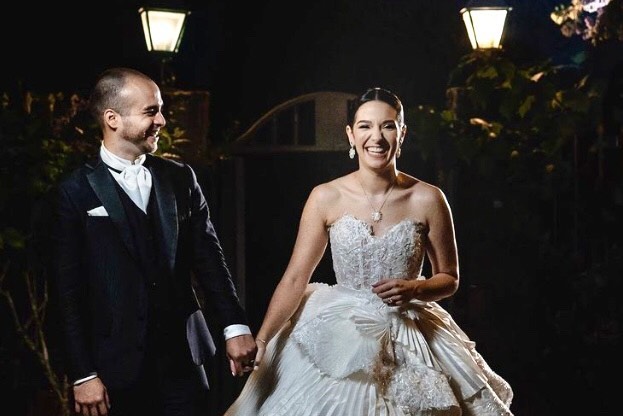 A surprising rain was the prelude to the ecclesiastical bond of Daniela Alvarado and José Manuel Suárez, which took place on Saturday night at the IDon Bosco church of Altamira.

Three months after getting married in civil law, the actors said “yes” in the eyes of God, in the company of your family and friends.

The wedding was called by Daniela and José Manuel and by their parents, Carmen Julia Álvarez Torrente, Dennys Daniel Alvarado Morillo (†) and María Cristina Suárez Maurera.

A union in times of Covid-19. On the temple pews, attendees could be seen wearing masks, goggles, and keeping due social distance. In fact, a PCR test to be able to be there.

At 7:00 pm, the actress and director arrived at the Church dressed by designer Hugo Espina. She wore her hair up, sharp makeup, and an anthology look and smile.

Mauricio Otayek Schwarzgruber, six years old, the youngest son of his friend and colleague Schwarzgruber, was in charge of accompanying the bride on her way down the aisle.

Already in full ceremony, Daniela told José Manuel: “You taught me to fight for me and for me, to love me, to respect me, so today in front of God, with our families and friends, I promise to take care of you every day, to love you even on those days when I don’t understand why we fight even though we never let’s fight”.

For his part, Suárez dedicated the text to Alvarado Simple life, from Facundo Cabral. “I want to swear to you and I promise you that I will give you a simple life, with the things that man forgot, without rugs but with smiles and eyes open to the sun. The best of life is free, there is no poverty having it. God, hope will be our guest and having confidence there will be understanding. “

In their vows, the couple highlighted the spiritual presence of Daniel Alvarado, who died on July 8 of last year, and of the actor’s grandmother.

The sky of Altamira was filled with fireworks as the new spouses left the temple. The clock was above 8:00 pm.

“I think it is the maximum achievement right now, it was something we wanted a lot, to have the blessing of God. We are happy. We are very excited, really,” said Daniela, aboard a Mercedes Benz in which she was already ready to leave with her husband headed to Cantaclaro Gardens, located in El Hatillo, the place chosen to celebrate the reception.

From the vehicle, the couple thanked the support they received from their parents in the days prior to the ecclesiastical marriage.

“Our mothers have supported us, they have run all these days, they have helped us with everything, above all, they have been patient because making a wedding is super complicated and they were a fundamental part of the whole process,” said Alvarado.

Daniela and José Manuel stressed that they did everything in their power so that the marriage took place in a public place and their followers could be present, in fact, the ceremony would initially take place in the Plaza Francia de Altamira, but for Clergy measures could not be so.

For her part, the proud mother, Carmen Julia Álvarez, thanked the public for their affection. “They have told us so many beautiful things, they have been pending, that today they were devoted to those networks. Thanks, above all to God, and to all those who are above.”

Chandelier lamps illuminated Cantaclaro Gardens and, especially, the wedding cake, which exceeded nine floors. The towering dessert was escorted by sweets of all sizes and colors. In a neighboring area, a food fair was set up, in which there was fried chicken, sushi, Italian food and even paella.

Merengue, salsa, urban music and vallenato hits from the 80s, 90s and 2000s were heard on the stage of the place While the assistants danced on the floor and immortalized the moment, through live transmissions on Instagram, videos and photographs.

Around 5:00 am, the group Los Fulleros, to which the first actor Daniel Alvarado belonged and with whom he recorded the hit Negrito Fullerosaid present at the party. By that time, the couple had already changed their outfits for more comfortable clothes for eating and dancing. Daniela wore a blue jean also by Hugo Espina and sports shoes.

Sunday morning began and there were still people on the track, but above all, the spouses, who did not stop kissing and expressing affection. It was not for less, his dream had come true. @yolimer