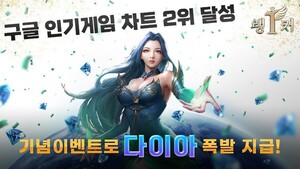 The idle RPG game ‘Ranker’ served by King Kongsoft (CEO Kim Jun-tae) has achieved the top spot in the Google Play role-playing popularity ranking, and a hot-time event is being held to commemorate this.

An official said, “Currently, rankers are preparing a new tournament content ‘Excellent Tournament’, and we plan to show various rewards and the fun of determining the true ranker among users of the entire server.”

‘Ranker’ is a combination of various neglected elements, so simultaneous large-scale neglect is possible, and based on a system that becomes stronger and more colorful through transformation, Berserker, Wizard, and Ranger characters and various active skills with colorful graphics composed for each character and It is a new idle RPG that anyone can easily achieve rank by by maximizing the immersion of the game through the effect.

In addition, it is a multi-platform (PC & mobile) game that King Kong Soft is actively leading, and it has the advantage of being able to play regardless of PC or mobile environment. are acclaimed by

On the other hand, King Kong Soft is holding a hot time event that pays out various items, including a scarlet contract that can summon a new raid boss, from October 8 to October 11 to commemorate the 1st place in ‘ranker’ popularity.

‘Ranker’ can be played by anyone with a PC as well as a smartphone, and can be downloaded for free through Google Play and One Store.

More details about the game can be found on the official website.