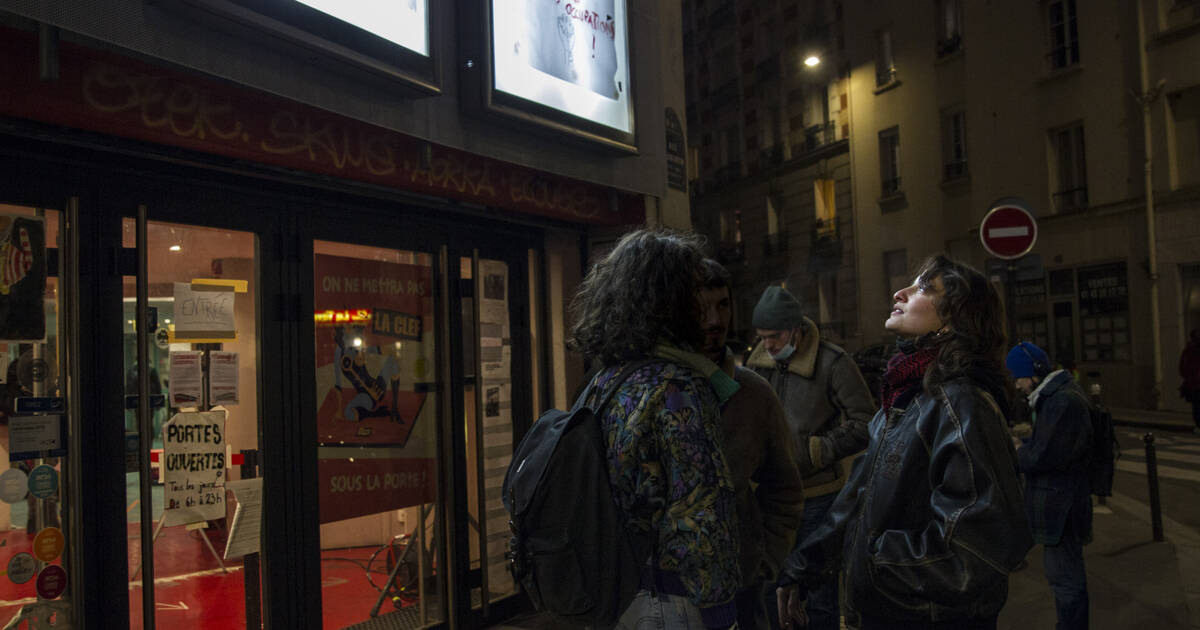 “We will not put the key under the door.” What could be more obvious than a film poster to expose a slogan against the closing of a dark room. They all refer to it on the front of the La Clef cinema, in the 5th arrondissement of Paris. Objective: to convey the message of a struggle that wants to continue to exist. Because the days of the last associative cinema in the capital are numbered.

Officially closed since spring 2018, it has survived thanks to its occupants since September 19, 2019. Threatened many times with eviction, here they are more than ever facing the wall since this week and the visit of a few police officers to tell them that the irremediable will take place next week, starting on January 31. This is the latest episode in a struggle of more than two years between these militant moviegoers and an owner who is looking to sell, the social and economic committee (CSE) of the Caisse d’épargne Ile-de-France.

Especially since the compromise is signed, for more than 4 million euros, with the SOS group, giant of the social and solidarity economy whose overall budget exceeds one billion euros. To finalize the sale, the Key must be empty, which prompted the owner to file a complaint against the police headquarters for still not having ordered the evacuation. According to the occupants, however, the court rejected this complaint, because the procedure is still ongoing after an appeal by the activists to the enforcement judge.

So they were thinking of giving themselves a reprieve until spring, but everything suddenly accelerated. The occupants refuse to see it as the end of a utopia of an associative place dedicated to self-produced and experimental independent cinema, and they are working hard this week to remobilize their support in order to prevent a tragic end.

As you pass through the doors, you can feel the happy militant mess that emerges. First there is the counter where tickets are sold at free prices. This week, films are shown all day, from 6 a.m. to 11 p.m., in one of two rooms, upstairs and in the basement. And then there is this large room, with an improvised bar and its beer dispenser. Leather armchairs and coffee tables right to left. And especially volunteers who move. There for a sign, here with a camera on a tripod or a recorder in hand.

It contrasts with the polite calm of the gentrified streets of the 5th arrondissement in the middle of which this revolutionary block is located. It sticks more, perhaps, to the aspirations that we sometimes read on the faces of the students of the university of Jussieu, just next door. Because young people are legion on the site of this above all political occupation. By its nature, its horizontality, its free prices. But also and above all thanks to the programming that the activists offer. Committed, demanding and above all out-of-frame programming, as we no longer dare to do in the many arthouse cinemas in Paris.

“What is fundamental to understand is that we are a laboratory for dissemination and creation”, explains Claire-Emmanuelle Blot, one of the active members of the collective occupying La Clef. They took advantage of the 600 square meters of the place to create a studio and a residence. Five films have already been produced here. “Normally, we broadcast films in the evening, and we create the day, abounds Eole Bony, another member. We also organize weekly thematic workshops so that the Key is at the center of creation, not just another cinema in the Latin Quarter.

In a corner of the room, female film students are preparing to film the day’s column. Because since the beginning of the week there is one every evening, at 7 p.m. With new supporters who come to defend the Key. There were the elected officials of the town hall of Paris on Monday, whose support is more moral than effective since the city has never used its right of preemption. Directors on Tuesday: Alain Guiraudie, Valérie Massadian, David Dufresne among others. Cinema professionals on Wednesday, and a discreet appearance by actor Vincent Lindon. While waiting for the spectators’ stand, Friday evening, in the presence of the philosopher Jacques Rancière.

“It’s nice to see everyone mobilizing, Lou whispers as she tweaks the final settings. What is horrible is that if it disappears, there will be nothing left for us. There will be no place to present more experimental things, with an audience ready to see them. Léa, another student with a cap screwed on her tinted hair, continues: “If the Key disappears, we are condemned to make conventional cinema, to return to the standards of mass distribution, it is a harsh message for our generation, as much for creators as for spectators.”

The SOS group has nevertheless proposed to the occupying collective to remain at the helm, that the programming does not move, but they do not believe it. They see their action as a liberal offensive in the voluntary sector. “This group is a bit like the ehpadisation of culture”, swings Paola Raiman, another activist. First, there is the political commitment of its director, Jean-Marc Borello, pillar of the macronie. And then the echoes of a management, gleaned from other associations, more ready to make working conditions more precarious to improve profitability. And finally a suspicion of real estate speculation, difficult to evacuate when you know the price per square meter in the district.

“To sell, the CSE had laid down a clause which obliged the new owner to maintain the cinema for at least ten years, explains Aeolus. SOS obtained to increase it to five years by adding 400,000 euros. So many arguments that have completely undermined their confidence in the group, and which it defends itself firmly. “Our method is the general interest, assures Nicolas Froissard, spokesperson for SOS. We have very few criticisms of what we do on the ground, and we work with very militant structures, which work for the common interest.

He regrets the collective’s refusal to work with them, claims to have proposed a concrete legal framework to guarantee their independence. SOS does not want to make a clean sweep of the past, simply to offer a “stability” and an “sustainability” of the place, according to the spokesperson. Words that resonate strongly in the heads of activists for whom the social and solidarity economy is used today to divert the resistance they intend to embody. Anxious not to give in to any compromise, moviegoers prefer to sail by hoisting their own flag, by means of an endowment fund which has already raised 100,000 euros from 1,500 donors.

We are very far from the goal, but they hope, if they are still there in a week, that the strong mobilization will relaunch the donations. Rare white hair in the crowd of supporters, Robert, 76, observes all this with a benevolent, slightly worried eye. He is there to support independent cinema, experimental creation, but not only. He would like to underline the lesson of this kind of struggle which he exposes in the form of a parable: “Some must understand that the dynamic of youth is not the hope of a beautiful storefront, but the anguish of seeing this kind of thing collapse, and seeing the whole of society commodify itself.”

Lausanne – He wants to go from breaker to billboard cleaner