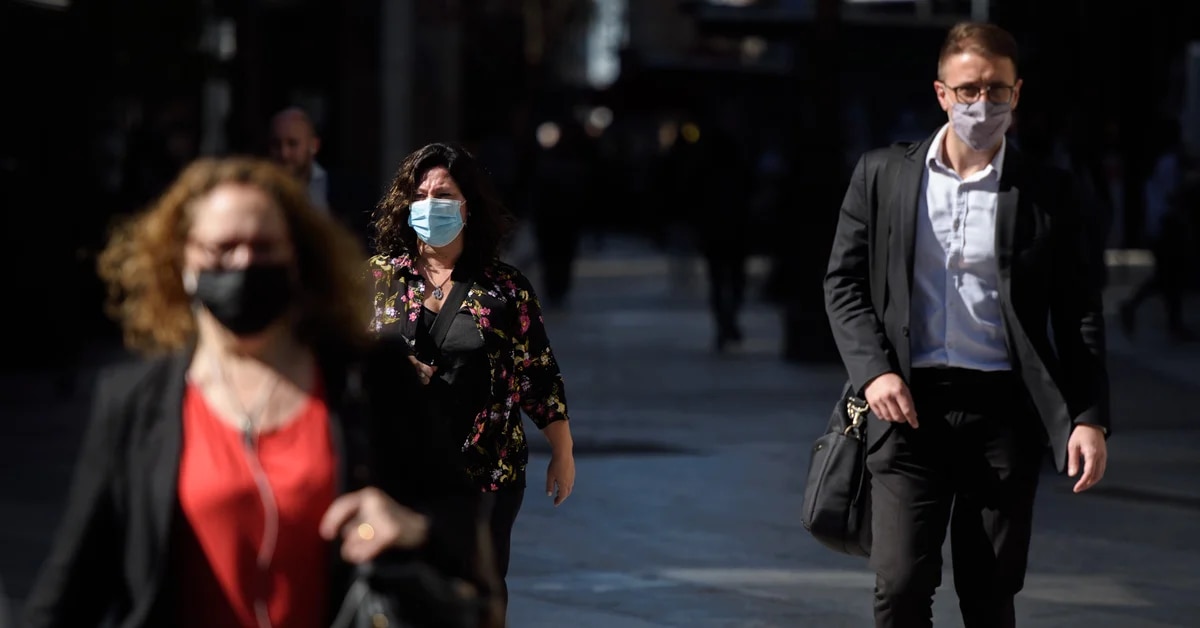 For specialists, “the appearance of new variants can change the landscape as well as the colder weather”

The fourth wave of the COVID-19 pandemic began to take shape in Argentina back in mid-April. The new cases of coronavirus began to increase slowly but steadily, first, and then infections accelerated to a rate that came to concern health authorities.

The analysis of the data shows that after seven weeks with a cumulative rise in new infections of 486%, the last two weeks the percentage variation was 29% downward. The registered cases fell from 46,045 on June 5 to 36,835 on Sunday the 12th.

In its weekly press conference On the epidemiological situation, the Minister of Health of the City of Buenos Aires, Fernán Quirós, stated last week that “As seen in the world, the Omicron contagion curves develop between eight to ten weeks.”

And after assuring that “it is clearly seen that after several weeks of increase and a few days of stabilization, the City of Buenos Aires is in a phase of declining cases”, Quirós highlighted: “This curve is descending, it will probably be completed in the coming weeks, but we have to be attentive to what happens with the new variants (BA.4, BA.5) that are more contagious than the current one, to see if they find a fertile ground to develop or do it later”.

“As seen in the world, Omicron’s contagion curves develop between eight to ten weeks” (Getty)

“The number of cases has been going down for two weeks; From the Ministry of Health of the Nation we see that it is going down now but it is not yet stabilized nor do we know how the seasonality will be. We carefully observe what is happening not only in the AMBA but throughout the country and we do not make future studies regarding this issue”, They assured before the consultation of Infobae sources of the health portfolio.

On whether Argentina is coming out of this fourth wave of the pandemic, this outlet consulted specialists, who, in principle, agreed to emphasize that the changes in the testing criteria as well as the lack of data make it difficult to analyze the situation.

“We have the difficulty that has to do with the lack of data and the changes in the testing criteriabut obviously a couple of weeks ago fewer cases were detected than the previous week and that marks that we are in a reduction process, ”the provincial senator for Corrientes, accountant and expert data analyst Martín Barrionuevo began to analyze.

For him, “The appearance of new variants can change the landscape as well as the colder weather”, and was cautious when graphing the situation in his province: “In Corrientes the cases were falling and a new increase was registered; I think we are more tied to the climate issue and of course to the appearance of new sub-variants”.

“The analysis is no longer as strict and rigid as in previous waves because the data is less and less and especially with the new testing criteria to analyze it, they are more restrictive”he evaluated.

In Argentina, the changes in the testing criteria make it difficult for specialists to analyze the situation (Reuters)

In the opinion of the Ph.D. in Physics, Conicet researcher and Planning Secretary of the National University of Hurlingham Jorge Aliaga “The Federal Health Council (Cofesa) decided in April that they would continue to follow the evolution with sentinel units. It was no longer mandatory to upload negative cases and it was decided to only test sensitive cases or those over 50 years of age.

“I point this out to illustrate that it is not easy to know what is happening, at least for those of us who followed the data (the ministers have access to their sentinel units) – the specialist expanded -. And to make matters worse, since last Saturday the case base stopped being uploaded and two new bases were reported (ambulatory and hospitalized and/or deceased) that does not allow comparison with the previous one. So it seems that the cases are going down but it is not possible to know how much.

Regarding the future scenario, he considered that “It is possible that if the BA.4 or BA.5 subvariants do not appear, the cases continue to decline; all over the world when these variants appeared, the contagions rose again ”.

The infectious disease doctor Roberto Debbag (MN 60253) coincided with them, for whom “What is being seen is that the cases are reducing, but since the data of the jurisdictions is not published, although it is possibly at a time when the fourth wave is smaller next week, it is difficult to make projections.”

“What we see is that compared to the previous two weeks of patient intensity, this weekend and so far this week there is less demand for patients with symptoms and less diagnoses,” he said.

From the perspective of pediatric infectious disease specialist Eduardo López (MN 37586), “Paradoxically, in Argentina, the Ómicron variant circulated with great force during the summer, contrary to what happened in Europe, and now in CABA and AMBA the predominant variant is the BA.2 subvariant”.

On the other hand, while acknowledging that “in recent weeks the numbers have been going down”assured that it cannot be guaranteed that this trend will continue, “more so if one takes into account that winter is ahead and it is known that with temperatures between 5 and 11 degrees according to laboratory work, SARS-CoV-2 has greater viability.

In that sense, López is concerned about the large number of the Argentine population “without a complete scheme and without reinforcement” of the vaccines available in the country. “There are between 20 and 22 million people without a third dose and it is known that for the variants that circulate in the country, be it Ómicron or its sublineages, having two doses is not being adequately protected -emphasized the specialist-. These people are going to have to be strongly encouraged to complete the vaccination.”

And after highlighting that in this context the risk of “reaching winter with a large population without the correct protection” is added that “people reduce the ventilation of environments, meet in closed places and the use of the chinstrap was almost left aside. , which increases the chances of contracting the virus.

For all this, for him “It is not clear” if the country is at the end of the fourth or the imminent beginning of the fifth. And at this point, he concluded: “Although vaccinated people have a benign disease, the risk of spillage is that some percentage will go to intensive care and die, and on the other hand, the greater the circulation, the more likely it is that the virus will mutate. and new variants are generated.

Reinforcements against COVID-19: how vaccination is progressing and why there are differences between jurisdictions
Quirós: “We are in a phase of declining COVID cases in the City of Buenos Aires”
The decline in coronavirus cases continues: they reported 20% fewer infections than the previous week

Four ways to encourage the French to do physical activity