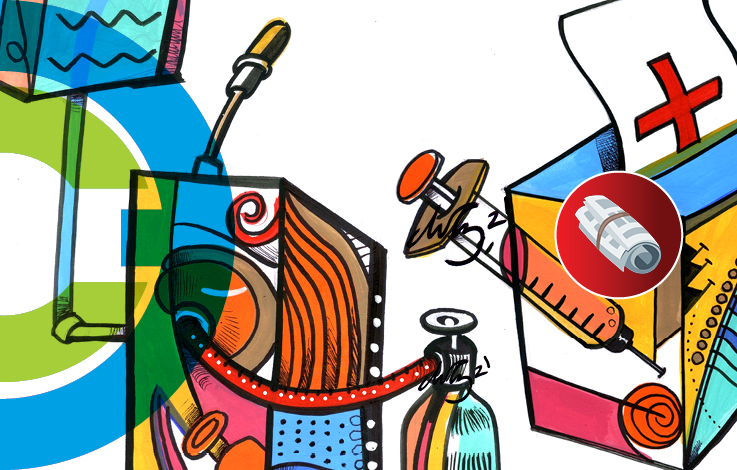 In the mid-19th century, Chancellor Otto von Bismark asked Dr. Rudolph Virchow to make a plan for him to prevent the epidemics that affected Germany. When Virchow made his delivery, Bismark claimed that this was not a medical document but a policy document. “Medicine is nothing more than politics seen through different eyes,” he is said to have responded.

To say that the physician, biologist, anthropologist and politician Rudolph Ludwig Carl Virchow “is considered the father of contemporary pathology” is, in a way, underestimating his contributions.

It is true that his studies on cells were a key element for medicine to put aside the idea that diseases were the product of the imbalance of the body’s humors. However, Virchow made many more contributions in medicine and the social sciences. The most relevant that can be summarized with this quote:

Medicine is a social science and politics is nothing more than medicine on a large scale. Medicine as a social science, as a science of human beings, has the obligation to point out the problems and try their theoretical solution; the politician, the practical anthropologist, must find the means for its real solution ”.

He was referring, of course, to public health and not so much to biomedicine or clinical medicine. In fact, Virchow was convinced that social inequality was one of the root causes of poor health and, for example, organized campaigns to clean up Berlin and thus promote the health of its population.

Many of Virchow’s ideas, Explain JS Makenbach in The BMJ, “they are out of date” and many others were wrong, such as their belief in miasmas or their opposition to Darwin’s theory of evolution, but “due to their deep knowledge of the problems of society, doctors they were also better statesmen, according to him, “and, he adds,” this applies particularly to the notion that entire populations can get sick and that political action may be necessary to cure them. “

For the emeritus professor of the University of York, Jaime Llambias Wolff, who recently participated in the colloquium The health system, the health of the system, organized by the 17 Institute of Critical Studies, with the Covid-19 pandemic some of Virchow’s ideas regain importance, especially in Latin America.

Back to the future

Faced with the coronavirus, in “Latin America we have a triple difficulty,” says Llambias Wolff, “we still suffer what is called the diseases of poverty, which are linked to people’s living conditions”, personal conditions that “have to do with the environment that is unhealthy, polluted and without services such as drinking water ”. Which they do not have, for example in Europe.

In addition, we have problems of rich countries, such as “the aging of the population, a longer life expectancy and a greater exposure to modernity, packaged foods, industrialized foods, chemical products, this makes chronic diseases in Latin America also very present. , unlike in Africa, where they have poverty, but not chronicles, “he explains.

The third factor is that “we do not have the capacity to respond, especially in the public sectors, to these new challenges.” Faced with this problem, “What I propose is not very original. It’s almost a return to the future, ”he says.

In the XIX century There was much talk about medical philosophers, there was a more holistic conception of health. At the beginning of the 20th century, a strong increase in social medicine and public health developed with considerable emphasis in some Latin American countries, particularly in Mexico, Brazil and Chile.

He comments that his native Chile, for example, “was the second country in the world that had a national health service after the English,” but explains that “the will to prioritize social medicine as medical practice and public health as policy of state, where health becomes a right, was undermined ”.

For this social scientist, the advancement and specialization of biomedical sciences, in addition to their benefits, have led us “to a very mechanistic view of health”, a “wrong view” because “we believe that health is only the absence of disease. Even the World Health Organization (WHO) has stated it this way, but health is much more than that ”, it has to do with“ our own quality of life to prevent diseases ”.

This erroneous view has meant that, in general, we worry about our health only when we are sick, “and then we go to the hospital, the doctor and the pharmacy. But we do not worry about health education, about prevention ”. As a society, “we do not worry about understanding that investing in health is not the same as spending on health. There is talk of ‘health expenditure’, but in reality it is a huge investment because it avoids many expenses ”.

No one can deny that a vaccine is good or say that surgery is a bad thing. The problem is that all the resources go there ”, he says.

For Llambias Wolff, health should be internalized in schools, from the first grade onwards, it should “invest in quality of life in eliminating junk food, fighting obesity, promoting exercise, all these factors help prevent let us fall ill ”.

What I am proposing does not belong to the health ministry, but to many other ministries… it should be taught in the municipalities, local governments ”so that public policies are generated in favor of health, and gives examples such as that green areas should be considered in real estate projects or that, just as streets are paved, should “privilege bicycle lanes and have bicycle parking”.

This is only part. The social scientist starts from a simple example of how the cost that goes from cutting down a tree to manufacturing a piece of furniture is something that is reflected in the GDP of a nation; “But if we don’t cut down the tree we are protecting the generation of oxygen”, biodiversity, water and therefore agriculture, “he explains.

In other words, if we don’t cut the trees, or if we cut them down in an orderly manner and replant, we are making life, but none of that enters the GDP. In other words, there is a misconception of economic development or development in general ”.

Llambias Wolff considers that “perhaps this global crisis, so serious, generates the opportunity to understand the interrelation of all these things and the most humble role that we must have in front of nature.” But maybe, no …

Nations against the world

With 37 thousand 633 accumulated cases of covid-19 thousand 376 deaths due to this disease counted until the beginning of this week, and without taking confinement measures practically until the beginning of last November, Uruguay has been an example in Latin America of how to handle the pandemic well . They closed borders, did many tests (they even developed their own), monitoring, quarantines of infected and their contacts.

Crucial for this was the creation of the Honorary Scientific Advisory Group composed of some 50 people, including scientists specializing in medicine, data science and mathematics, explains Rafael Mandressi, philosopher, historian and writer of Uruguayan origin, researcher at the National Center for Scientific Research in France, member of the Alexandre-Koyré Center for the history of science and teacher at the School of Higher Studies in Social Sciences and who also participated in the colloquium The health system, the health of the system.

As an expert on the history of medicine, Mandressi is rather pessimistic. “I do not see substantial changes from this pandemic in the years to come,” he says.

While it is true that the last year has revealed a series of weaknesses in health systems, for example, it has already highlighted the critical nature that environmental issues can have. I do not perceive that it will lead to major transformations, “he says, although he considers it likely that” in some countries there will be some reforms in health systems.

And he adds: “The difficulty in this matter is that the pandemic phenomenon and environmental problems are global, the responses that lead to truly significant transformations would also have to be global. And the impression I have is that not only has there been no progress in that direction, but in many cases there has been a return to a kind of very national vision of the issues, which makes international coordination difficult to be able to face issues that present that scale. I hope I’m wrong ”.

Rudolph Virchow was the creator, among many other terms, of the word “zoonosis” to refer to infections that pass from animals to humans, such as AIDS, Ebola, West Nile virus, avian influenza and now the SARS-CoV-2 coronavirus.

The funny thing is that Virchow did not believe in the theory of germs that Louis Pasteur was developing in France, but he thought that infections were degradations and imbalances of cells (now we know that both were right in their theories about the causes of disease). disease).

But he had studied parasites like the worm Trichinella spiralis, whose life cycle occurs in pigs, but can pass to humans with serious consequences. In a anecdotePossibly apocryphal, Virchow opposed Bismarck’s excessive military budget, so angrily the Iron Chancellor challenged him to a duel. Virchow selected as weapons two pork sausages: one cooked for him and one raw and with Trichinella, for Bismarck, who retired from the duel.This story illustrates one of the ideas coined by Virchow and that have recovered more validity today: medicine and veterinary medicine are closely related.

Now we know, and we are suffering by example, that so are ecology and economics. Finding the “medicines” and remedies for major systemic diseases will not be easy, but it will help if we understand that, paraphrasing Virchow, politics should be medicine on a grand scale.