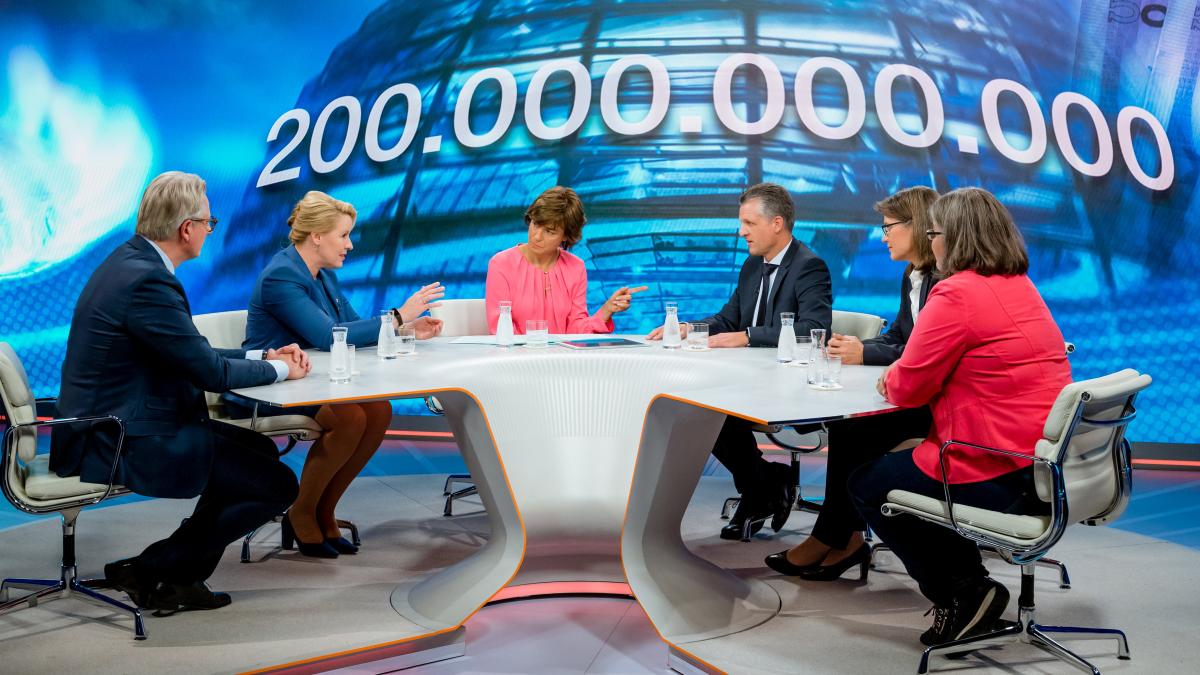 VJust under a week ago, the federal government set the amount of its “defense shield”: 200 billion euros. This is intended to relieve industry and households in the energy crisis: through liquidity support, through the nationalization of gas companies such as Uniper, and above all through the gas price brake. The Federal Government’s expert commission will advise until Monday how exactly the money should be distributed – but the exact plans for implementation are still fluctuating. It could be a month before the money reaches the citizens. Is it too late by then?

Maybrit Illner and her guests discussed this on Thursday evening on ZDF. The governing mayor of Berlin, Franziska Giffey (SPD), defended the “slow” reaction of the federal government to the first parliamentary secretary of the CDU/CSU parliamentary group, Thorsten Frei (CDU).

The “Spiegel” business journalist Gerald Traufetter gave assessments of the possible decisions of the expert commission, while economist Karen Pittel represented the commission herself. As head of Bremen’s consumer advice center, Annabel Oelmann provided an assessment of the current mood among consumers.

Exchange of blows between Frei and Giffey

The federal government is now under time pressure that should not have been necessary, he added. A quarter of a year was spent on the discussion about the gas levy, in which the consumers themselves would have had to compensate for the high gas prices with additional payments. Since the gas levy has now fallen, people who are now dependent on help may have to wait until mid-November – “a failure” when you consider that the CDU had already twice requested the end of the gas levy in the Bundestag Free.

In addition, he sees problems with the 200 billion euros that have been decided: “The solution is not accurate, it does not send the right price signal, it is not fair and it cannot counteract inflation,” he said. “You could have thought the other way around: What is the right tool to fight this crisis? Then you look at what it costs, what you need for it, and then you consider whether it’s the right use of resources”.

SPD politician Franziska Giffey sharply rejected this criticism: “If it had been up to you, Mr. Frei, we would now have a gas embargo, the gas storage tanks would already be empty,” she said. She was referring to a quote from CDU party leader Friedrich Merz in the spring that the federal government should shut down the Nord Stream pipeline before Russian President Vladimir Putin does it.

Fortune in the oven instead of in the depot

Giffey praised the focus that the federal government had placed on precautionary measures and the associated filling of gas storage facilities. The gas surcharge “could have been saved,” she said, but the 200 billion euros that had been decided were a “historic sum”. She added to Thorsten Frei: “If you criticize a solution before the expert commission has even worked it out, I find that interesting. That is our problem, that we always expect that without even a few days of thought, the solutions will be ready on the table”.

“You can wait the four days,” said the economist and head of the ifo Center for Energy, Climate and Resources, Karen Pittel. It is important to find a solution that hits a wide range of people precisely, but can also be implemented in a short time, she said. It is difficult at all to collect precise data on the amount of gas consumption and the financial situation of the consumer. She also doubted whether it made sense to set the 200 billion euros in advance – but the amount was also intended to reassure people: “It’s also a signal that says: ‘Something big is coming'”.

But how exactly should the said gas price brake look like? For business journalist Gerald Traufetter it is clear: “For a start, only a model with a discount comes into question”. Accordingly, similar to the tank discount, a flat rate of four cents, for example, would be deducted from the price per kilowatt hour. Together with the deduction of VAT, this could then save families up to 300 to 400 euros.

But the incentive to save gas is also missing. A solution for the longer term would therefore be the quota solution, in which, for example, 80 percent of gas consumption would be subsidized while the rest would continue to be paid at the normal price.

Franziska Giffey advocated this two-stage solution: “This cap will certainly go for two years,” she said. “It’s right to think about a short-term solution now, but one that will last a little longer.”

Scholz and the energy crisis

Even if she did not comment on the deliberations of the expert commission, Karen Pittel also stated that she preferred the quota solution. The subsidy can be settled for each individual unit or the sum can be paid out to each account, she said. It is important to her to think of low-income earners when designing the instruments in the long term: “We cannot always afford to pay lump sums to everyone,” she said, also with regard to the recently agreed relief package. “You have to think about it, you can give 300 euros to anyone, or the poorest third 1000 euros – or even more”.

The head of the Bremen consumer center, Annabel Oelmann, also recognizes the time pressure that many consumers have: “I’m happy to give you the four days,” she said to Karen Pittel. “But many have the feeling: ‘Even if something comes, it’s too late, I don’t have that much time anymore'”. Many people have already come to counseling with suicidal threats – people who have been saving for a long time and are now standing with their backs to the wall, says Oelmann: “At the moment the main problem is that people have the feeling: ‘Back and forth ‘Right, left’, they don’t know where it’s going – they aren’t reliable at that point,” she said.

Some consumers have already received the letter announcing the gas levy – Oelmann advised them to keep calm and seek help. Many people are now entitled to state aid, for which there are good instruments in Bremen, for example. The most important thing: “Don’t go to the dispo under any circumstances,” she warned.

It is precisely because of the plight of these people that the question of feasibility is so important, according to Franziska Giffey: “You have to find instruments that are fast, reliable and effective and that reach people,” she said. “If lengthy applications have to be filled out – if the hurdles are too high to get there – then people will benefit less from it.” For example, emergency aid would have saved numerous companies from going under during the pandemic thanks to its quick accessibility. If necessary, one could also accept the abuse of these services for the time being – after the emergency, the tax office repaired them, according to Giffey.

Will we be able to save enough? Karen Pittel warns of the alternative if not

The group agreed that it remains to be seen whether it will really be possible to save as much gas in winter as planned. The Federal Network Agency had recently reported an above-average increase in gas consumption in the past week. Now it needs a “joint national effort,” said Giffey.

Finally, Thorsten Frei once again emphasized the government’s responsibility in this regard: “You also have to talk about using all potential, including the biogas cap, after all, you can supply millions of households very quickly,” he said. “Politics must also do everything possible to prevent a shortage.”

The commission of experts will have to be given four more days, for better or for worse. But right now your decision will be essential. “People actually assume that we will make the savings,” said Karen Pittel. “If not, our economy will collapse by up to eight percent.” The preservation of Germany’s industrial location stands and falls with the next crisis.