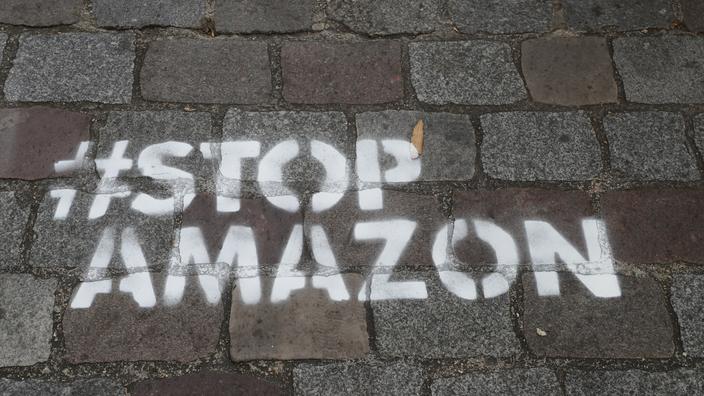 Between 1,500 and 2,000 demonstrators gathered in Montbert near Nantes. They are opposed to the establishment of a site by the American e-commerce giant.

Some 1,500 people according to the prefecture, more than 2,000 according to the organizers, demonstrated on Saturday in Montbert near Nantes, against the establishment of the American e-commerce giant Amazon and denounce the harmful impact of this project for the economy local. “Exceptional mobilization”, welcomed in a tweet the deputy of Maine-et-Loire Matthieu Orphelin (ex-LREM)

Leaving after 2:00 p.m. from the roundabout at Le Butay, the demonstrators, many of whom had come with their families and some on bicycles, walked to the fenced entrance to the future Amazon site, a journalist from the ‘AFP.

“Bezos always wants more pesos”, “Stop Amazon and its world”, “Neither here nor elsewhere”, could we read this Saturday, November 28 on the banners. The event, which was meant to be good-natured, with dance and fanfare, was preceded by speaking and singing, according to the organizers.

“We want to denounce the impact that this project would have on fiscal, social and local economy activity,” Guillaume Erceau, spokesperson for ATTAC 44, told AFP, adding that he wanted to “create a report of strength to Montbert and the community of municipalities ”against Amazon. Already on November 17, 300 people had gathered in Montbert against the Amazon project.

According to the mayor of Montbert Jean-Jacques Mirallié (without label), who defends the prospect of new jobs in his municipality, Amazon wishes to buy land belonging to the community of municipalities of Grand Lieu located on a former hospital wasteland transformed into an area of activity. It is “a surface of 14 hectares to build a building of 50,000 m2 on the ground, on three levels, which means that there is a floor area, with the annex buildings, of 180,000 m2”. It would be a “transit platform” of regional scope and the project which could see the light of day “in 2022-2023” would represent around 1,500 jobs in the off-season and “around 2,000 jobs” during peaks. activity, the city councilor had specified to AFP.

See also – Amazon: “This company does not play along”, criticizes Mounir Mahjoubi