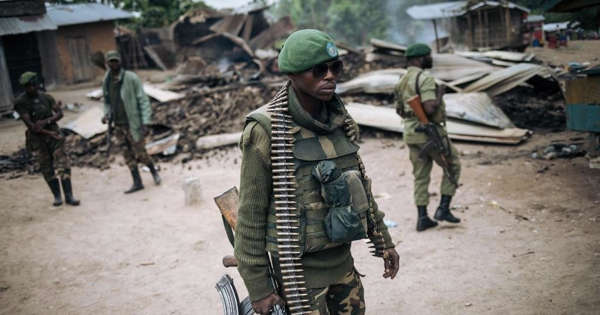 © AFP – ALEXIS HUGUET
An ADF member in the village of Manzalaho near Beni in February 2020 (Illustration image).


Between January 2021 and January 2022, ADF fighters continued to commit attacks against civilian populations, despite efforts by national authorities with the support of MONUSCO and the Ugandan army to neutralize the armed group. During this period, the UNJHRO recorded an increase of nearly 40% in human rights abuses and violations of international humanitarian law attributable to members of the ADF.

With our correspondent in Kinshasa, Patient Ligodi

According to the United Nations Joint Human Rights Office (UNJHRO) in the DRC, at least 1,311 people were victims of summary execution by ADF members, particularly in the territories of Beni, in North Kivu and Irumu and Mambasa in Ituri. According to the UNJHRO, the efforts made by the authorities, Monusco and the army have been insufficient to reduce attacks against the population.

Several parameters explain this worsening of the situation. The UN office observed, he said, that the ADF use modern technological means to monitor localities, the movements of the FARDC and blue helmets. In the same context, the report notes the arrest of a Jordanian who is allegedly involved in training in the handling of drones.

This document also confirms that other local armed groups act in collusion with the ADF. This is the case of the Mai-Mai Kyadenga, whose bases are mainly in the localities of Mamove and Eringeti in the territory of Beni, in North Kivu, and in the territory of Irumuin Ituri.

According to the report, since the start of joint FARDC-UPDF military operations, 13 strikes against ADF positions have been recorded. These led to the dispersal and displacement of the ADF and their dependents from the northeast to the northwest of the territory of Beni and in the territory of Mambasa, in Ituri.

This new dynamic has meant that these fighters also continue to establish themselves in Irumu, where they have established bases in particular in the Zunguluka forest and Mount Hoyo.

However, the UNJHRO welcomes the efforts of the government but notes that the definitive neutralization of the ADF and the stabilization of this part of the territory of the DRC require additional efforts. In particular within the framework of the deployment of a civil administration, capable of providing basic services and resolving the root sources of instability.