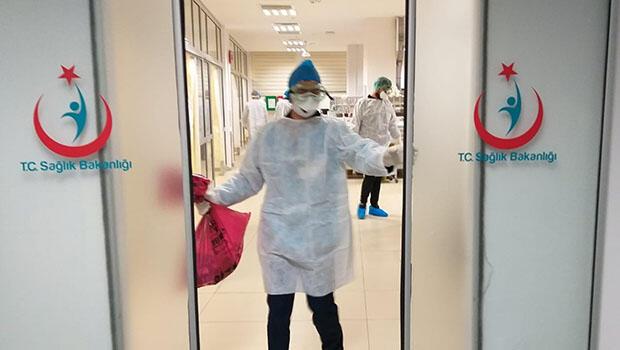 “We have not had any patients with definitive coronavirus so far,” Health Minister Fahrettin Koca said of the suspicion of a new type of coronavirus in Aksaray (2019-nCoV). said.

After her visit at the Elazig Fethi Sekin City Hospital, Koca made a statement to journalists about the detention of some Chinese tourists in Aksaray on suspicion of coronavirus.

“We have not had any patients diagnosed with definitive coronavirus so far. We have had patients with suspicion. In Denizli, Nevşehir, İzmir, Konya
we had suspicious cases. In these cases, the predominantly H1N1 result was positive. Therefore, I would like to say that none of our cases, which are considered suspicious in other provinces other than Aksaray, are coronavirus. Because the results from them were mostly in the form of H1N1. In the incident in Aksaray, a group of 12 people, including a tour operator and driver, together with a 9-person group, but one of these people suspected of having fever, nausea and diarrhea and coming from China, but not from the Wuhan region, a week ago. “

Koca said that a comprehensive guide including how to behave towards the patient group, where to send the samples, observation and quarantine has been published especially in the early coronavirus:

“This guidance framework that all of Turkey in intensive sample submission showing some sensitivity at an early stage we know. I’d say that’s enough of all of our facilities for that, but contacts in the frame. The samples sent from Aksaray did not have more results. Cases that the current coronavirus, called the situation and in particular I would like to say that it was followed up in the early period because of the clinical complaints of diarrhea and fever, which came mostly from China, and then gradually worsened the general condition, and a condition with more lung failure developed. I want to say that it is not. “

See Also:  A little wind of anarchy is blowing over France

“MANY LOCATIONS ARE MADE”

Husband especially pointed out that they shared all the results in a very transparent manner as a ministry in this process, “I am particularly underlining that they are not believed, unless they are given clear information in this regard.” said.

Minister Koca stated that they will make the necessary explanation to the public when the result of the test is made within 1-2 days. “Totally 12 people are not sick. Only 1 Chinese citizen has diarrhea and fever. General condition is not bad. When it comes to suspicion due to coming from China, the guide is is being followed up. ” he spoke.

As part of the Cappadocia trip, 1 out of 10 Chinese tourists coming to the Sultanhanı district of Aksaray came to the Sultanhanı Integrated Health Center Emergency Service due to cough and nausea. Due to the ‘coronavirus’ seen in China, the driver and guide belonging to the tour company that provides the transportation with the tourists and their contacts, were taken to Aksaray Training and Research Hospital in a sheltered and isolated manner, and were taken under observation for precautionary purposes. While making the necessary examinations to these people, a mask was distributed to the hospital staff for preventive purposes.

See Also:  A rare look at the handouts shows which states have ventilators and masks in the middle of the corona virus

THE GOVERNOR: THE MEASURES ARE TAKEN UNDER OBSERVATION

Aksaray Governor Ali Mantı, Health Director at the Governorship building in the evening. He held a press conference with Kerim Yeşildağ. Stating that 12 people, 10 of whom were tourists, were monitored for precautionary purposes, Governor Mantı said:

“Today, at 16.15, in the scope of the Cappadocia tour, 1 Chinese citizen comes to the health center with a cough complaint, 1 Chinese citizen, with a driver and a guide in a 12-person café, in the province of Sultanhanı. Then, in other citizens, they apply to the Training and Research Hospital together. They are taken under precautionary observation in our Training and Research Hospital. There is no problem right now. Especially in social media, ‘such a job happened to the workers in Botaş Salt Lake Storage Area’, the news about such a case is unrealistic. It has nothing to do with the storage area with Tuz Gölü. Only 10 Chinese citizens, 2 Turks came with them, our citizens are just under observation. ”

Provincial Health Director Dr. Kerim Yeşildağ stated that the first examinations of 12 people who were taken under observation were clean. Yeşildağ said, “This is only for precautionary purposes. One of the Chinese citizens has a complaint of cough and fever. When we consider the place it came from, we took it for precautionary observation. The lung films we made in these are normal. We will observe them for 24 hours. We took the blood, sent the blood to the ministry, the results will be released within 24 hours. We will send them after the results come out. Because we keep under observation, we expect the results to come. There is no problem right now, “he said.

Yeşildağ made recommendations for protection from coronavirus. Yeşildağ said, “I recommend this to citizens; As with normal flu infections, we only need to pay attention to hygiene for precautionary purposes. In the same way, what we need to do with flu infections is because we are already on the agenda of the world, we need to isolate and control them, which are traveling. Here we stop and check. We have to conclude this. So we will inform our citizens again, once the results come out. There is no problem at the moment, “he said.