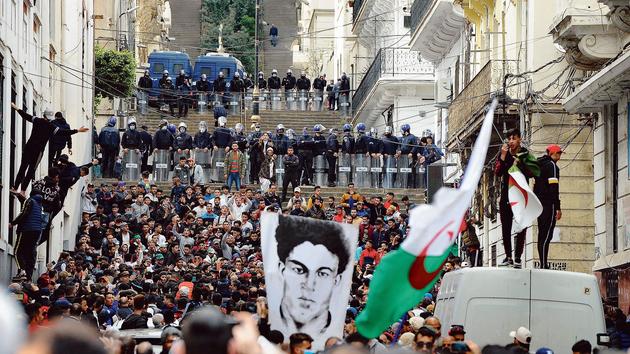 REPORT – On Friday, the demonstrators, who had interrupted their movement for nearly a year because of the pandemic, returned by the thousands to denounce a military power and demand more democracy.

«Look at all these young people. Our generation is not ready to give up.»Posted in front of the gates of the central faculty of Algiers, Mounir, in his twenties, watches the incessant flow of demonstrators parading before his eyes. Yesterday, Thursday, it took more than eight hours to make the trip from Béjaïa (250 kilometers) because of the police blockades encountered on the road. “They blocked us for four hours on a section that we usually do in thirty minutes», Explains the student.

Almost a year after the suspension of the Hirak marches, after the spread of the epidemic of the new coronavirus, the Algerian protest movement seems to be resuming in the streets of the country. Friday February 26, thousands of people went out in several cities to express their will to change “the system».

Read also :Algeria: these sympathizers who tire of a Hirak with no political outlet

The capital, placed under strong police surveillance for several days, recorded its third demonstration in less than a week. Monday February 22, thousands