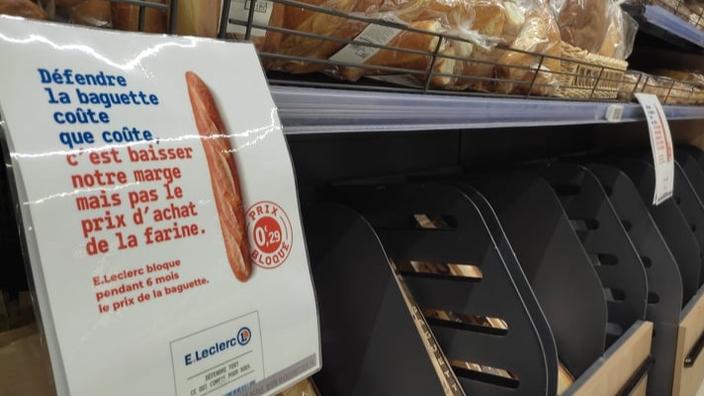 REPORTAGE – Flagship product of the brand for a few days, the first price baguette is not unanimous.

«It goes away on its own. We have already made three carts this morning and the fourth is ready to be put on the shelves“. Traoré, baker in the E. Leclerc hypermarket in Épinay-sur-Seine in Seine-Saint-Denis, is a busy man. For a few days his department has become the star of mass distribution. In question, the communication coup of Michel-Édouard Leclerc, president of the brand, who announced Tuesday, January 11, that his chain would now sell the baguette for four months at 29 cents. A statement that continues to be controversial, but which, according to the employee, has allowed a surge in purchases compared to the 40 cents of the old price. “Sales have doubled“, he rejoices.

Read alsoBlocked price of the baguette: the calculated controversy of the E. Leclerc centers

An impression confirmed by the figures of the sign. “The white baguette represents, depending on the location of the store, between 10 to 30% of sales in a bakery department “explains Leclerc. A good result, but the tradition remainsthe most sold in the E. Leclerc Centers with a price between 0.75 and 0.85 euro“, adds the sign.

Consumers are much less rave about the product. “I take it to make toast in the morning, but it’s just windy, it’s not suitable to be eaten with cheese or the like“, points out Joseph, a 69-year-old retiree, a baguette in his shopping cart. Same story for Omar, 42, “it’s true that a baguette is expensive. Especially when you go to the bakery. But, when I can, I prefer to pay a little more and have quality».

“We don’t know what’s inside”

After hesitating for a long time between first prize and a slightly more expensive traditional baguette, Nouzoud, a 34-year-old mother, chooses the second: “I prefer to eat less and have more quality“, she explains, “and then we don’t know what’s inside“, she concludes. The composition, written on the back, reveals many elements other than the usual wheat, water and yeast. We find in particular emulsifier (E471), flour treatment agent (E300), enzymes…

Aïcha, she did not hesitate. This retiree has a very tight budget and must favor the least expensive: “Before I took traditions, for three purchased, the fourth was free. But since they lowered the price of the baguette, they raised the price of other breads“, she squeaks, behind her mask. Asked about this by Le Figaro, the sign did not respond.

Read alsoFor Valérie Pécresse, the baguette at 29 cents is a “decoy”

After the baguette at 29 cents, a new controversy erupted over the price of pork chops, sold at less than two euros per kilo. If Serge and Sylviane, 68 and 63 years old, have switched to the first price baguette, they do not however have confidence in such cheap meat: “At that price, we don’t really know what’s inside“, raises Madam, “it clearly doesn’t have to be French meat“, adds Mr. Asked about the BFM Business platform, Michel-Edouard Leclerc justified these prices, explaining that they were “clearance“following the Christmas celebrations:”From the moment they haven’t sold them, the pigs are too fat and it costs them too much to keep them“, justified the leader. A shared practiceat System U, at Intermarché“, he added. He also defended himself from strangling the producers: “We will not be the black sheep of the Egalim law“, he concluded.

LIVE – Australian Open: Barty starts his semi-final with a bang against Keys

F1: Daniel Ricciardo “I was jealous of Verstappen competing for the title”[F1-Gate .com]