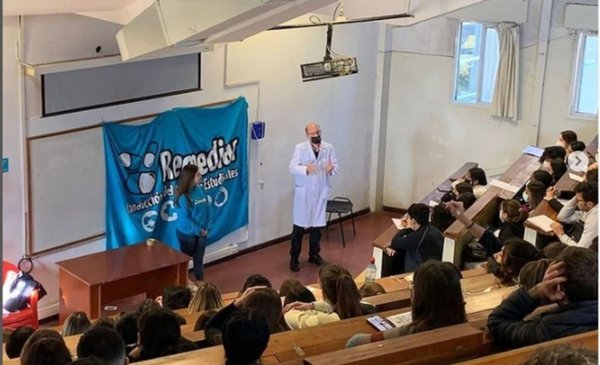 After a bochazo that generated controversy, an anatomy class / IG

In an environment of upheaval without pause in recent years, for the UNLP School of Medicine, even what seems good can be debatable.

At first glance, the arrival of a million dollars for a program to reinforce equipment for scientific research is not common in university life even though the needs of the investigations may be closer to those numbers than imaginable outside the laboratories. This time, the money sent by the National Government will be shared with the Veterinary Faculty, according to the announcement made by the National Government the day before yesterday.

In the hours that followed, another opinion was heard in Medicine regarding the arrival of resources. From the Student Center they came out to express counterpoint with the decision pushed by the authorities of the house of higher studies and accompanied by the Ministry of Science and Technology.

“We celebrate that the Government allocates the purchase of highly complex equipment for the laboratories of our Faculty, which will allow progress in research and development,” the Remediar group, located within the broad Peronist spectrum, close to the management of the deanery, opened its message. . The message that was spread in those hours continued with a “but”: “We understand that the current situation that the hundreds of students who inhabit it are going through is very complex.”

Thus, the group expressed that “we need to guarantee an increase in the budget received by the Institution, to achieve quality courses, academic training and the permanence and graduation of all our compañerxs”.

The position is part of a claim for a complete return to the face-to-face class format. That was abandoned due to the preventive measures in the Covid-19 pandemic and began to return more slowly than the expectations of that, other groups and representatives of other cloisters.

In the Faculty, he maintains that attendance collides with the provision of human resources and infrastructure to meet the demand of a community with around 8,000 entrants this year and a total enrollment in the Faculty of around 33,000. That is a quarter of the total number of students studying in the 17 faculties of the UNLP.

The student population in Medicine grew strongly after the cancellation, at the end of 2015, of the qualifying admission course (due to the reform of the Higher Education Law, which prohibits these instances). Until then, with around 3 thousand students, the faculty admitted between 300 and 400 per year.

Between 2020 and 2021 everything worked with classes through virtual platforms and limited practical activities. The scheme began to crackle earlier this year.

The student caucus on the board of directors just sat down in the dean’s election session when they obtained a signed commitment from the candidate -to be re-elected-, Juan Basualdo Farjat, on the return to face-to-face classes.

In those days, a deanery official resigned with complaints about the lack of attendance, both in administrative procedures and in those completed.

All of this coincided with student complaints about massive postponements derived, they said, from the impossibility of registering on the virtual platform to take the test.

In those days there were other resignations of professors, dissatisfied with the academic management and training. A controversial withdrawal was added, from the renowned infectologist, Silvia González Ayala. The teacher assured that she was retired without requesting it.

Everything got worse in recent weeks: in an Anatomy exam (first year) he failed 80%. There was also a big blow in Infectology. Last week, the board of directors resolved to delve into the results of the tests of the first-year subjects.

A source from the presidency of the University indicated yesterday that Medicine is the beneficiary of a program to provide teaching positions and infrastructure that has been running since before the pandemic and continues to run.

For its part, from the Student Center they insist on their budget claim to strengthen the teaching of classes.

As they pointed out in the message that was spread in the last hours, they are collecting signatures with that objective.

The UNLP received the money on Thursday, in an act headed by the head of the Cabinet of Ministers of the Nation.

Veterinaria will buy a JEOL JEM 1400 (HCD) Transmission Electron Microscope (TEM), which will be installed in the Central Electron Microscopy Service of that academic unit and will be used for teaching tasks, scientific research in the biological field and provision of multidisciplinary service. Meanwhile, Medicine will purchase a NextSeq 2000 Sequencing System (Illumina, Inc.), which will be assigned to the Center for Basic and Applied Immunology Research (CINIBA).

“Royal road” to the semis at Wimbledon: is it now or never for David Goffin?