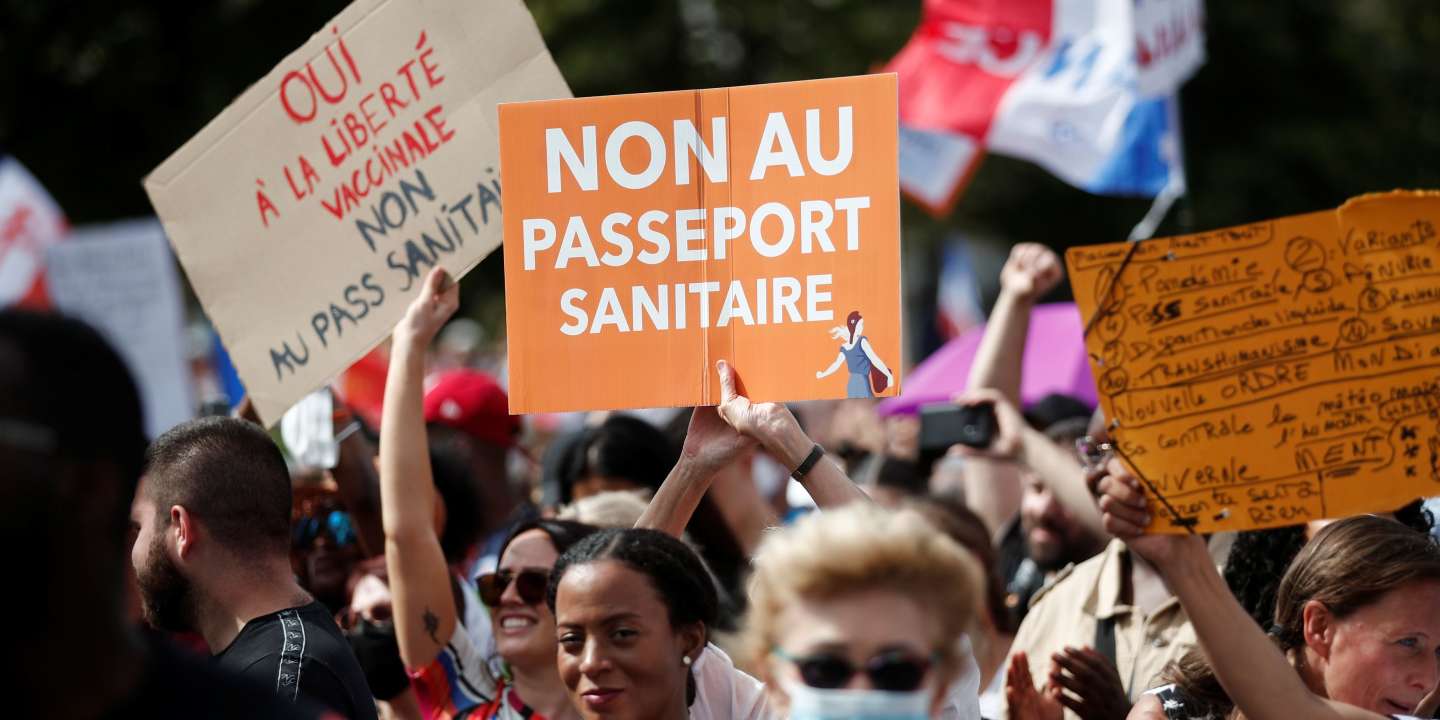 ” Freedom “, “Hands off our children”, “We are not guinea pigs”, “Macron resignation” : behind joint slogans against the health pass and the government’s vaccine policy in the face of Covid, demonstrators with extremely varied profiles marched Saturday, July 24 in Paris in several separate gatherings bringing together 11,000 people in total, according to the police.

Read also Covid-19: the mobilization against the health pass is increasing, 161,000 opponents marched across France

In the Parisian processions, between Marseillaise and song of the International, yellow vests, supporters of rebellious France, far-right activists but also anti-vaccines, defenders of various causes, employees worried about the risk of dismissals if they refuse to be vaccinated or young people mobilized for the first time expressed their concern, their anger against the government and, often, with violent words, their hatred towards Emmanuel Macron.

In the middle of yellow vests, Stéphane V., 50, computer scientist in Paris, expresses immense and very deep rage. He is convinced that France has entered into a dictatorship. “It’s out of the question to let it happen”, said this father of three children, who came accompanied by his son. “You imagine that they will be able to fire someone who is not vaccinated! “, he doubts, while the government bill, currently under consideration in Parliament, makes the refusal, in the long term, to present a health pass, a reason for dismissal for the professions concerned. Because it is necessary “Feed your family”, Stéphane received his first dose on July 19 – after the announcements of Emmanuel Macron. He will do the next one on August 19 but saw it very badly, because he had no choice. His words are violent – published, they would likely face prosecution for incitement to murder. His son puts his hand on his arm so that he shouts a little less loudly. Without success. ” The (Emmanuel Macron) forces us to go to the street, we will not let go ”, says this man for whom Mélenchon defends the best policy.

Defiance and refusal of “surveillance”

A little further in the crowd, who regularly insults the police and gendarmes (“Whores at Macron”), Eliane Duhec, 70, retired from public assistance where she was medical secretary, protests against what she considers to be attacks on democracy. “We always imagine that freedom is a given, but it is undermined. The past is a deprivation of liberty for part of the population ”. Originally from Fontenay-aux-Roses (Hauts-de-Seine), she came to demonstrate with her 38-year-old daughter under a sign “In the name of all resistance fighters who died for freedom, let us be worthy”. Support of the yellow vests from the beginning, activist of the animal cause, she says she does not want to let go. “We mistreat animals in an industrial way and we end up treating us in the same way”, she asserts. “We have lost all confidence in politicians”, adds his daughter, a master’s graduate, employed in the ecology sector. The same mistrust of the media, perceived as propaganda tools that mother and daughter circumvent by obtaining information on Youtube. Both say they are convinced that treatments exist against the Covid but that, for reasons of economic interest, they would have been prevented.

You have 50.57% of this article left to read. The rest is for subscribers only.