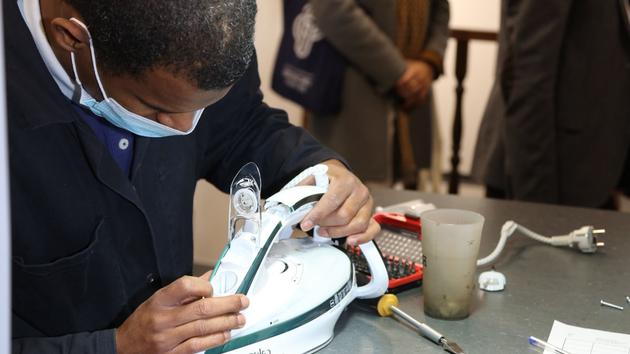 The heavy weight of the small household appliance launched a repair workshop with an insertion organization.

Porte de la Chapelle in Paris, the leader of small household appliances SEB has just inaugurated a place of a new kind, called RepareSeb. Open to the public, this 900 m2 is dedicated to the repair and reconditioning of products, with a view to reselling or renting them (fondue or raclette set, heating robot, etc.). Launched at the start of 2021 with Groupe Ares – the leading player in integration through economic activity in Île-de-France – the site employs around ten people trained in the profession of repairer with a view to accessing stable employment after fifteen months.

The objective is to reach around thirty employees in professional integration each year. “RepareSeb is at the crossroads of the solidarity economy (with the resale of second-hand products), the social economy (by allowing professional reintegration) and the economy, because we want this social joint venture to be profitable”, explains Thierry de La Tour d’Artaise, CEO of SEB. In France, SEB can count on 200 repairers, independents who have their own shop.

Not enough. “There is a lack of repairers, recognizes the leader. Boulanger and Darty are interested in managing the second life of the products, with RepareSeb. ” SEB has invested less than 1 million euros in the project, where its own technicians work. The city of Paris has contributed 350,000 euros and the region for 121,000 euros. “The repair economy must be embodied in places serving Parisians, supports Florentin Letissier, city deputy, in charge of the circular economy. This is why the city got involved in the project. ” If this first test is successful, other RepareSebs should open in France.