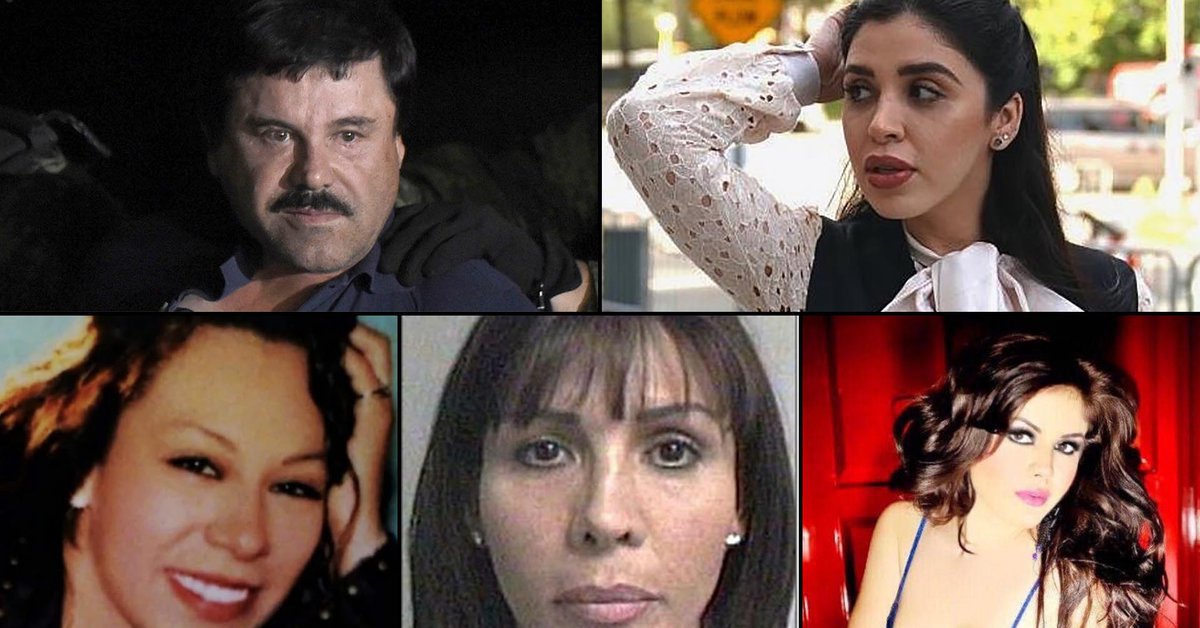 The Mexican boss would have had 18 children with seven different women (Photo: special)

Being the partner of one of the most famous drug lords in the world could translate into having your life practically settled, but in many other cases it also implies having to pay a very high price.

If there is a characteristic that defines Joaquín “El Chapo” Guzmán, is to be a quite womanizing man. Not for nothing the criminologist Monica Ramirez, who had the opportunity to interview him on different occasions, described him as a man “addicted to women”.

Before the criminologist, he formally recognized 10 couples, of which some had very unfavorable outcomes: they were arrested in Mexico and the United States or are under the sights of the highest echelons of the American police, although there was also a case in which one of his girlfriends was brutally tortured before she died.

Colonel, arrested this Monday in the state of Virginia, on the outskirts of Washington, faces a minimum sentence of 10 years in prison and one maximum life sentence, plus a possible $ 10 million fine, if convicted of the criminal charge against her. During the first hearing on the case, the judge Robin Meriweather, of the federal court of the District of Columbia, granted the request of the Prosecutor’s Office to keep her temporarily detained in Virginia before the trial, considering that there is a “serious risk of escape”.

She is the current wife of the capo and since she rose to fame she has stood out for her particular style and her unconditional support for the drug trafficker.

Emma Coronel was born on July 2, 1989 in California, but it was in Mexico that she grew up.

Until the age of 17 her life was like that of any other young woman. But things changed forever after she was crowned queen of the Coffee and Guava Festival, drawing the attention of Joaquín Guzmán. Although she had a boyfriend at that time, “El Chapo” was conquering her with “details” and, finally, he “fell in love”.

A remarkable characteristic of Emma is that she has patiently endured each of the scandals that have linked her husband to other women.

Dámaso López Núñez, alias Graduate, said the former beauty queen helped coordinate the escape of the Chapo of the Altiplano Prison in July 2015.

The former partner of the leader of the Sinaloa Cartel said that Emma gave him “instructions” to evade the authorities of the Altiplano prison, from where he escaped through a tunnel that led to his cell. According to his statement, Coronel spoke with the other members of the cartel to coordinate the escape and could even have infiltrated the prison with a GPS watch to guide the excavators.

One of the few photos of Zulema to be found on the web.

His body appeared in the trunk of a car on December 17, 2008. On several parts of his body he had the letter z, the initial of one of the rivals of the Sinaloa Cartel who hated El Chapo the most: The Zetas.

The journalist Alejandro Almazán told Infobae another version of the murder of Zulema. His source was a person very close to Chapo Guzmán’s ex, who had told him that she and her brother had committed a robbery that ended up costing their lives.

Zulema had an affair with Guzmán Loera during the capo’s stay in the maximum security prison in Puente Grande, Jalisco, where they both met.

His full name was Zulema Yulia Hernández. She was raised by a prostitute and grew up in a deprived street environment. He never knew his father.

The story goes that Zulema loved El Chapo, but maybe he just used her. (Photo of Zulema: SinEmbargo.mx)

Psychological studies that were performed on him revealed that the streets forged a personality manipulative, demanding, extroverted and exhibitionist.

His first admission to prison was at the age of 19. She had been locked up for the crimes of assault and attempted kidnapping. At that time, he was sentenced to 35 years. But given the commotion and the control she had exercised in the Oriente Prison, the prison authorities decided to transfer her to a maximum security prison.

That was where he met El Chapo, who had the power to have all kinds of women brought to his cell. Zulema was one of them.

In an interview with journalist Julio Scherer, Zulema spoke about the “traumas” he shared with the capo, trying to give some explanation to the bond that united them for some time: “The same dread that he felt I feel. That was a thread of understanding between us. I was also poor, I suffered a lot and to date I suffer from an unbearable mother. He suffered the yoke of a father, the abandonment of the father, the one who ran him out of his house and sent him to work with his grandfather, to the lands, day and night. He lived it and how he overcame it, how he had to overcome himself, how he had to become a man like the one he is and all the empire he made”, He assured.

The relationship between the deputy and the capo began in 2011 (Photo: Special)

His full name is Lucero Guadalupe Sánchez, At the age of 24, he had achieved something unusual: reaching a local council in the state of Sinaloa.

A law graduate, her professional career seemed to be on the rise until she met the famous drug trafficker at a party. At that time I was 21 years old.

At that time, Guzmán Loera was not only a fugitive from justice, He was also married to Emma Coronel since 2007.

According to reports from the authorities of the Altiplano Prison, another maximum security prison, one day in 2014 Lucero Guadalupe entered the penitentiary with a false identification. Those responsible found out and said that he had done it to meet with the capo.

The problems began when the prison authorities filed a complaint against him for the use of false documentation. Despite the accusations, at all times he denied having any connection with the founder of the Sinaloa Cartel. “I’ve seen it on occasion, but not up close”, He stated in an interview.

He even assured that trying to link her romantically with “El Chapo” was a distraction to divert attention from the real problems of Mexico.

Later he confessed that only “held a call“With the capo, who from jail would have asked him for advice on the alleged attacks suffered by his underage children due to the Navy raids on his properties.

The local Congress removed her constitutional protection as a legislator, so she fled Sinaloa and was arrested in the United States in 2017, where she requested political asylum, which was denied because in Mexico she was wanted by the courts.

She is currently detained in that country, accused of cocaine trafficking, and could receive a sentence of up to 20 years in prison.

“To this day I am confused, because I thought it was a relationship”, He said during his statement against Guzmán Loera, a trial in which he agreed to participate to obtain a reduction of his sentence.

She was Chapo’s first wife. His family is linked to Héctor Luis Palma Salazar, another drug lord known as El Güero, a partner of Joaquín Guzmán.

They both married in 1977 and procreated Iván Archivaldo, Jesús Alfredo, Alejandrina Giselle and César Guzmán Salazar

Jesús Alfredo, better known as The Alfredillo, is on the list of the most wanted by the DEA.

The United States included her on its list of people with whom it is prohibited to do any type of business. María Alejandrina was singled out for participating in the Sinaloa Cartel’s money laundering network.

She was the Capo’s second wife (Photo: File)

Griselda married El Chapo in the mid-eighties. With her he had four children: Joaquín, who is known to have studied business administration; Édgar, executed in 2008 in Culiacán; Ovidio and Griselda Guadalupe.

López Pérez, who also calls herself Karla Pérez Rojo, was arrested in Mexico in 2010, because her financial records showed income higher than that reported to the Treasury, but she was released after giving her statement to the public prosecutor.

Emma Coronel will remain in prison: she would face a sentence of 10 years to life in prison
They released the first photo of Emma Coronel arrested in the US
CDMX Prosecutor’s Office investigates former capital police commanders who provided protection to La Unión Tepito