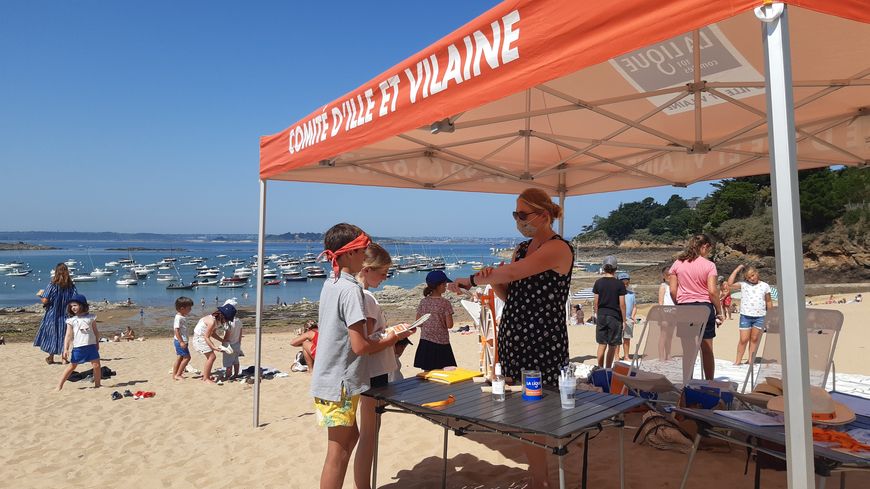 Brittany is the region in France which records the most cases of skin cancer. Each year, nearly 1,300 patients are diagnosed. This Tuesday, July 20, the League against cancer of Ille-et-Vilaine went to the beach of Grande Salinette in Saint-Briac-sur-mer. She offered passers-by to test their knowledge and the level of protection of their sunglasses.

Under the orange arbor of the association, Marlène Robert is responsible for prevention. “Few people know that Brittany is the region which records the most cases of skin cancer each year. Most people think it is the South of France. The UV index is as strong in Brittany as in Corsica, for example. Here, it is cloudier, cooler. People forget to protect themselves. They also believe that it is the heat that causes sunburn. They are in fact the ultra-violent. It is misleading because we do not see them. “ For the League Against Cancer, it is important to educate holidaymakers, but also people who work outdoors “Like oyster farmers, landscapers, etc.”.

Games to educate the most vulnerable

During this prevention day, the members of the association tested the knowledge of the volunteers. Games were also offered, a way to educate children. They constitute a particularly high-risk audience. “Before fifteen, it’s very dangerous for later. Today there are UV-resistant t-shirts and tents. We can see that society is aware of the risks. “

At 10 years old, Manon retained a lot of information after participating in a goose game made by the association. “I learned that ultraviolet rays go through everything! “ Oscar also discovered things. “I learned that you can get sunburns in the eyes, in the retina. That’s why we have to wear sunglasses ”. The advice is clear: you must avoid exposure between noon and 4 p.m., apply sunscreen regularly and wear sunglasses, a hat and a t-shirt.