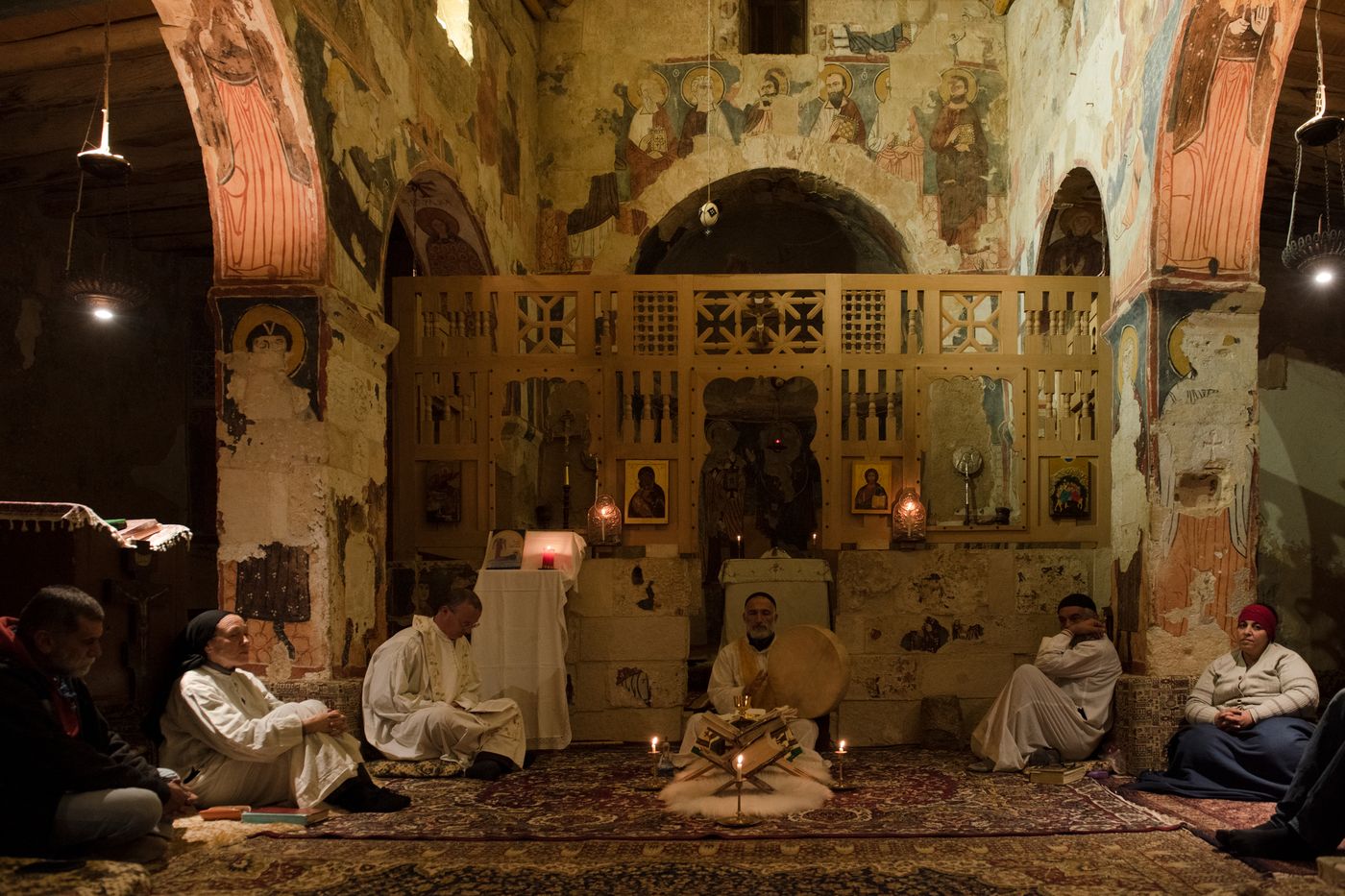 There are places of peace and serenity that carry within them an invitation to withdraw from the tumult and heal one’s ailments. For more than twenty years, the Syriac Catholic monastery of Mar Moussa, perched in the middle of the desert two hours drive north of Damascus, was one of these refuges for Syrians and foreigners of all faiths.

→ READ. In Germany, historic conviction of a former Syrian officer

Today, most of its followers have lost their way, bruised by the convulsions of a fratricidal war. But the vocation of the place and of those who live there remains intact.

To reach the monastery, you have to climb a long staircase carved into the stone. / Hasan Belal

At the foot of the long staircase carved into the stone, a panel « Silence please ! », rusted by the years, recalls these times of affluence when one pressed to reach this place built in the VIe century in homage to Saint Moses the Abyssinian. “The climb of the stairs is what surprised me the most when I arrived here”, remembers Don Mario, in front of a steaming tea. “That and the little doors where you have to bend over backwards to get through!” »

Originally from Italian Piedmont, he has been enjoying a “Erasmus for priests” to withdraw from its three parishes and “to experience” his call from Mar Moussa. “This place is a source for me. It’s not always easy to embrace changehe said, warming himself by the purring stove. But we must assume a simpler way of life. »

The Al-Khalil community (“Friend of God”, in Arabic from the name given to Abraham in the Koran) currently has nine members. It is gradually coming back to life with the end of the war that has ravaged Syria since 2011, although an orphan since the death of its founder, Father Paolo Dall’Oglio.

→ ARCHIVE. Syria: after the war, life resumes in Mar Moussa

This Italian Jesuit, who would be 67 today, was captured by Daesh on July 29, 2013, in Rakka. His absence and the mystery that surrounds him haunt the place, even for those who did not know him. “I try to know his thoughts by reading about him, says Brother Mario. He was a lover of Islam who defended the idea of ​​universal brotherhood. I feel a harmony with him in my heart. »

Brother Jacques Mourad, who was his first disciple and spent many years with him bringing the ruined monastery back to life in the 1980s, maintains this precious heritage. “He remains present through our commitment”, assures the priest, who spent nearly three months in the hands of Daesh in 2015, before being spared by his leader and fleeing with the help of a Muslim friend. “I am alive thanks to Baghdadi, he jokes. He decided to “give me life” because the Christians in the region had not borne arms against the Muslims. »

Over the years, the war, the disappearance of Paolo Dall’Oglio, the kidnapping of Father Mourad and the departure of certain members, then more recently the Covid-19 epidemic have forced the community to cease part of its activities. day-to-day activities, such as major renovations, the production of honey, cheeses and jams. But the members of Al-Khalil remain an essential pillar for Christians and Muslims in the region, and maintain this “coexistence”, in the wake of Charles de Foucauld and Louis Massignon.

The specter of the monks of Tibhirine

In Nabek, a town located about fifteen minutes by car below the monastery, Brother Jihad supervises the construction of a new school on three floors intended to better accommodate his 170 students, including eight Christians. “During the fighting that lasted 25 days in November and December 2013 between regime forces and opponents, no Christian left Nabek while several local young people had joined Daesh”, welcomes the prior of the community, a 44-year-old Syrian.

“Our presence was very important for the Christians of the region. The fact that we stayed helped them, confirms Sister Houda, a Syriac Catholic nun, who has also lived in Mar Moussa for almost thirty years and kept the place alive during the war.

Community members are essential pillars for Christians and Muslims in the region. / Hasan Belal

The question of leaving certainly arose when the fighting approached the monastery, located in the vicinity of a military base. “But we decided to stay,” says Sister Houda. Mar Moussa was to remain a light in the chaos. The nun, originally from Damascus, nevertheless remembers certain moments of anguish, such as when a man stood on the promontory above the monastery and screamed, with a terrifying echo: “You are infidels, Christians! We will kill you! »

“We of course thought of the monks of Tibhirine, she confides, ready like the others for martyrdom. We barricaded ourselves in the church which was the safest place when there was shooting around. »

“The war has tattooed our hearts”

The decade has sometimes left a bitter taste. “The war has crushed us, tattooed our hearts, affirms the Syrian monk, on the small path of the caves where those who feel the need to withdraw to the back of the monastery. We got angry with God. » To calm down and maintain its dialogue with the divine, the community meets morning and evening, in its church of refuge, a jewel which reflects all the eras of this palimpsest place.

→ MAINTENANCE. Archbishop Gollnisch: “No Christian from the East leaves his country gladly”

At the hour of meditation and mass, Sister Houda covers her pulled hair with a black veil and puts on a white tunic. Father Jihad caresses the tambourine before saying mass in Arabic, in front of the multicolored faces of the Last Judgment fresco. Here, we sit on the floor covered with thick carpets, at the height of incense. Once this time of meditation has been shared, the community gathers for a frugal meal prepared by Nadima, the cook, one of the two lay people of the place with the indispensable Youssef.

That evening, we chat over a soup and marinated apricots. “I have always felt this need to build bridges in my life, explains a lay postulant from Italy. The journey to reach Mar Moussa is underway », she slips.

The community looks to Mar Elian

“There is a real renewal of community life, rejoiced Father Mourad. It does us good. » Encouraged by these budding vocations, the priest looks to another place to revive, Mar Elian, near Al-Qaryatayn, about fifty kilometers north of Mar Moussa. This Syriac Catholic rite monastery founded in the 5th century, affiliated with the community of Mar Moussa before the war, was destroyed by Daesh attacks in August 2015 which broke the sarcophagus containing the relics of Mar Elian (Saint Elias), revered for centuries by Christians and Muslims. Black inscriptions left on the walls of the buildings still recall those dark hours. “We came like hungry lions and you are a good meal. »

Father Mourad, who officiated in this parish for fifteen years, hopes that his return “will mark a hope for Christians”. Once the vines and olive trees have been replanted around the monastery, the monk wants to bring back those who left during the war: the city once populated by 2,000 Christians now only has a handful. “The example of Qaraqosh in the plain of Nineveh where Iraqi Christians have returned is a great consolation”, he explains. A hyphen as the community knows how to draw.

This rebirth will also go through the reconstruction of the monastery and its chapel, as Brother Jacques had done with Father Paolo in Mar Moussa more than thirty years ago. ” We have a direct responsibility, we must revive this parish ofAl-Qaryatayn, he said, it is not the will of God that it be emptied of Christians who have been there for two thousand years! »

Almost a thousand years of history

The monastery finds its origin in a small basilica built on the ruins of a Roman fortification. The current church of Mar Moussa dates from 1051 and was for a long time the only building.

Mar Moussa takes off in the XIe and XIIe centuries, before falling into neglect in the 17the.

in 1982, the Italian Jesuit Paolo Dall’Oglio rediscovered the place for a retreat and decided two years later to renovate it with volunteers.

in 1991, he founded with Brother Jacques Mourad a mixed monastic community, dedicated to prayer, work, hospitality and dialogue.

From 2000 to 2015, the community of Mar Moussa is reviving another Mar Elian monastery.