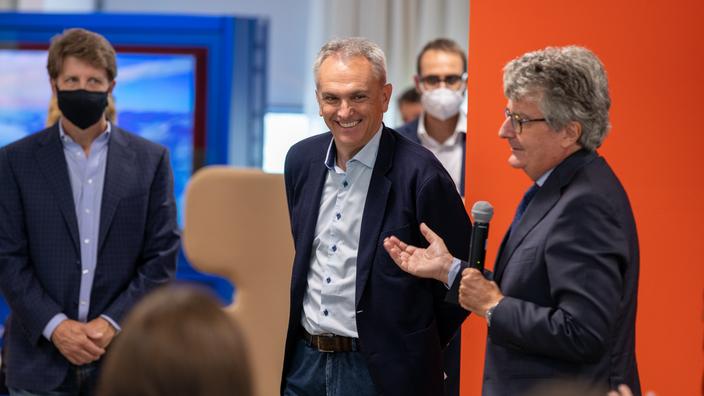 REPORT – The iPhone maker is extending its partnership with the university until at least 2025 to train developers.

Behind the facade of the Federico II University of Naples are hidden classrooms like no other, those of the Apple Developper Academy. On this floor, the tables are shaped like starfish, the boards are large touch screens, and the 360 ​​students in the class have a Mac and an iPhone. They are there to learn how to code, develop, manage applications and “open up to others». «Open-mindedness“Is one of the mantras of Luca Maestri, vice president and chief financial officer of Apple, who came straight from San Francisco to celebrate the extension of his partnership with the institution, until 2025” at least “.

The program was created in 2016, “to respond to a request from the Italian government”, which then wanted greater support from Apple. It will be a code training, to learn to master the intricacies of iOS, Apple’s operating system. “We had the idea of ​​creating a learning hub, not in a city like Milan where the offer is already rich, but here, in Naples, with the ambition to attract other companies.», Explains Luca Maestri, who recalls that the training program started in Brazil, to spread around the world. The European anchor point is therefore Neapolitan. And it works. “Students wishing to enter the job market directly have on average two to three job offers, in Italy or abroad.», Adds Luca Maestri. «Apple does not intend to replace university training, but to complete an offer, to bring these students to achieve their dreams. And keep in mind that 70% of them will have a job that does not currently exist».

«People want to come to ItalyLuca Maestri jokes that other companies such as Cisco, Accenture and Telecom Italia have already come to enrich the local education offer. «The university course is very theoretical, the program developed with Apple, allows students to have a much more practical approach. The two are obviously complementary», Explains the rector of Federico II University, Giorgio Ventre.

If the pandemic prevented the 2020 session from taking place, the 360 ​​students who came to return to school this week come from very diverse backgrounds. Parity is not yet in place, but nearly 40% of women have entered the training this year. Twenty nationalities are represented, including Americans, with very different profiles. From the 20-year-old student who takes a gap year in his education to attend this nine-month training course, to the seasoned employee in full retraining.

From Simplon to Naples

At 58, Yves already has a whole career behind him. The dean of the 2022 class is determined to turn his back on his old life. He intends to add to his technical skills in the field of medical devices the mastery of software. Next to him, Willie, just 21, is a Frenchman from Miami. He dreams of a future as a developer made up of “high wages“. While Bernard, 40, wants a job that allows him “to work when he wants, how he wants, from where he wants“. Beside him, Mikail and Aristide, 20 and 24, salute the quality of the infrastructures, determined to seize the opportunity that is offered to them. These French people have one thing in common, before joining the Neapolitan training, they followed a first in France, with the Simplon foundation, also supported by Apple. A step that allowed them to qualify hands down for this new nine-month training course. The only downside is the accommodation. The French students all struggled to find, and opted for very temporary solutions.