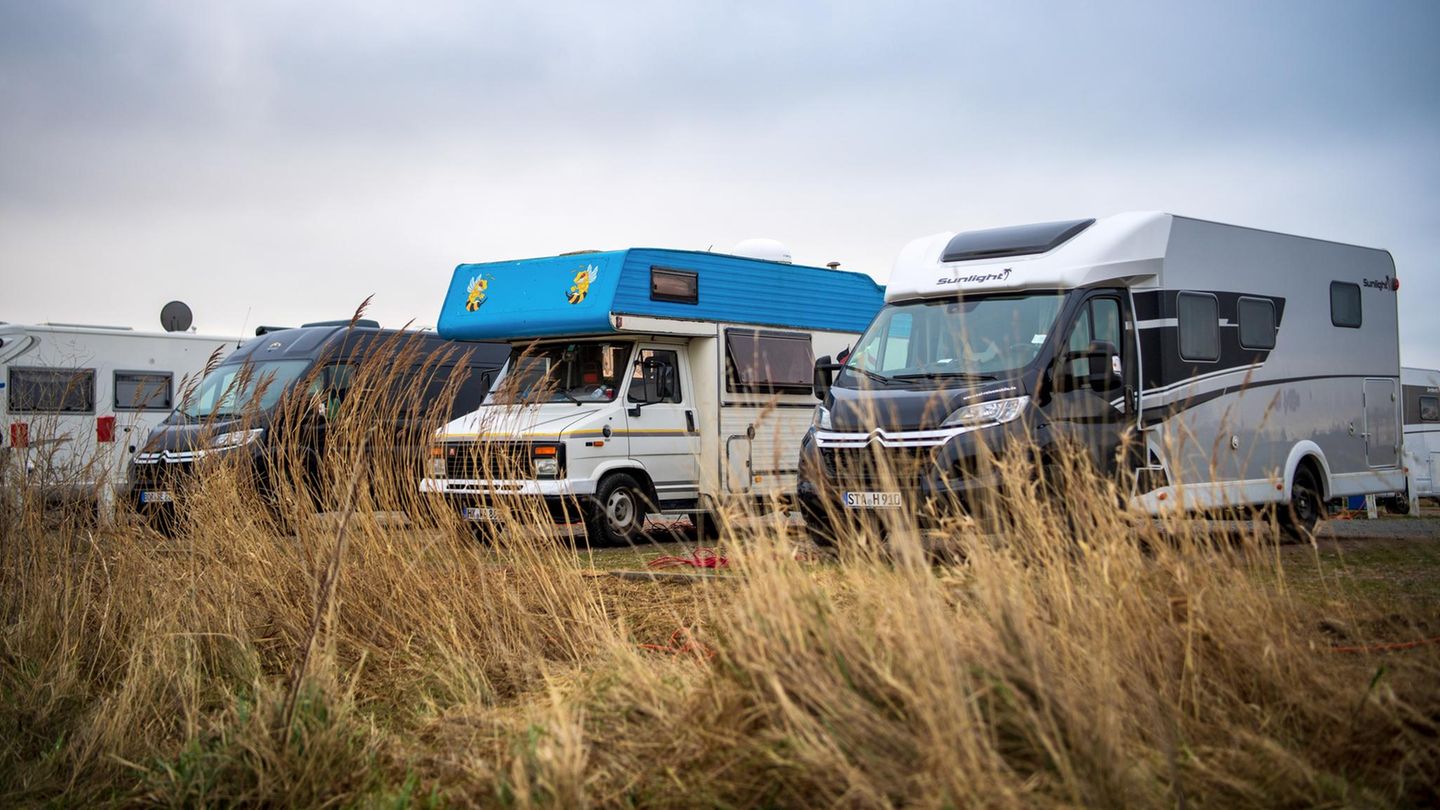 In snow flurries in the Alps or in storm surges on the coast: despite the adverse weather, more and more people are venturing out on camping holidays, even in winter. Has the corona pandemic further fueled the trend towards camping?

Peter Ziemann looks with a little pride at the wooden beams that are supposed to protect his awning from collapsing in 30 to 40 centimeters of fresh snow. “But the most important thing is the floor so that the cold doesn’t come up from below,” says the 67-year-old. “At night it sometimes has temperatures of minus 13 or 14 degrees, you’ll notice that.”

His wife Ingrid and he still spent 70 days with a caravan and awning at the campsite in the Allgäu in winter – and they want to come back. “I could never have imagined that,” says Ingrid Ziemann. But that changed with the corona pandemic.

They bought a caravan just in time – before the delivery times got longer and the prices got higher. And now they have found a second home here in Wertach in the Oberallgäu on the Grüntensee. “You’re pretty much alone at the time, you really still have freedom,” says Peter Ziemann. Cross-country ski run and ski lift are only a few meters away – “ideal”.

Wolfgang and Angelika Knoke think winter camping is worthwhile even without snow. From her mobile home, parked just a few meters from the water’s edge in the port of Neuharlingersiel, you can get a glimpse of the North Sea island of Spiekeroog in the haze. The thermometer shows four degrees – wintry conditions for East Friesland.

Ingrid Ziemann sits next to her husband Peter in the caravan at a campsite on Lake Grünten.

The gas bottle on board supplies the heating for several days. Absolutely enough, says Wolfgang Knoke. One or two repairs are necessary in their mobile home with 240,000 kilometers under their belt. But that’s not a problem, says Knoke. “I can fix most things myself.”

Winter camping was already in vogue before the corona pandemic, according to the Federal Camping Industry Association. According to the Federal Statistical Office, around 50 percent more camping overnight stays were reported in February 2020 than ten years earlier. In a survey by the association, many winter campers cited the peace and quiet compared to summer and the opportunity to experience nature in winter as motivation.

Due to Corona, camping as a form of vacation has experienced a major upswing. However, it is questionable whether winter camping will become a long-term trend and whether the market for it will be really big, says Christian Mayer, professor at the Faculty of Tourism Management at Kempten University. “It’s an interesting niche, but a long way from summer business.”

On the one hand, some of the advantages of camping holidays don’t really come into their own in winter, says Mayer. “I often have to stay in a confined space, which can be a challenge for families. There is also often a lack of space on pitches to dry damp clothes.”

On the other hand, not all campsites are fully designed for this, says Mayer. “For the operator, this is an effort that should not be underestimated – for snow removal, heating of the sanitary facilities and in terms of personnel.” This could be worthwhile for places with good connections to winter activities. “However, many family businesses also use the break for repairs or to recover from the summer season,” says Mayer.

“Many vacationers like the stimulating climate on the North Sea”

Brigitte Seefelder has opened her campsite in Wertach in the Allgäu anyway – even though she recently had to buy a new tractor in order to be able to free snow-covered mobile homes, as she says. Seasonal places for the winter, such as those booked by the Ziemann couple, are “very much in demand. It was unbelievable what was going on over Christmas.”

In Austria, too, campsite owners have recognized the demand in winter and reacted. At the end of the 1980s, his father was one of the pioneers of winter camping, says Gerhard Purtscheller, who is the second generation to run his campsite in the Tyrolean Stubaital. “The summer campers stayed longer and said: Do something in winter, you have a glacier cable car.” The family then “winterized” the place.

Particularly family-friendly: These are the ten most beautiful campsites right by the sea

According to regional tourism associations, more and more campers have been vacationing on the North Sea in winter for a long time. “The trend is clearly there,” says Jonas Hinrichs from the tourism company Die Nordsee in Wilhelmshaven. “Many vacationers like the stimulating climate on the North Sea.” The development was strongly fueled by the corona pandemic.

The fact that there are more and more campers on the road in winter is also related to the availability of parking spaces in the region, says Wiebke Leverenz from Ostfriesland Tourismus GmbH in Leer. Some municipalities have noticed the interest of Bulli drivers and motor home owners in parking spaces and are now specifically creating space for this target group. Although the parking spaces are mainly used in summer, they are increasingly being used in winter as well.

Rita and Christian Wilkens and their daughter Jette have secured a top spot for their North Sea winter vacation – right in front of the Wadden Sea. The family accepts that storm surges can sometimes push the waves dangerously close to the campers. Just last night, a storm shook the motorhome properly, says Christian Wilkens. But everything remained intact. “And otherwise you just set back a few meters.”

Flexibility in bad weather is an advantage of winter camping, says Peter Ziemann in his awning in the Allgäu. “It’s been a dream for the last two weeks, now it’s changing again.” Therefore, the couple wants to make their way back soon – to their place of residence near Heilbronn in Baden-Württemberg. The return to the caravan in the Allgäu is already planned.

Face-to-face classes 2022: official calendar of the new School Year and when will they start in Peru | minedu | Society