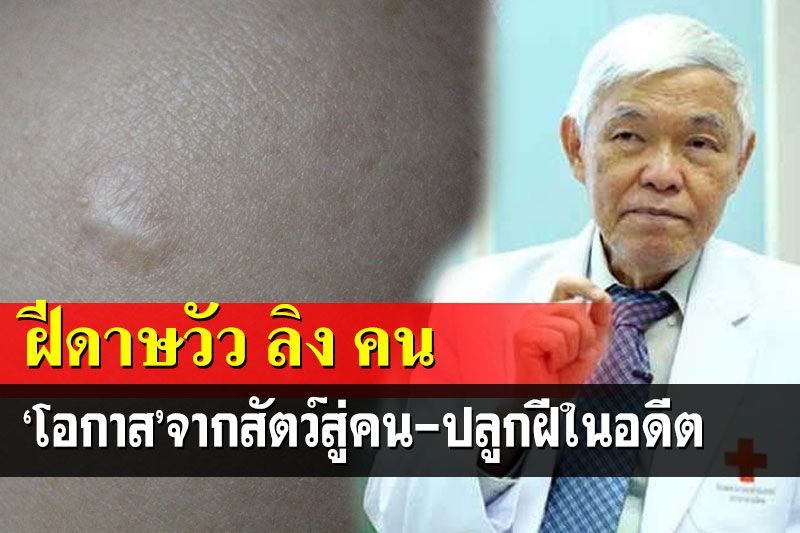 ‘Mor Yong’ Lectures, cowpox, monkeys, people’ opportunity to cross from animal to human – vaccination in the past

May 22, 2022 Prof. Dr. Yong Phuworawan, Head of the Center specializes in virology. Clinic, Department of Pediatrics Faculty of Medicine Chulalongkorn University Facebook post Yong Poovorawan titled “Chickenpox, Vaccination Against Smallpox in the Past” with the following content…

“Chickenpox, an inoculation against smallpox in the past.

repeat invoking smallpox In honor of Professor Dr. Prasert Thongcharoen, who has been calling this name for more than 10 years.

Poxvirus family of smallpox viruses causes disease in both humans. and in many animals such as cows, monkeys, birds and chickens

Viruses found in animals may cross to humans, such as cowpox, monkeypox, and human smallpox. If it occurs in humans, it is most severe. and very easy to contact person to person But when crossing the smallpox virus into humans, transmission is more difficult. must be in close contact And the severity of the disease is much less than smallpox.

Smallpox can cross over to humans. For example, a milking woman cowpox infected In the days of Dr. Edward Jenner, more than 200 years ago, Dr. Jenner found that a milk woman infected with cow pox Then when the outbreak of smallpox people This milking woman did not contract smallpox. Therefore, it is the origin of the cow smallpox infection. To be planted for people and can prevent smallpox of people. by people infected with cow smallpox It was just a small pustules. and disappeared with the scar

Chicken pox is a different virus. Not related at all

The viruses in the smallpox, bovine, and human smallpox are very similar. Therefore, vaccination prevents cow smallpox. can prevent smallpox It was also found to be protective against smallpox as well.

Thailand, but instilling abscesses for everyone especially from birth And this disease can be controlled and gone. So vaccination in Thailand was stopped around 1974 and the World Health Organization announced that smallpox was gone in 1980 and the world has stopped vaccination since then.

Almost all Thai population born before 1974 had vaccination. or observed from the scarring of the abscess a flat scar But we still have the BCG vaccination against tuberculosis. The scar of the TB vaccine is more convex, as shown in the figure. The upper scar is from the TB vaccine. The lower scar is from the smallpox vaccine (Figure 1); Fig. 2 is tuberculosis; Fig. 3 is smallpox vaccine scar.

Kuming, a YouTuber battling ovarian cancer, says his final goodbye “See you in my next life”