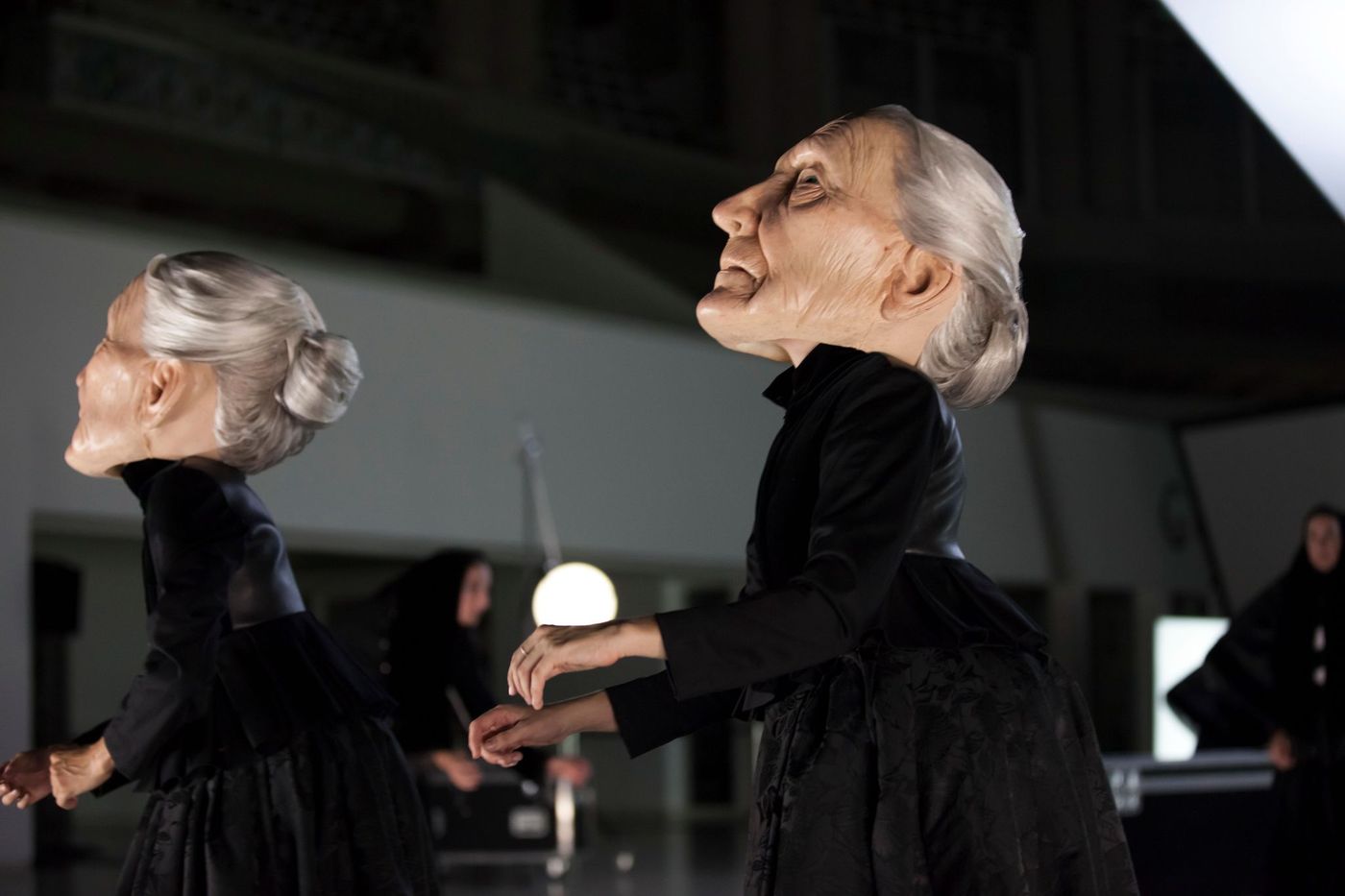 They arrive like figurines escaped from a music box. The eight dancers, caps on their heads and feet concealed by the motionless corolla of their skirts, seem to glide over the stage. These evanescent creatures, at the crossroads of folklore and surrealist imagination, populate Sonoma (1), created in Barcelona in 2020 by Marcos Morau and presented at the end of the festival in the grandiose setting of the main courtyard of the Palais des Papes.

The title of the piece is a neologism formed by the choreographer, mixing Greek roots (soma, body) and Latin (sonum, the sound). A whole program for Marcos Morau who seeks through creation to make heard the cry of the captive human with a rhythm precipitated to the extreme, to the point of absurdity.

As Luis Bunuel did before him, whom he claims here as a reference, he draws from tradition and spirituality the protean material of a possible liberation. The body language, if it is anchored at the root of folk dances, traverses the field of a contemporary writing with the destructuring mixed with cubist reflections. Marked by very precise work on the joints of the arms, the dance breaks classic lines and unfolds in a particularly graphic sketch, where the angle of the wrists responds to the square drawn by the cardigan worn by women.

However, Marcos Morau’s writing does not seek harmony or virtuosity but rather a form of liberation at the crossroads of disciplines. Moving choir, the dancers sing out a few sentences, inspired by Beatitudes then Ten commandments : “Blessed are the missing because wherever you are, there will be someone looking for you” or “You will not live with your eyes closed”.

The power of images

Neither these words, announced without real force, nor the dance, inventive without being surprising, are enough for the brilliance of the play. Yes, in Sonoma, Marcos Morau does seduce, it is not so much by its choreography as by its talent to create persistent images: the young women surrounding with their care an enormous roped cross, the same group blinded by the peasant scarves tied on the heads or later, in white this time, the faces adorned with traditional flower wreaths and finally, the dancers, facing the audience, armed with large drums.

We also let ourselves be charmed by the poetic visions of these two old women – large papier-mâché heads, of a touching simplicity -, of an elegant feminine silhouette that seems to fly just above the ground, or of this giant headless, in gala costume, lost on the set. Declining a black and white palette, Silvia Delagneau’s costumes constitute one of the cornerstones of the visual delight offered by the piece: the impeccable cuts are landscapes in themselves.

→ SELECTION. Festival d’Avignon: “Moon Cabaret”, “l’Élected”, “Normalito”… Our favorites from the Off

From time to time, the outfits deploy their own effects: like these incredible white dresses which by magic turns change their appearance to take the appearance of overturned cups. The music composed by Juan Cristobal Saavedra skilfully mixes Spanish folk influences and more contemporary tempos, in the hollow of which nestles, elegant comma, a quote from the Prelude to the Afternoon of a Faun, by Debussy.

The fragile dance under the high walls

Marcos Morau belongs to the very privileged circle of artists invited to perform in the prestigious Cour d’honneur, emblematic of the festival. An appointment for which the choreographer does not totally convince. His piece does not venture beyond the center of the large plateau, framed by unsightly, and unhelpful, white panels. As for the choreography, fairly collected on itself with many movements on the ground, one can wonder if the weak lighting which accompanies it is enough to carry it to the last heights of the tier.

→ CRITICAL. Avignon Festival 2021: Fabrice Murgia and Laurent Gaudé at the end of the night

Marcos Morau nevertheless tries to appropriate the place, by making a few attempts. Some unsuccessful, like the intermittent illumination of a few openings. Others more successful: a fire that virtually takes in a window or the shadows of the dancers fleetingly projected, immense on the high walls. There, the Avignon public knows it well, waltzing countless ghosts.

The piece for 17 dancers begins with a brilliant dissection of gestures with a thousand stories – the alienation of the being in a productivist society, intolerance, the environmental crisis – until a beautiful resistance march. Then the choreographer gets trapped in a deadly rehearsal, supported by heady music, making the dancers and the audience suffer exactly what he denounces. The process turns out to be so cumbersome that it takes away all credit.