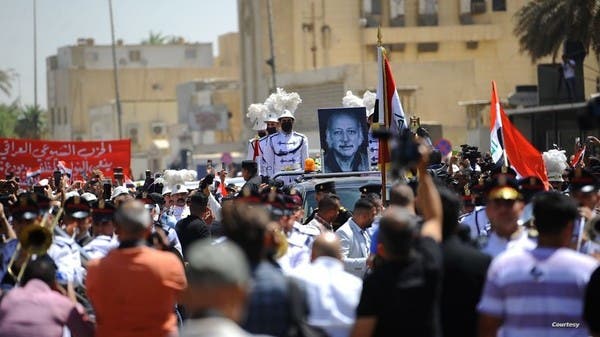 Iraqis bid farewell, Saturday, in Baghdad The great Iraqi poet and revolutionary icon Muzaffar Al-NawabWith an official and popular funeral, it reflected the revolutionary and militant history of the poet, who was known for his opposition to Arab regimes and his sharp criticism.

In preparation for his burial in Najaf, in honor of his will to be buried near his mother, the body of the poet, who died at the age of 88 in the UAE, was transported by presidential plane to Baghdad International Airport earlier.

There, official ceremonies were held for him, in the presence of Prime Minister Mustafa Al-Kazemi. The guard of honor carried the coffin of the deputies, which was decorated with flowers, while one of them held a black and white picture of him.

Then he was taken in an official procession to the headquarters of the Iraqi Writers Union, where hundreds of people of different generations, women and men, gathered to participate in the last farewell to the deputies.

On the outskirts of the road leading to the union, hundreds of people clad in the Iraqi flag gathered to express their Their grief over the loss of this Iraqi symbol. The coffin was carried by 6 members of the guard of honor when it was entered into the courtyard of the Union, where it was met with cheers, repetition of verses from his poems, and the chant of women.

However, the family hardly had time to gather around the coffin in the courtyard, while the Prime Minister, surrounded by his bodyguards, was able to quickly approach him before leaving.

From the funeral ceremony in the presence of Al-Kazemi

The ceremony was shortened after some young people began chanting slogans against Al-Kazemi and against the authority, in an atmosphere reminiscent of the anti-authority protests two years ago.

Some of the participants raised Iraqi flags, and others carried pictures of deputies, while supporters of the Communist Party carried a large red flag.

Before the coffin arrived at the headquarters, Omar Al-Saray, a spokesman for the Writers’ Union, said that “this great reception does not mean only writers, but also citizens, as he is a popular poet and not an elite poet.”

On the other hand, part of the participants expressed their dissatisfaction with the protests that took place during the funeral, and considered that they were offensive to the event.

Al-Nawab was born in Baghdad on January 1, 1934, and graduated from the Faculty of Arts at its university. With his revolutionary poems after years in prison and exile The author of my two poems, “Jerusalem, the bride of your Arabism” and “Tops”, signed it. The first poem that he highlighted in the world of poetry was “A Reading in the Notebook of Rain” in 1969.

The first full Arabic edition of his work was published in 1996 by Qanbar House in London. The most prominent of his collections of folk poetry is “Al-Rail and Hamad”, while his last verse on the bed of his illness was “I am tired of me and I can’t bear my pregnancy.”

The deputies spent most of his years outside Baghdad, but he remained present in the conscience of the Iraqis who bid him farewell by circulating his pictures and poems on social media since the news of his death was announced.

In 1963, the poet, who was a communist, was forced to leave Iraq, due to political circumstances and the struggle between communists and nationalists. He fled to Iran via Basra, before the Iranian authorities handed him over to the Iraqi political security at the time, according to a profile of him published by the “Adab” website, which specializes in Arabic poetry.

The deputies were then sentenced to death, but his sentence was commuted to life imprisonment, and he ended up in a prison in Hilla in central Iraq. He then escaped from prison, but was arrested again years later.

After his release, he left Baghdad for Beirut and then Damascus, and moved between Arab and European capitals, before falling ill and dying in the Emirates, where he was receiving treatment. He never married and had no children.

The first return of the poet, who was exiled under Saddam Hussein’s regime, to Iraq was in 2011, coinciding with the US withdrawal following the invasion in 2003, as he refused to return to his country under the “occupation”.

While he emerged as a poet, Al-Nawab was also a plastic artist, and “one of the most beautiful Iraqi lyrical voices”, according to the poet and writer Abdul-Hussein Al-Hindawi, adding that “he was basically a lyric poet… he gave the Iraqi vernacular an additional aesthetic dimension.”

Although he is from a previous generation, his poems spread widely during the unprecedented popular uprising that shook Iraq in October 2019, and were transmitted by young people as an expression of their rejection of political reality and their hope for change.

From the Union of Writers, 27-year-old photographer and participant in the funeral, Muhammad Hisham, said, “Muzaffar set for us a path and a vision for my generation and the generations that will soften me… Muzaffar al-Nawab is part of the things that contributed to awakening our political and social awareness and awareness of our right.”

Russian bombing of Donbass .. and the destruction of a “large” shipment of Western weapons to Ukraine

These celebrities don’t believe in God