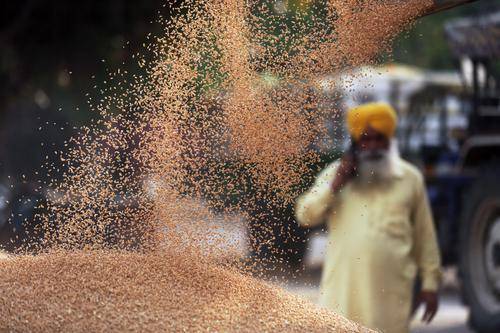 On May 14, local time, the G7 agriculture ministers condemned India’s decision to temporarily ban wheat exports. The day before, India issued a temporary ban on wheat exports, claiming that the sharp rise in international food prices caused by the Russian-Ukrainian military conflict has threatened the food security of India and neighboring countries.

The country takes the people as the sky, and the people take food as the sky. Therefore, food security has become an important part of national security, and even a core issue. But in this eventful summer, food security has become a global issue. This security is not only reflected in the overall tightening of food supply, but also in the unbalanced supply of food types, especially the large-scale shortage of wheat supply.

Due to dietary habits and trade structure, different types of food cannot be replaced at any time, anywhere, and at will. This leads to a shortage of supply of a specific crop that will exacerbate the food crisis. As a traditional grain exporter, India suddenly announced a ban on wheat exports, which will not only further aggravate the seriousness of global food security, but also have a significant and far-reaching impact on international relations and regional situations.

There are three main reasons why the world will face food shortages: climate change, the Russian-Ukrainian conflict and supply chain disruptions caused by the COVID-19 pandemic.

In terms of climate impact, the North American savannah and the South American pampas, the most important food-producing regions in the world, are experiencing unprecedented drought. Argentina’s soybean production is expected to fall by about 15 million tonnes due to the drought in 2021-2022, the Buenos Aires Grain Exchange said. CNN reported that since October last year, Kansas, the largest wheat-producing state in the United States, has had no rain or snow, and the wheat harvest is expected to be poor.

According to the National Drought Mitigation Center (NDMC), more than half of Kansas’ land is classified as a Category 3 “Severe Drought” or worse out of a Category 5 drought. In addition, three-quarters of Oklahoma’s wheat fields and more than two-thirds of Texas’ farmland are in severe drought.

At the same time, the military conflict has massively diminished the role of Ukraine and Russia as “Europe’s breadbasket”. In 2020, Russia and Ukraine were the world’s largest and fifth largest wheat exporters in terms of export value. According to Ukraine’s Ministry of Agriculture, 85% of the country’s crop exports depend on sea routes from the Sea of ​​Azov and the Black Sea. Because of the military conflict, a large amount of wheat was stranded at the port and could not be shipped. The Ukrainian Ministry of Agriculture pointed out that land transport can only meet 25% to 30% of freight demand, and because Ukraine’s railways are different from EU specifications, the cost of changing trains at the border increases the export price of crops by another 10% to 15%.

Russian crops, which also need to use the Black Sea trade route, not only face the same problems as Ukraine, but also have been kicked out of the international grain market because of financial sanctions from the United States and Western countries. In fact, the Russian government has also announced self-imposed restrictions on food exports in response to sanctions and to protect the domestic food market.

If the military conflict continues, global food supplies will continue to decline. On the one hand, more young and middle-aged people have been called up to the army, resulting in a shortage of agricultural labor in Ukraine. On the other hand, Russia and Belarus are the world’s largest and sixth largest fertilizer exporters respectively, and the military conflict has also caused a shortage of fertilizers in Ukraine and even many countries around the world. The fuel required for farming machinery is also seriously insufficient.

The USDA forecasts total global wheat production in 2022-2023 at 774.8 million tons, the first decline since 2018-2019. Global buffer stocks are forecast at 267 million tonnes, falling for the second year in a row to the lowest level in six years. The global food crisis this year and next is imminent.

▲ On May 7, 2022, a farmer sows seeds in a field in Homagmer, Sri Lanka.Photo/Xinhua News Agency

Grain is a rigid demand for human life, and slight fluctuations on the supply side may lead to drastic price fluctuations on the consumer side. In March 2022, the price of wheat futures on the Chicago Board of Trade (CBOT) has reached a record high since 2008, reaching $13.63 per bushel.

David Beasley, Director-General of the United Nations World Food Programme (WFP), said, “Due to the new crown epidemic, the number of hungry people around the world has increased by 18%, and the conflict in Ukraine may cause 7.6 million to 13.1 million people to suffer from hunger and fall into A state of disaster beyond disaster.” Reuters reported that “346 million people, more than a quarter of the total population of the African continent, face severe food insecurity.”

Shortage of food and rising food prices will undoubtedly lead to political crises and social unrest in many poor and backward countries and regions. For example, Lebanon, which has been in economic crisis for many years, imports 80% of its wheat from Ukraine and 15% from Russia. Today, the Lebanese government, which has been subsidizing food imports, can no longer afford rising wheat prices and is on the verge of financial bankruptcy.

Egypt is also facing a similar financial crisis. Subsidizing bread has been fundamental to Egypt’s political stability, and its fiscal spending accounts for a staggering 1 percent of the country’s GDP. In Sri Lanka, which is currently in the worst economic crisis since 1948, if the food problem cannot be solved, large-scale violence and political turmoil will inevitably intensify.

From a global perspective, if more and more governments cannot afford the fiscal expenditures brought about by rising food prices, social unrest and revolutions like the “Arab Spring” in 2011 are likely to appear in more countries.

▲ On April 8, 2022, customers shop at a market in Budapest, Hungary.Photo/Xinhua News Agency

Judging from the data, India has large-scale rice and wheat storage, with a total of 74 million tons, of which 21 million tons are used for strategic reserves and public distribution systems, providing cheap food for more than 700 million poor people in the country. In theory, India has the capacity to export 22 million tonnes of rice and 16 million tonnes of wheat this fiscal year, said Gulati, an agriculture professor at the International Economic Relations Research Council of India.

After the outbreak of the Russian-Ukrainian military conflict, India’s wheat exports began to increase significantly due to price stimulation. However, persistent drought, fertilizer shortages and rising energy prices since March are undermining the Indian government’s confidence in its future food self-sufficiency. It is also in this context that the Indian government announced a ban on wheat exports, giving priority to ensuring domestic demand.

At the same time, the use of food as a geopolitical tool is also being considered by the Indian government. In an official notice issued by the Directorate General of Foreign Trade (DGFT) on the evening of May 13, the “Government of India is committed to meeting the food security needs of India, neighboring countries and other vulnerable developing countries”, with the approval of the central government of India. , which can export a portion of wheat at the request of other governments.

Earlier, Indian Prime Minister Narendra Modi also told U.S. President Biden that if the World Trade Organization allows, India can be “ready to provide the world with stockpiled food from tomorrow.” Therefore, the current ban on the export of wheat instead of rice can also be regarded as an important tool for India to politicize grain exports, trying to use cheap food to pave its way to the center of international political power.

In fact, as the food crisis intensifies, many countries are tightening their food export policies. This will undoubtedly further tighten the elasticity of the global food supply and even cause humanitarian disasters in some countries and regions. And this will certainly give countries capable of exporting food more international discourse power.

To put it simply, there are currently only about 33 countries in the world that can achieve food self-sufficiency, that is, most countries rely on imports of food. According to the 2022 Global Food Crisis Report released by the Food and Agriculture Organization of the United Nations, about 193 million people in 53 countries or regions will experience a food crisis or further deterioration of food insecurity in 2021, a record high.

In the future, food may become a strategic commodity with the same geopolitical significance as oil. In the future international political landscape, grain exporting countries may occupy a more dominant position. These countries include both the traditional hegemony the United States and the emerging country India. In this small grain, the national will is hidden in this way. In this regard, China can not but arouse vigilance and attention.

Giro: the impressive fall of Eritrean Natnael Tesfatsion in a col descent (VIDEO)

The chairman of ASEAN bodybuilding is pleased with the athlete’s development. ‘Ekaphon-Apichai’ continues to win the Asian Championship and the World Championship.