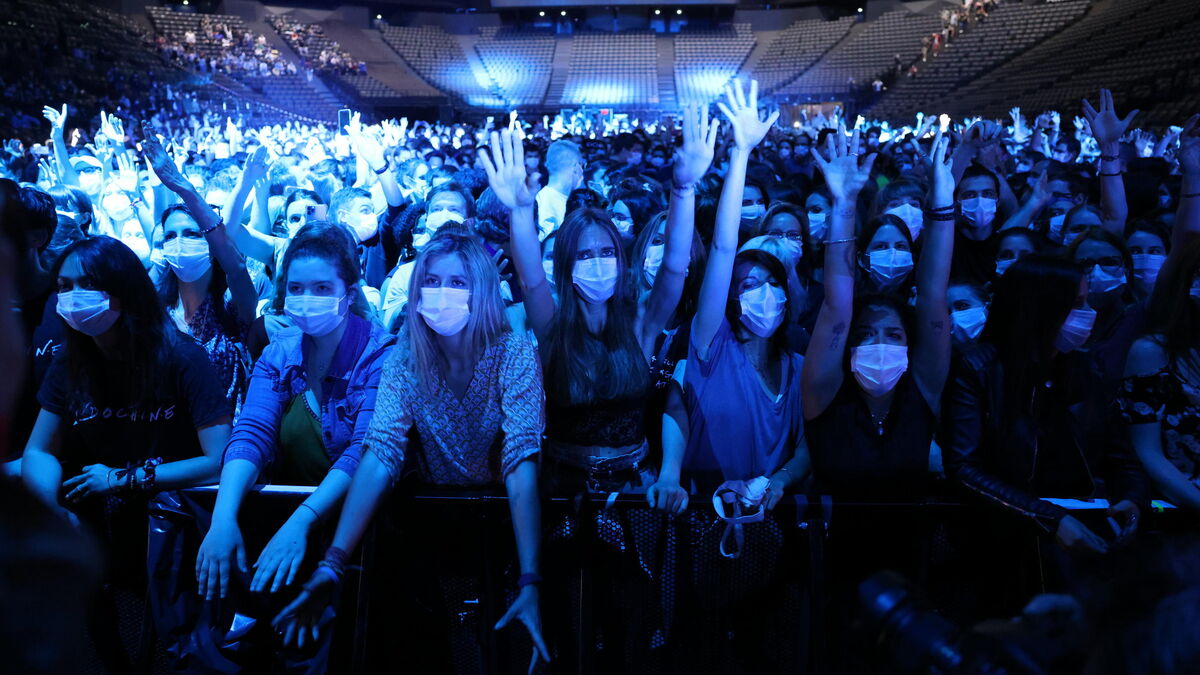 Thousands of heads are jumping in unison, the same white rectangle on the nose. Suddenly, while the DJ Étienne de Crécy, who provided the first part d’Indochine, leaves the stage, a voice, up there, in a screen, sounds like a reminder: “Keep your masks, good concert”.

5,000 spectators have been clapping their hands for an hour in the AccorHotels Arena, the huge Parisian venue in Bercy, which has regained its clamor this Saturday afternoon. And everyone is playing the game, well aware of participating in a scientific study, essential for the resumption of concerts. “We promise to be disciplined, it’s an experiment”, repeats, in a serious tone, Aude, 18, born at the same time as the Indochina hit, “I asked the moon”.

Renewed ventilation, no bar, no beer in the assembly and cameras that will tell if the mask was worn well… Before this great event, all were tested, several days in advance, in the pit transformed into a giant lab . Then everyone “spat into a tube, it was funny”, laughs Erell, 22, who, like the other participants, handed in his saliva self-sampling this Saturday at the entrance to Bercy. She will do a second one within a week.

But on the 7,500 candidates, aged 18 to 45, with no comorbidities, 2,500 were unhappy in the draw and asked to stay home. Their screening, they will send it by post. Thus, researchers from the Assistance publique-Hôpitaux de Paris will be able to compare, in the two groups, the number of contaminations, seven days after the event. “It makes me a little drunk for being a guinea pig,” protests Elias, 22, a bit provocative.

The tests will be analyzed in record time

But is the count good? Did all the selected ones come this Saturday? And how many were deprived of concert, after having tested positive? “We will not give any figure, warns, behind the scenes, Constance Delaugerre, professor of virology at the Paris Saint-Louis hospital. All the tests will be analyzed in record time and we will see what happened. To find out, see you at the end of June ”. Next to her, the Minister of Health, Olivier Véran, appears, relaxed in a shirt. “Seeing 5,000 people dancing standing in a pit is one of the scenes that we have lost track of for over a year,” he says, evoking “collective relief”.

Afraid of being contaminated? Rock fans don’t even think about it. “You don’t know the Indochina audience? Nothing can demotivate them, they are surprising ”, laughs JB”. Aurélia, 40, abounds: “Music is life”. On stage, Nicola Sirkis, cellphones pointed at him, connects the hits. The baffles resonate in the breasts. Benjamin, 38, hopes wholeheartedly “that it will not be the last concert”. We are talking about a new variant discovered in Vietnam, that worries him. “Maybe if the epidemic starts again, the concerts will not resume. Provided that this is not the case! “.