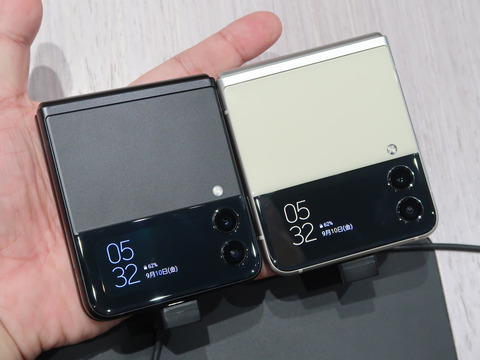 Among the latest models of foldable smartphones (smartphones) equipped with Samsung Electronics’ foldable display, the vertically folded “vertical fold” that can be carried compactly in the closed state.Galaxy Z Flip3 5G“Is characterized by the shape of a general large-screen smartphone folded in half.

A horizontally-opening foldable smartphone that can be used on a large tablet-sized screen when opened on the other side.Galaxy Z Fold3 5GIt is waterproof and compatible with Osaifu-Keitai (FeliCa), and has been sold by NTT DoCoMo and au since early October, and advance reservations have already been accepted for each model.

In this article, I had the opportunity to touch the actual machine of the vertically folded Galaxy Z Flip3 5G, so I will introduce its features with photos. The official web store “

In addition, in commemoration of the release of Galaxy Z Flip3 5G, Samsung Electronics Japan will purchase and apply for a completely wireless earphone “Galaxy Buds Pro (model number: SM-R190)” (Phantom White) and “microSD card reader”. Reservation / purchase campaign to give as a gift ( https://www.galaxymobile.jp/2021z-fold3-z-flip3/ ) Is carried out. 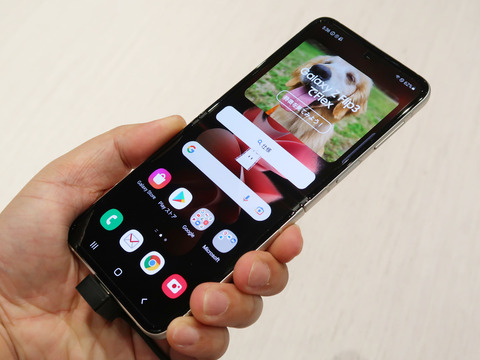 The feature of Galaxy Z Flip3 5G is that you can fold a vertically long smartphone in half and store it compactly. It also has a sub-display that allows you to check simple information even when it is closed, and although it has a different structure, it reminds you of the old two-fold mobile phone. There are two colors, cream and phantom black.

The main display is equipped with a smartphone-like large screen of about 6.7 inch FHD + (1080 x 2640 dots) organic EL, and the sub display when folded is equipped with about 1.9 inch 260 x 512 dot organic EL. In addition to achieving IPX8 waterproof performance, the main unit also supports a smooth refresh rate of 120Hz. 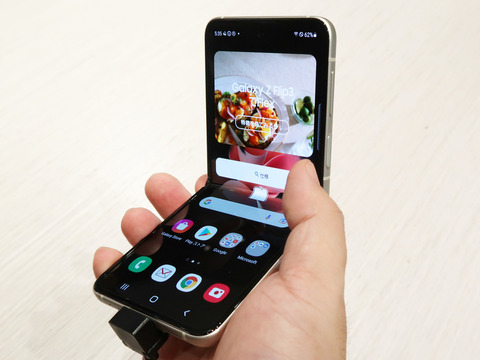 The hinge part is folded in half, but it is designed to stop at any angle like a laptop computer (PC). For this reason, if you try to open it with just your thumb while holding it in one hand, the limit is about 90 °. When you want to open it completely, you need to open and close it with both hands. When fully opened, it can be used in the same way as a general large screen smartphone. 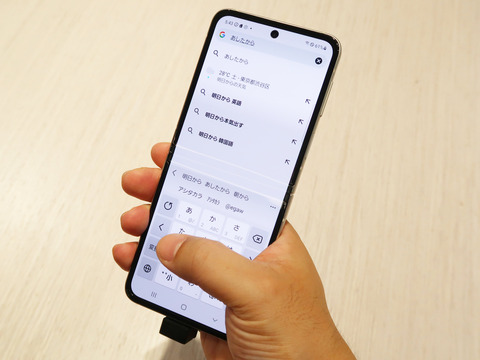 In addition, biometric authentication is equipped with a fingerprint authentication sensor integrated with the power key on the side, and it is arranged so that it can be operated naturally whether it is folded or opened. It also supports face recognition, but this is only used in the open state. 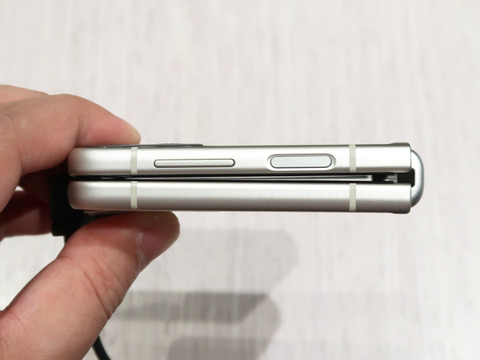 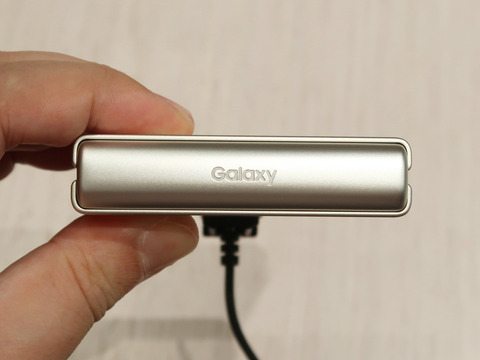 It weighs about 184g, which is almost the same as a smartphone equipped with Qualcomm’s “Snapdragon 888 5G Mobile Platform”, which is the same high-end chipset (SoC) as a large screen model. Considering that it can be folded in half, it can be said that it is rather light.

The sub display supports touch operation. In addition to changing the design of the clock, you can also operate widgets in other apps. It can also be used as a finder for selfies using a high-quality 12-megapixel out-camera. 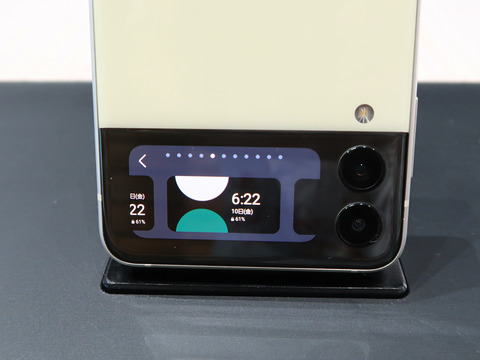 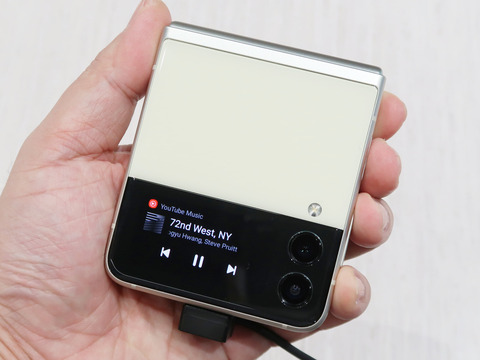 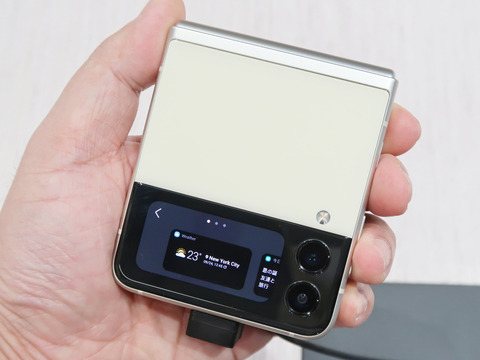 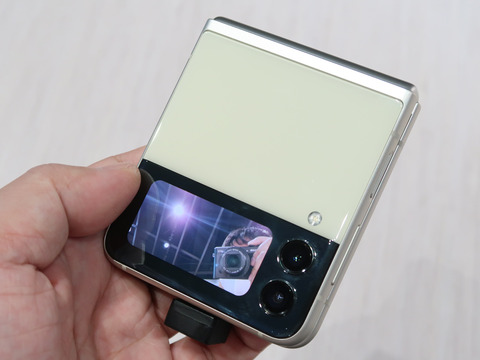 The camera is equipped with a wide-angle and ultra-wide-angle out-camera with approximately 12 million pixel CMOS on the outside. Furthermore, it is equipped with an in-camera of about 10 million pixels CMOS on the upper part of the main display inside, and in addition to taking selfies, it can also be used for taking pictures of yourself by placing the smartphone on the desk and opening it halfway like a video conference on a notebook PC. Easy to use. 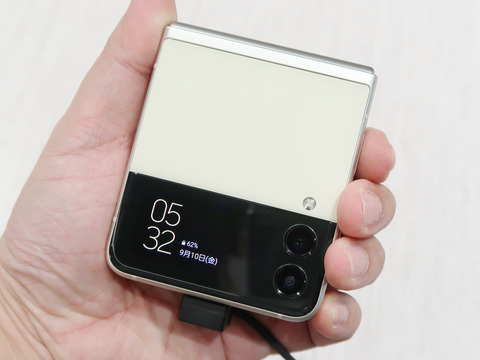 In addition, the camera app is designed to recognize the folded state and operate, and when opened, it functions like a general smartphone camera. On the other hand, in the half-opening, one is divided into the finder and the other is divided into the operation screen. Since it is half-open and can be placed on a desk, it is easy to enjoy timer shooting and movie shooting. 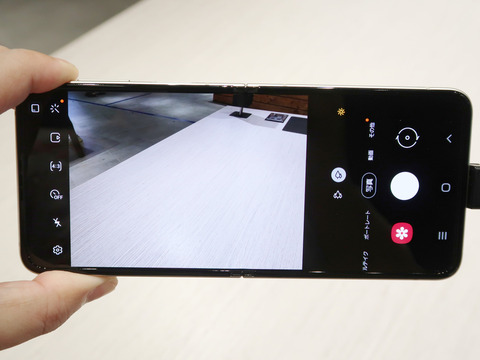 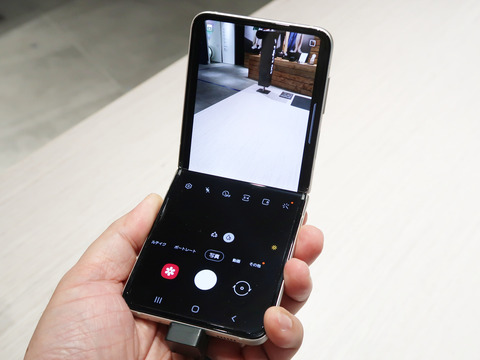 Products for the Japanese market are also compatible with Osaifu-Keitai, and the FeliCa antenna is mounted slightly in the lower right of the center of the bottom of the main unit, so you can touch it smoothly even when folded. The Osaifu-Keitai mark is quite thin and inconspicuous. In addition, it also supports wireless charging. 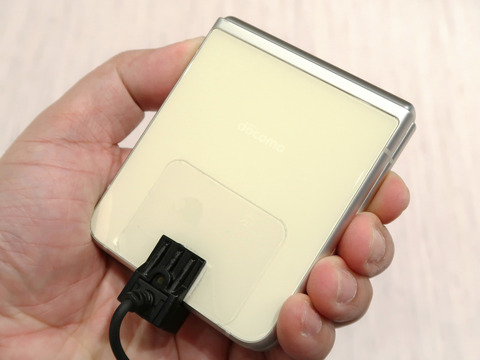 In the case of the NTT DoCoMo version, the home screen is also equipped with “docomo LIVE UX” unlike the Galaxy Z Fold3 5G. The two-screen display of the app is available as a standard Android function, and if you divide it in the middle, it will be easy to see even in the half-open state. 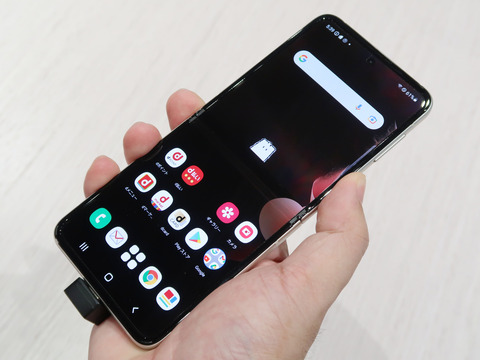 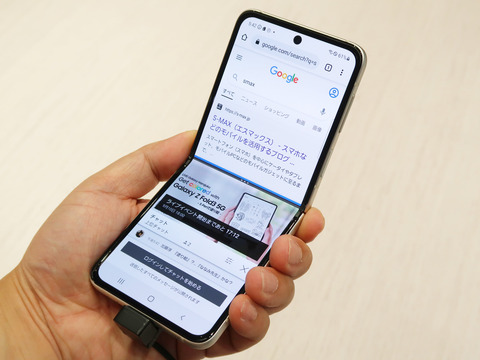 Until now, except for the Thome Brows model, it was sold only from au, but it will also be sold from NTT DoCoMo, and it is functionally waterproof and compatible with Osaifu-Keitai, so the folder bull smartphone is finally practical. Isn’t it becoming? For other detailed product information, please refer to the following articles.