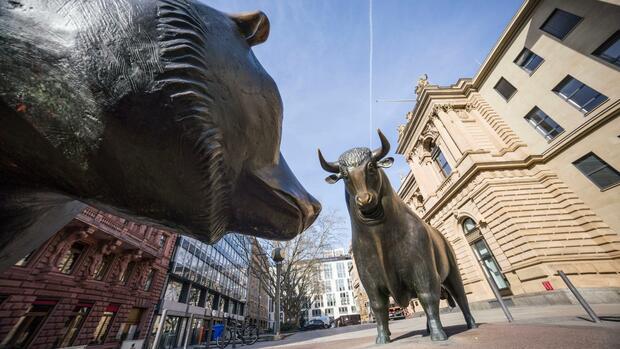 Frankfurt The US Federal Reserve took almost two years to discuss its new strategy. Her boss Jerome Powell presented her last Thursday. The key is a more flexible interpretation of the inflation target of two percent and greater tolerance if the labor market gets hot at some point.

Investors interpreted this as a signal that the Fed is maintaining its extremely loose monetary policy for longer than expected anyway. “With this, the Fed is moving towards a looser policy in the long term,” says Commerzbank-Economist Bernd Weidensteiner.

This was particularly evident on the dollar, which fell significantly on Friday. The euro is now trading just below the US $ 1.20 mark. In the past week it went for the Dax in tow of the record hunt on the US stock exchanges with a level of 13,033 points on Friday around two percent up.

On Wall Street, the euphoria was fueled by surprisingly strong US economic data, most recently on incoming orders. Technology stocks such as the electric car manufacturer’s shares were particularly in demand Tesla.

Many economists expect the US recovery to continue, albeit with somewhat weaker momentum. The US labor market, which was badly shaken by the corona crisis, had already made up ground in July, but not as many jobs were created as in the two previous months. Experts expect an average of 1.55 million jobs to be created outside of agriculture in August after 1.763 million most recently.

In Germany, too, economic optimism has recently prevailed. However, with the important difference that the number of new infections in the USA fell recently, while they rose again in the euro area – especially in France, Italy and Spain. “It remains to be seen whether the increasing number of infections will lead to appropriate countermeasures and whether this will slow down economic dynamism again,” says Helaba strategist Claudia Windt.

See Also:  Exclusive: Qatar delays partnerships for the expansion of natural gas due to the drop in prices

In the coming week, US monetary policy will once again be the focus on Monday when Fed Deputy Chairman Richard Clarida speaks. It could complement Powell’s statements and thereby also influence the markets.

Important new economic data will also appear. In the USA, the focus is on the ISM purchasing managers’ indices for industry on Tuesday and for services on Thursday. On the same days, the final corresponding indices from the London-based provider Markit for Europe and the USA are on the agenda.

In Germany, the Federal Statistical Office published a first estimate of inflation in August on Monday. A value of 0.1 percent is expected, which is also related to the special effect from the VAT cut. On Tuesday, the European statistical office, Eurostat, will publish the figures for the entire euro area.

At the end of the week, there is also data on incoming industrial orders. “Incoming orders in German industry are likely to have increased significantly again in July, and the core inflation rate in the euro zone is likely to have fallen noticeably in August,” expects Robert Greil, chief strategist at Merck Finck.

The election campaign in the USA, which is also dominated by the corona crisis, is also gaining momentum. “As certain as a second term of office of a US President Donald Trump was in the midst of a prosperous US economy at the beginning of the year, the outcome of the election is just as uncertain in times of a recession triggered by the pandemic,” says Eckhard Schulte, head of the Asset manager MainSky Asset Management. “For the stock exchanges, which are driven by an ultra-expansive monetary policy and trillion-dollar economic stimuli, the US election will not become a game changer.”

From the company side, only a few annual reports are arriving. After the Dax was kicked out of Wirecard will the German Stock Exchange announce their results of the regular index review of the Dax family on Thursday evening. Because of the insolvency of the payment service provider, the exchange operator had specially revised its rules and regulations so that bankrupt companies can now be removed from the selection indices with a period of two trading days. Originally, Wirecard would have remained in the first stock exchange league until the official September date.

The next wobbly candidate among index experts was the plastics manufacturer Covestro. However, the company has caught up, says Uwe Streich, index expert at LBBW. “Danger recognized, danger averted. If there are no strange surprises with constraints, stay in there. “

At the end of the month, the view across the Atlantic is directed towards Apple: The most valuable listed company in the world with a share price of around $ 500 is carrying out a one-to-four share split. This should make the papers of the iPhone manufacturer more affordable for small investors again. Due to the falling weight of the two trillion dollar company in the Dow Jones standard value index, an extensive restructuring of the index is necessary.