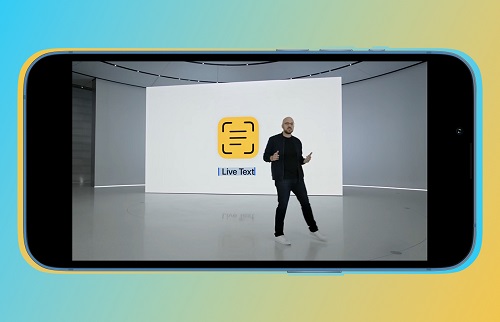 Apple introduced the Live Text feature to us for the first time with the iOS 15 update. This is an important feature that allows the system to recognize, select, copy, paste and translate texts in images. With the iOS 16 update, Apple has developed this feature more and more, as we will explain later.

Live text in the video

In the iOS 16 update, Apple added an important option for the Live Text feature via video support. You can play any video and then stop it at any moment and recognize the texts in the scene as if you were dealing with a still image, and then select the text you can copy and paste and search in the dictionary. To select any word, simply press and hold on it.

We note that the Live Text feature works on video and images in various system applications, whether images, camera, Safari browser, or any other applications.

When you select a word or text in an image or video, it will automatically show you a set of traditional options such as copying and pasting and searching in the dictionary, but you will find other new, smarter options such as currency exchange, tracking flights and shipments, and translation from foreign languages, it all depends on what you are doing by selecting it.

Now in the translation application in the system, when you press the camera button, you will find the live translation feature, where the system will recognize the texts and detect the language written in them, and then translate them in real time.

Apple has added new languages ​​to the Live Text feature, such as Japanese, Korean, and Ukrainian, in addition to the previously supported languages, which are English, French, Italian, Portuguese, German, and Spanish, and Arabic is still not available.

The Live Text feature will not be available on all iPhone phones that receive the iOS 16 update, but will only be found on iPhone phones operating with the A12 processor and later, i.e. iPhone XR, XS, XS Max and the second and third generation of iPhone SE in addition to the iPhone 11 and iPhone series phones 12, 13 and later.