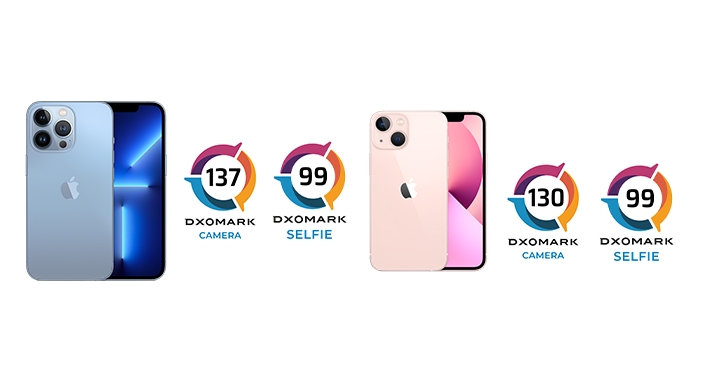 DxOMark’s test shows that the iPhone 13 Pro has fast and accurate focusing, smooth focus tracking and refocusing, accurate and consistent exposure, good color and white balance performance, and excellent skin tone rendering in most light and even backlight environments; In terms of film shooting, it also has accurate and stable exposure performance, wide dynamic range, good balance of details and noise, and the white balance between indoor and outdoor is quite accurate even in scene transitions.

However, the three sets of cameras have granular brightness noise when taking pictures. In extreme scenes, the dynamic range is insufficient, there are halos, slight edge distortion of objects, and the situation of broken steps. Telephoto shooting cannot capture enough details; video recording has Sometimes there will be pink color cast, white balance will occasionally be inconsistent, halo and ghosting will appear, especially in low-light recording, the details of indoor and portrait recording will be slightly lost, there is a slight jelly effect, and the picture will be sharpened. A bit inconsistent.

▲ The iPhone 13 Pro camera scored 137 points, squeezing into the fourth place in the rankings.

The self-portrait iPhone 13 Pro also scored 99 points. The camera has accurate face exposure. The deep depth of field allows the rear scene to be presented sharply. There are good details indoors and outdoors. The depth of field simulation is accurate, but there is brightness noise, especially the skin color. Indoors or occasionally inaccurate, slight distortion, low exposure when the fill light is turned on; the dynamic range of the video is wide, the exposure and white balance are accurate, but the noise is high, especially in low-light scenes, there will be a jelly effect when walking around. In addition, the details of low-light recording are also insufficient.

▲ In terms of selfies, the iPhone 13 Pro is only one point higher than the previous generation.

The iPhone 13 mini also advanced to the 10th in the ranking with a score of 130. The overall performance is similar to that of the 13 Pro Max. It also has accurate and consistent exposure and focus for photos and videos, good color and white balance, and good skin tone performance with backlight, and indoor and outdoor details. The presentation is excellent; however, there is also the problem of brightness noise. The dynamic range of extreme scenes is insufficient, there are halos, slight edge distortion of objects, and step-off conditions. The details of indoor and portrait recording are slightly lost, and there is a slight jelly effect. The sharpness of the picture is also a bit inconsistent.