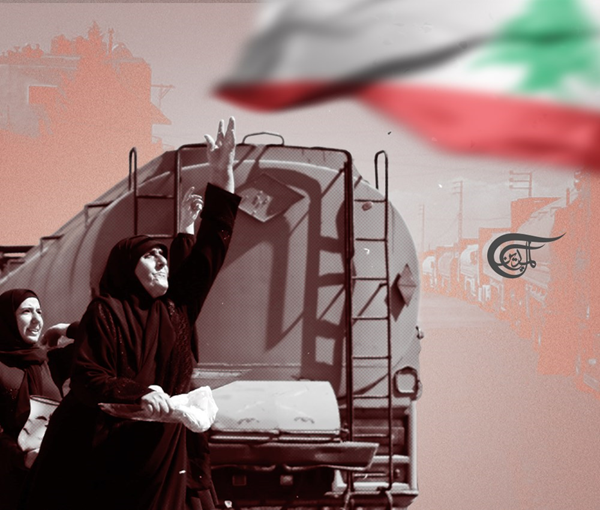 There are many indications carried by the arrival of Iranian diesel convoys from Syria to Lebanon. The resistance confirmed that its role includes aspects beyond fighting occupation and terrorism.

On August 19, which coincided with the 10th of Muharram, the Secretary-General of Hezbollah, Sayyed Hassan Nasrallah, announced the launch of The first fuel steamer From Iran to Lebanon.

The American side was surprised. As a result of the confusion, the American ambassador in Beirut, Dorothy Shea, rushed to contact Lebanese President Michel Aoun, and informed him of her country’s approval to import natural gas and electricity from Egypt and Jordan to Lebanon, via Syria, disregarding the “Caesar Law”.

When Hezbollah announced its intention to bring fuel from Iran to Lebanon, its initiative found a lot of objection and skepticism among internal and external opponents, and an opportunity for them to break the credibility of its Secretary General.

While the former US Assistant Secretary of State for Near Eastern Affairs, David Schenker, described Sayyed Nasrallah’s announcement as “an unbelievable story, and a political maneuver to avoid the wrath of public opinion, and that it involves audacity, and a clear violation of the sanctions imposed on Iran.”

But the fact that diesel convoys crossed into Lebanon, via Syria, dropped all these bets. The achievement represented a validation of the saying that “life is resistance”, which does not stop at liberating the land and fighting terrorism, but rather it engages in treating people’s pain.

It is a message addressed, before anyone, to those who falsely accuse the resistance of promoting a culture of death, for here it rescues the people from a slow death, in nerves, times and oppression, towards a clear breach of an indirect siege wall, or at least not officially recognized.

It is a direct message to everyone who accuses the resistance of being not from the people. Here it is, once again, showing the world, She is from the people, and she lives his pain and achesAnd always ready to sacrifice for his good life.

The Other Side of Victory In politics again, the resistance has been a victorious axis, the mainstay of which is the tripartite cooperation between Iran, Syria and Hezbollah.

There is a reversal of the scales, the time of which has come, so what was on the sea and land, and the American and his axis were satisfied with watching the new reality, they have nothing to do, and they are not able to do it even if they could, in light of deep changes taking place in the region.

On land, trucks crossed without hindrances, and at sea, Iranian ships were moving amid the inability to prevent them, both American and Israeli.

The sacrifice here lies in the field aspect in particular. The resistance took all the necessary steps to secure the convoy’s arrival in Lebanon, from Iran through Syria.

Washington, which considered the arrival of Iranian oil to Lebanon as a fantasy, only found the Egyptian gas pipeline to compensate for the disappointment, and to camouflage the siege of “Caesar”. It is another achievement added to the record of the resistance, as long as the goal is to get Lebanon out of its crisis, so why did Washington and “Tel Aviv” fail to subdue the resistance?

The writer in political affairs, Michel Abu Najm, said that “the American strategy aimed to separate Hezbollah, as a resistance, and its foster environment.”

In an interview with fieldsAbu Najm stressed that “the military dimension of the resistance is not complete without the completion of the economic and social dimensions, which constitute a basic pillar of the tributaries of supporting the military resistance,” noting that “the society is not only resisting with weapons, but rather it needs support through the necessities of life.”

He pointed out that “the strategy of the United States depends on the concept of soft power, in addition to military force. This form of war is the harshest type of war,” pointing to the peculiarity of this confrontation, and that Hezbollah “dealed with it gradually, especially since the repercussions of October 17 /October 2019”.

#evening | What is proven today in the balance of power that he possesses? #Lebanon؟ #Convoys _ sincere _ promise #Shift_Promise_Sincere #Syrian Arab Republic #Iran@ramiaalibrahim pic.twitter.com/vqj6YfOcEH

In turn, the writer and researcher in Israeli affairs, Hassan Lafi, said that “Hezbollah perpetuates a new scene, which is that the resistance is capable of breaking the American and Israeli hegemony,” adding that “Israel has been working, in recent years, to demonize Hezbollah by investing in crises. Lebanon”.

Lavi noted, in an interview with fields, He pointed out that “Israel” “cannot hit the fuel convoys, because they will pay a heavy military price,” stressing that “the axis of resistance has turned into a lifeline for Lebanon after Israel worked to portray it as the cause of problems.”

#evening | Why didn’t you dare #United State Or “Israel” to deal with a ship #fuelFrom the moment of its departure from the Iranian ports, until its entry #Lebanon via #Syrian Arab Republic؟ #Convoys _ sincere _ promise #Shift_Promise_Sincere #Iran@ramiaalibrahim pic.twitter.com/o5JCtvc4JB

For his part, former Pentagon analyst Michael Maalouf said that “Hezbollah’s actions should be commended after all parties, including the West, watched the Lebanon crisis.”

He added, in an interview with fieldsAnd that “the Biden administration’s strategy will be under the microscope with regard to any confrontation, whether it is maximum pressure or sanctions, not only towards Lebanon, but also towards Iran,” stressing that “Washington should stop looking at countries through the eyes of Israel.”

#evening | do you stand up #United State Horrified and helpless in front of convoys #fuel that was entered into #Lebanon Today the siege was broken? #Convoys _ sincere _ promise #Shift_Promise_Sincere @ramiaalibrahim pic.twitter.com/Zse8bScz8f