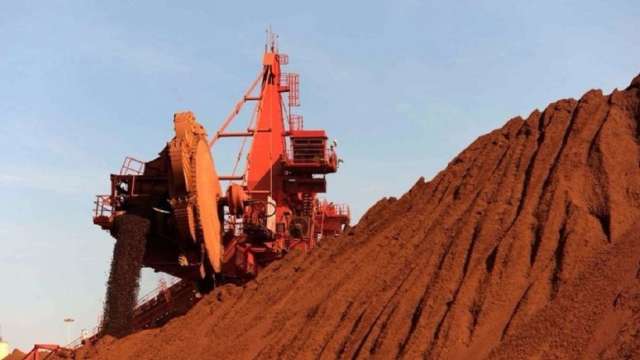 China is banning air pollution for next year’s Winter Olympics and imposing production restrictions on the steel industry. Coupled with the sudden decline in the housing market’s impact on demand, iron ore has recently been under heavy selling pressure. Futures prices fell below 100 per ton on Friday (17th). Dollar, It is the first time in 14 months. It has collapsed by more than 20% this week. It is the biggest weekly decline since the financial tsunami in 2008. It is very different from the scene of other raw materials rising rapidly.

The futures price of iron ore traded in Singapore fell to the lowest of 99.50 on Friday Dollar, Hovering at 100 most of the time DollarIn the vicinity, it has collapsed by 22% this week. If it exceeds 230 per ton from May DollarCounting from its historical high, it has fallen by more than 55% so far.

The Beijing authorities are severely restricting the production of the iron and steel industry, and the boom in China’s housing market has dampened the market’s demand for this steel raw material. It also highlights that China, as the largest steel manufacturer, has a significant impact on the price of iron ore.

Ed Mier, an analyst at ED&F Man Capital Markets, said that the sharp drop in iron ore prices is mainly due to the market expectation that China will strictly implement production restrictions this year.

The drop in the iron ore market also made the miners who had made a lot of money in the first half of the year sad. Major miners including BHP Billiton (BHP), Rio Tinto (Rio Tinto), and Vale (Vale) plunged.

Iron ore is now at the bottom of the ranking of major commodities. Most of the other raw materials are rising as the economy restarts. The price of aluminum has recently soared to a 13-year high, the price of natural gas is soaring, and coal futures are also at unprecedented high prices.

The prospect is under pressure

UBS (UBS) estimates that the price of iron ore will fall, and the average price next year will be 89. Dollar, Which is revised down 12% from the previous estimate.

UBS said that the heavy selling pressure has caused the volatility of iron ore prices to soar to the highest in five years. The current port’s iron ore inventory is 10% higher than a year ago.It is expected that Chinese demand will further slow down, while global supply continues to increase。

The effects of China’s production restriction measures are emerging. In August, steel production fell to a 17-month low and continued to decrease in early September.

However, China’s production restriction policy has led to a sharp rise in steel prices, and the spot price of steel bars is approaching the highest price since May-although it is still 12% lower than the historical high price set in the month. Citigroup said that China’s production cuts are far outpacing the pace of declining demand.

(This article is not open to partners to reprint)