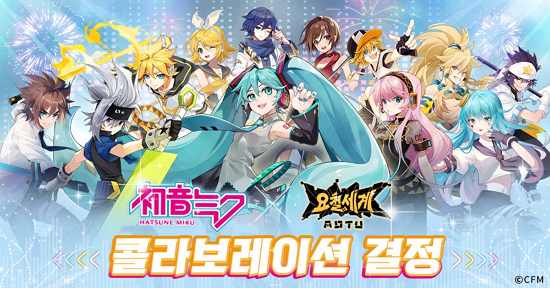 On the 29th, Gaia Mobile announced that the mobile strategy RPG ‘Irregular World’, which will be serviced by the company, plans to conduct a special collaboration with several famous virtual singers, including Hatsune Miku, after the game is released.

‘Irregular World’ is a mobile strategy RPG produced by the animation production company 7Doc (七创社: Chilchangsa) directly participating in the development of the animation ‘Irregular World’, which was very popular in China. A unique genre of art called Low-Poly was used to emphasize fast-tempo strategic play and the sense of hitting, and the design of ‘Move & Action’ fuses the commands of character movement, defense, and attack into one. characteristic.

Since the beginning of May, ‘Irregular World (English: AOTU World)’ opened its official website and started global pre-orders in Korea, the US, Canada, Japan, UK, Germany, France, and several Southeast Asian countries. And to satisfy the increased interest of global users, the world-famous virtual singers Hatsune Miku, Megurine Luka, Kagamine Rin, Kagamine Len, and KAITO ), announced that they are preparing a collaboration with MEIKO.

‘Hatsune Miku’ is a ‘software’ developed by Krypton Future Media Co., Ltd. of Japan that allows anyone to sing a song by inputting the lyrics and melody. Numerous creators made music through ‘Hatsune Miku’ and posted it on the Internet, and these activities began to become popular. In particular, ‘Hatsune Miku’ received attention as a ‘character’ and is now active in various fields such as merchandise sales and live concerts as a virtual singer, gaining popularity around the world. ‘Kagamine Rin’, ‘Kagamine Len’, ‘Megurine Luka’. ‘MEIKO’. ‘KAITO’ is also a virtual singer of Krypton Future Media Co., Ltd.

These six virtual singers will appear as new characters through a special collaboration with ‘Uneven World’, and Megurine Luka along with Hatsune Miku will appear as the rarest and highest S-rated character in the game, raising expectations.