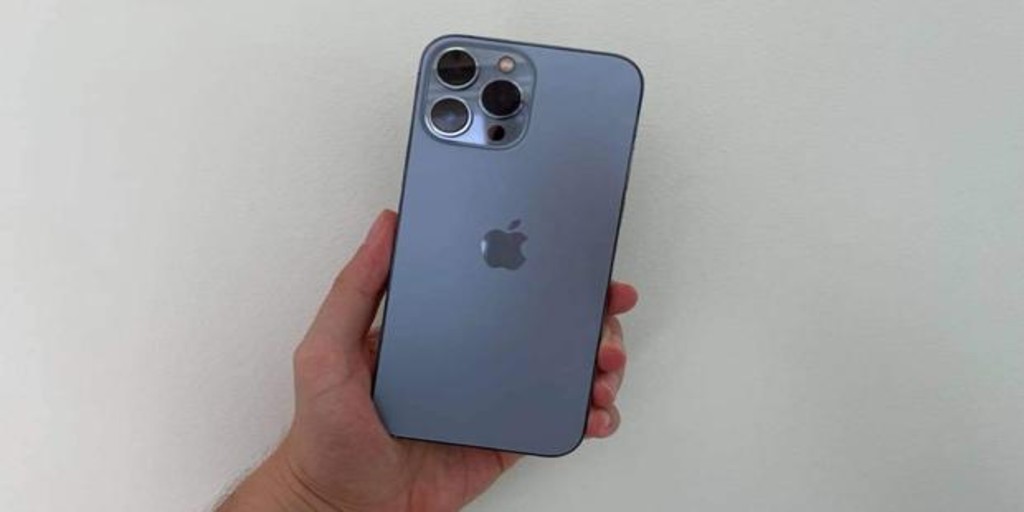 Apple does not miss an appointment. The Cupertino company has chosen the month of September, as almost always, to launch its last big bet in telephony, that of iPhone 13, which, as happened with its direct predecessor, is made up of 4 terminals differentiated by their sizes and characteristics. The spearhead, however, is made up of the Pro and Pro Max models. These two ‘smartphones’, larger than the rest, include novelties that the user will not be able to find in the little brothers and, obviously, not in the iPhone 12 of last year. Are they enough to justify an outlay that, depending on the model, may be close to 2,000 euros? It depends on the use that goes to him

At ABC we have been testing the iPhone 13 Pro Max, the most cutting-edge of all of the apple firm, during the last week; long enough to realize that the bet improves on what it was before, but up to a point. It would be a mistake for the ordinary user to think that the new Pro and Pro Max represent a great revolution with respect to the iPhone 12. The terminals have specifications similar to those of their predecessor. The screens, in addition, move in the same sizes; in the 6.7 inches in the case of the Pro Max model and the 6.1 of the Pro ‘just’.

The design of the devices does not vary much either; The same can be said of the weight, which goes up a bit, but it is not a drastic difference. Perhaps those who are used to smaller terminals will notice the change and the new mobile may find it somewhat uncomfortable. During the tests, we have not found any fault in this regard. Neither in the grip, which is still good, although somewhat more complicated in the case of the Pro Max due to its dimensions.

That the new iPhone 13 Pro does not represent a revolution does not imply that they do not provide the user with tools that, in some cases, can justify their purchase. Especially for those users who give a more professional use to the ‘smartphone’. One of the main novelties that the Pro incorporates, which not the normal iPhone 13 and the mini model, is the 120 Hz on-screen refresh rate, which allows the display of content to be much more fluid than in the rest of the mobiles launched by Apple to date. Let us remember that this technology is far from being a novelty; It has been around for a long time on Android devices, even those with a lower price. The same has happened with other technologies, such as 5G, a network for which Apple just a year ago had not manufactured any compatible device.

This change, which allows the image to be varied up to 120 times per second, is sensed in all the actions carried out by the user. The actions they are somewhat more fluid than on the iPhone 12; from moving around the device interface to using applications. Without a doubt, it is an interesting change that is missing in the iPhone 13 and iPhone 13 mini that, as we have explained, do not incorporate the technology. Beyond this, the resolution of the OLED screen mounted on the terminals is still more than enough. There is not a big change from what the iPhone 12 offered – and continues to offer.

Below the panel, the mobile incorporates the nnew A15 Bionic chip, which is self-made. Although it is present in all models, the most advanced version, which includes a 5-core GPU, is only present in Pro models; the processor of the other two stays at 4. This, however, is not a change that should matter to most users. Apple’s chips have been shining brighter for years than those of the competition: they can with everything that the user throws at them; from moving the heaviest applications, to editing videos or playing video games. In the case of the iPhone 13 things do not change.

If we talk about the battery, we find another small jump. During the tests, this newspaper has been able to use the mobile intensively for a whole day without the battery ever getting close to 25%. With this in mind, charging at night to avoid a rush the next day is more than enough. Although it is not a great increase compared to the 12 Pro, which already held their own, it does notice a greater autonomy. Regarding the memory, in addition to the options of 128, 256 and 512 GB we find a new 1 TB, that is, 1,000 GB. Depending on the capacity, the price of the terminal varies.

The best camera in an Apple mobile

Among the changes, the new cameras of the Pro models stand out. If a year ago we said that the best iPhone to record and capture images was 12, now we have no doubt that the most cutting-edge is 13. Which, well seen, is his own and should be taken, practically, for granted. The Pro and Pro Max incorporate three lenses on their rear with the same capabilities regardless of the model: a main sensor (12 MP), an ultra-wide angle (12 MP) and a telephoto lens (12 MP).

These sensors, which are accompanied by another on the front, also 12 MP, have a outstanding performance; improvements are noticeable, especially in low light situations. The terminal also incorporates a new option called ‘Profiles’, which allows you to adjust the cameras with a series of filters to obtain different results in the color of the image. A new macro option is also incorporated for close-up photography that gives good results, but cannot be activated manually at the moment. On the contrary, we must approach the object in question so that it comes out automatically. Something that is a bit annoying.

If we take all this and shake it, we realize that there is a jump. Maybe not enough to convince a basic user to run to the store to buy one of the new terminals, but the improvement in the cameras compared to the iPhone 12 Pro and Pro Max exists.

It also improves video recording. Beyond the 4K resolution, which was already present in the iPhone 12, the 13 Pro stand out for the arrival of the cinematic mode, which allows the user to change the focus while recording. Unlike the macro, it can be selected manually from the camera screen. Specifically, the functionality allows people and animals to be recognized during recording, if you press on each one, the camera will start to focus on it. It also works perfectly with objects. Possibly it is a tool that will not be of interest to the basic user, however, video lovers will surely know how to value it.

As we warned in the first paragraph, it depends. Apple has created two terminals that have better cameras, new recording options, greater autonomy and superior fluidity. And that’s fine, they are changes that photography lovers and those who are used to squeezing their terminals will like. For the rest, for those who settle for a mobile that is left over in all aspects even if it does not include these options, the iPhone 12 Pro, or even a lower terminal, more if the 5G does not give them a little equal, it is a better option. The device, of course, will be cheaper. And it is necessary to bear in mind that the iPhone 13 Pro start at 1,159 euros and can reach 1,839 in case the user wants the Max model with 1TB of storage.

In addition, it must be borne in mind that it is becoming easy to find terminals of the iPhone 12 family that force you to spend much less. And if we talk about the 11 or X models, which still have a lot to offer, the outlay becomes even lower.

Analysis carried out with terminals assigned to ABC by Apple