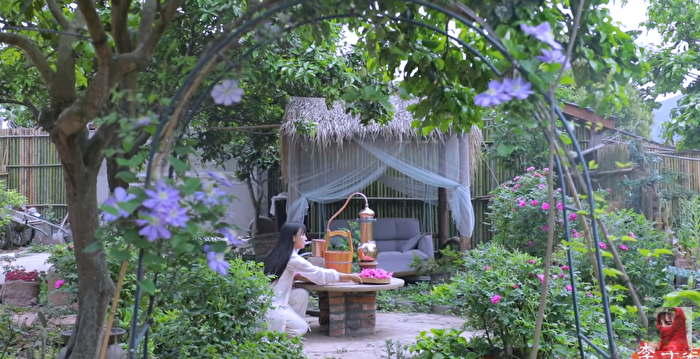 [Epoch Times September 25, 2021](Reported by Epoch Times reporters Cheng Jing and Xiaohua) China’s number one internet celebrityLi ZiqiAfter “disappearing” more than 70 days later, she finally showed up. On September 23, she was hired as the “Image Ambassador of Sichuan Farming Culture”.However, behind hercapitalThe dispute seems to be unresolved, the suspense is still there, and the doubts are still not resolved.

Thursday (September 23),Li ZiqiHe appeared at the 2021 Chinese Farmers Harvest Festival and was hired as the image ambassador of Sichuan farming culture. She said, “Li Ziqi used to build his own small home, and I want to build a new Chinese countryside in the new century that is sustainable, developable, extendable, replicable, and spreadable for the Chinese people.”

Jiemian News reported that in words, Li Ziqi distinguished “Li Ziqi” from “I”, and Li Ziqi is indeed in such a turmoil at the moment.

From July 14 this year,Weibo fansLi Ziqi, who has reached more than 27.6 million, stopped updating the video, and suddenly posted on the social media platform Oasis late at night on August 29, saying that “I was sickened, so soon I can’t stand it?” In the morning of the next day, Li Ziqi also said that he “called a policeman” and mentioned in the comment section when replying to netizens, “It’s terrible!capitalIt’s really a good way! “

At the end of August this year, Assistant Li Jiajia responded on social platforms, “Seven sisters are only temporarily sorting out problems between the company and third-party companies.”

There is a lot of discussion from the outside world, does Li Ziqi have trouble with “capital”?

The data shows that the annual sales scale of the Li Ziqi brand in 2020 is about 1.6 billion yuan, crushing most A-share listed companies. Many people think that the Li Ziqi brand is Li Ziqi’s red hand, even if it does not take the big head, it is also among the main beneficiaries.

However, the “Li Ziqi Brand” equity structure chart does not support this.

Jiemian News said that in 2016, Li Ziqi was still a small anchor, and he was spotted by Hangzhou Weinian founder Liu Tongming. Both parties signed a contract. Li Ziqi focused on content and Liu Tongming was responsible for marketing and promotion.

In July 2017, the cooperation model between the two parties changed from a contract to a joint venture, and Sichuan Ziqi Culture Communication Co., Ltd. was established with a registered capital of 1 million yuan. Li Jiajia (Li Ziqi’s real name) served as the legal representative, but the major shareholder was Hangzhou Weinian. 51% of shares.

In August 2018, Li Ziqi’s flagship store on Tmall was launched, and Li Ziqi launched the snail noodle product, but the main body behind it was Hangzhou Weinian, and there was no Li Ziqi among the shareholders.

Hangzhou Weinian’s shareholders do not have Li Ziqi. Therefore, Li Ziqi has no right to speak with Hangzhou Weinian, even in the joint venture between the two parties.

The report said that this is obviously a hidden danger. Once the conflicts between the two parties are irreconcilable, Li Ziqi will undoubtedly be at a disadvantage when vying for the ownership rights of “Li Ziqi” related trademarks, accounts, and online stores.

“Economic Observer” analyzed that the three words “Li Ziqi” do have incalculable commercial value, and the share ratio is determined. Li Ziqi cannot obtain enough IP realizable benefits through equity, and the right to speak is still in control. MCN (multi-channel network) organization. If it wants to “untie”, Li Ziqi may not even be able to take away the IP and the corresponding account.

Because of this, many people say that Li Ziqi was “put together (calculated)” by capital. Such an asymmetry between shareholding ratio and contribution intensity can easily lay the roots of contradictions.

Some analysts also said that without the appearance of Li Ziqi’s Li Ziqi brand, the commercial value of Li Ziqi’s brand will be greatly reduced, and Hangzhou Weinian’s value in the eyes of capital will also be revalued. This is not a good thing for several parties.

The Epoch Times reporter contacted Li Ziqi’s agent and the agent of China TV Entertainment Media Guangzhou Co., Ltd. Zhang Yong. He said that Li Ziqi does not accept media interviews. The reporter asked Mr. Zhang again if he could tell about Li Ziqi’s situation. He said Can’t speak and hang up.

The operation behind Li Ziqi

Li Ziqi once said: “The life skills in everyone’s eyes are just my survival instinct. It used to be for survival, but now it is life.”

However, her original hard life in the country was not only used by capital, but also by politics. “The content of these videos is in line with the needs of the CCP’s external propaganda.” Beijing artist Monsoon told The Epoch Times, “This thing of hers can be used by the CCP to promote the beauty of the countryside, and she can also start her own business. She took pictures of the countryside. The shots are beautiful, but most of the rural areas are now barren and desolate, and the fields are not planted.”

In the past few years, Li Ziqi has been given a series of political titles, such as: member of the 13th All-China Youth Federation, promotion ambassador for the leader of China’s rural youth getting rich, Chengdu intangible cultural heritage promotion ambassador, Chinese youth good netizens, and so on.

The mainland independent critic Zhang Qi once told The Epoch Times that the CCP will create some characters and establish some heroes to guide public opinion and control society in different periods, but this creation will not leave official traces like in the past, “because (the original propaganda method) ) There is no market now.” It will operate through some commercialization. “Just like the Global Times is trying its best to seek communication effects and seek its own public opinion venue.”

Public information shows that Li Ziqi’s real name is Li Jiajia, born in 1990 in Mianyang, Sichuan. His parents divorced from childhood and lived with his grandparents; he dropped out of school and went to work in the city in 2004. In 2012 he went home to take care of his seriously ill grandmother. Taobao store promotion began to try to produce food videos.