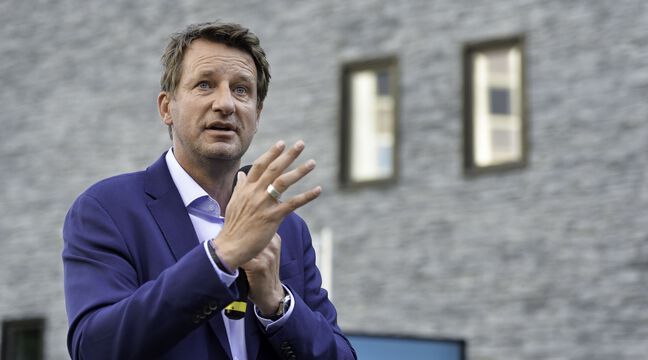 Traveling to Angers to support the environmental candidates for the regional during a football match in mid-June, Yannick Jadot was having fun, between two actions, with his jerky breath. “Football is not the same pace as in politics, it’s intense. A campaign is more of a marathon. The MEP, who does not hide his ambitions for the 2022 presidential election, knows that the road is long to reach the Elysee Palace.

First step: the primary organized by Europe ecology-Les Verts at the end of September. And this week, the game has accelerated with the candidacy of the mayor of Grenoble, Eric Piolle, who joins that already recorded by Sandrine Rousseau. Yannick Jadot, for his part, often remained ambiguous about a participation. Could he step over it to launch directly into the presidential election? The MEP is the guest of TF1’s JT this Wednesday evening, before gathering his support this weekend in Colombes (Hauts-de-Seine), to consider the rest.

On the program of the festivities: the assessment of regional, programmatic workshops and, before a speech by Yannick Jadot on Sunday, discussions on the famous internal ballot. “We have to examine the organizational arrangements. Is it a question of an identity primary, which would be limited to choosing the most radical candidate to make 5%, or does it allow to launch a sufficiently powerful dynamic so that the ecological force is present in the second round in May 2022? », Asks one of his supporters, the former senator EELV Jean Desessard.

The conditions are, however, already set: the primary will be open to environmental sympathizers, subject to the signing of a charter of values ​​and a participation of 2 euros.. In the entourage of the MEP, the same speech has been repeated for several months: “To have a primary restricted to ourselves around 30,000 participants would be a failure. We must hope to double or even triple this figure to obtain a propulsive force. “

Jean Desessard is annoyed with the delay in the organization and puts pressure: “ Nobody is aware of this primary, there are already two months late for registrations, the charter is not acted, the programmatic elements unclear. All this raises questions. Do we have the means to straighten the bar quickly? “

Jadot, target of EELV activists like Duflot and Hulot before him?

Camp Jadot knows too well that a too closed primary could be fatal. Because the profile of the MEP, more pragmatic and centrist than his rivals, is not necessarily to the taste of the greenest base of the party. They also know that environmental activists have often taken pleasure in cutting off the heads of their favorites, such as Cécile Duflot, eliminated in the first round in 2016, or Nicolas Hulot in 2011.

“Two new facts will prevent this self-fulfilling prophecy: Yannick is well surrounded by party officials and has worked on his territorial network. And I believe activists have evolved in terms of accountability. The climate emergency requires us to choose the best candidate, ”replied the European elected Mounir Satouri, his campaign coordinator. “Let’s not forget that Jadot has already won the primary in 2016 [avant de sceller une alliance avec Benoît Hamon]. It was the same Jadot, already a friend of Cohn-Bendit [réputé centriste] and even more than today ”, quips Desessard.

At the party, no one imagines an out-of-primary candidacy

At EELV, no one imagines a solitary candidacy from Yannick Jadot. ” I have no doubt. I see no other path than the designation by his own, “warns MEP David Cormand, former head of the party. “I don’t see any other alternative between participating in the primary or not going at all. A dissenting candidacy is not possible, if only financially, ”adds Marine Tondelier, Eric Piolle’s campaign coordinator.

Senator Esther Benbassa wonders for her part about the risk of low participation, in a context of historic abstention at the last regional. “I want the primary to bring together as many people as possible, but the time is short, it will be difficult. Jadot is hesitant because he is afraid of not being chosen, and he has more to lose than the others. He may decide to go alone, but that would be very bad. We are not there yet, I prefer to stay positive, ”she said.

In the entourage of the person concerned, we prefer to calm things down. “Yannick Jadot has always been loyal and faithful to his political family, it is not now that he will leave this line,” reassures Mounir Satouri. The MEP has until July 12, the closing date for applications, to dispel once and for all the doubts of these friends.