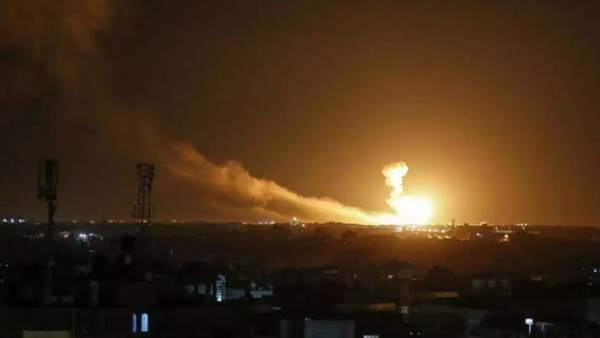 The Israeli Air Force bombed, at midnight Tuesday/Wednesday, targets in the vicinity of the Syrian capital, Damascus, for the first time in more than a month.

SANA said that the Syrian air defenses repelled “Israeli aggression,” and indicated that the bombing of the Syrian capital came from “Lebanese airspace.”

The agency had announced that explosions were heard in the sky of Damascus. And it reported, “3 explosions sounded in the airspace of Damascus in conjunction with the flight of Israeli planes over the Lebanese Bekaa Valley.”

It quoted a military source in the Syrian regime’s army as saying: “At 11:36 p.m. on Tuesday evening, the Israeli enemy carried out an aerial aggression from over Lebanese territory.” He added that the attack targeted “some targets in the central and southern region. Our air defenses confronted the aggression’s missiles and shot down some of them, and the losses were limited to material.”

For its part, the Syrian Observatory for Human Rights said that “violent explosions resounded in the city of Damascus and its surroundings as a result of Israeli strikes on military sites, and the Syrian regime’s anti-aircraft forces attempted to confront them in the sky of the region.”

The observatory added that the explosions resounded in the vicinity of Damascus International Airport and an air defense battalion in the Dumeir area, and in the southwestern part of Homs Governorate in central Syria.

The strikes resulted in human losses in Homs, as rescue teams headed to the targeted sites, in addition to the explosion of weapons depots in the Dumayr area, according to the observatory, which spoke of eight deaths, and later reported that the death toll had risen to ten, including seven of them. Non-Syrian nationalities.

The Russian “Sputnik” news agency quoted a security source as saying that “a number of missiles launched by Israeli aircraft from over Lebanese territory, targeted sites in the vicinity of the city of Homs.”

The source denied recording any bombing in or around the capital, Damascus. At the same time, he revealed that all the voices heard in this area were caused by the response of the Syrian air defense bases in the southern region to the Israeli bombardment around the city of Homs.

The last Israeli raid on Syria was on May 15. Depots of weapons and ammunition belonging to the Iranian forces were targeted in the Deir Shamil area in the western Hama countryside, and a building in the Ras Shamra area in the Latakia countryside.