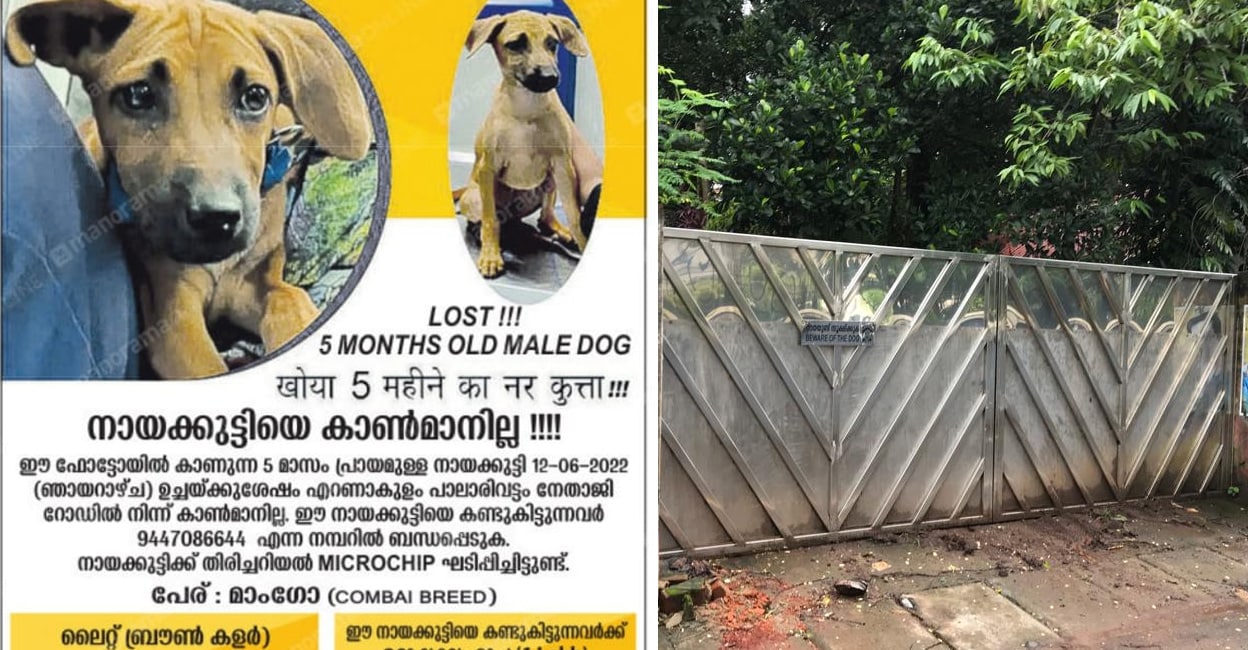 Kochi ളിൽ In the Bible, the story of Dr. Anand Gopinath, a native of Palarivattom, is similar to the story of a shepherd with 100 sheep who goes missing and searches for one. The veterinarian doctor has a lot of dogs in the house. From combo and dash and Pomeranian to native dog. Among them is a dog named Mango, a breed of Kombai, who went missing. The doctor spent Rs 2.5 lakh to get back a five-month-old dog worth less than Rs 25,000. The prize for those who return the dog is Rs 1 lakh.

The five-month-old dog has been reported missing in the Malayala Manorama newspaper. The doctor gave a newspaper advertisement all over Kerala for the dog that went missing from Netaji Road, Palarivattom. The advertisement price alone will be Rs 2.5 lakh. The doctor came to the newspaper office asking what it would cost to place a large ad on the front page. When he said it would be at least eight lakh rupees, the doctor was ready for it too. Eventually the cost was reduced a little and the entire Kerala edition was advertised on the inside page.

Two months ago, a doctor bought two puppies of the Kombai breed from Tamil Nadu. One of these is missing. It is believed that he may have gone outside when the gate of the house was left open from time to time. It is suspected that the puppy was picked up by someone who liked it. The doctor had already placed an ad on social media asking those who found the dog to return it, but to no avail. With this came the idea of ​​newspaper advertising.

Mango is a handsome man with light gray eyes. The doctor says he has a special fondness for dogs. A few days ago, a dog that was injured on the container road was brought back and taken care of and made healthy. Neighbors also say the doctor, who has no siblings or significant friends, has a special love for dogs. The doctor takes special care to keep the dogs out and not to disturb the neighbors. The high wall and gate are built to avoid the commotion of people. Special care is taken not to disturb patients who seek treatment at the doctor’s clinic.

Still the dog was coming out through the gate. The dog got its name from Kombai in Theni district of Tamil Nadu. It has been kept as a watch dog by the locals since the time of the British. It is also known in the area as the best watch dog. Kombai is a strong breed with strong muscles. He shows love and loyalty to his masters and treats strangers very badly. Therefore, it is difficult to deal with strangers.

It is also used by many as a hunter. According to locals, Theni district has a history of using them to protect the locals when they were attacked by the British. After the 1960s, the government became aware of their endangered species and set up special breeding grounds for them, along with other endemic dog breeds.

English Summary: One lack reaward for those who find the missing Puppy

The country of shooting (2) Siamrath