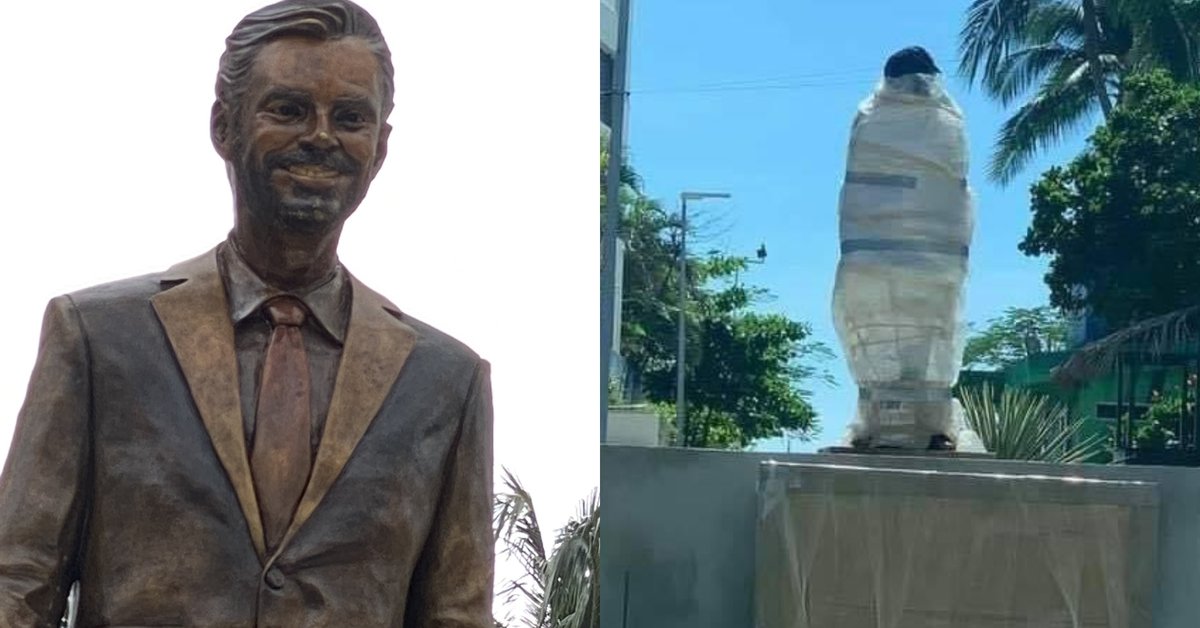 They inaugurated and vandalized the statue of Eugenio Derbez in Acapulco (Photo: Twitter / @ eyc1104 – @JorgMontesDeOca)

Eugenio Derbez crossed borders and from USA, where he now lives, he moved to Mexico, but only in statue form. His figure reached Acapulco, in the state of Guerrero, where they inaugurated a roundabout in his honor.

This effigy was raised in front of the Elcano hotel, very close to the coastal avenue, last Saturday, October 9, 2021; Nevertheless, the population has made their displeasure very clear and they even spoke out.

“Inauguration of the roundabout Eugenio Derbez in gratitude for his contribution to the dissemination of Acapulco in the world ”, can be read on the huge plaque below the representation of the actor and comedian.

They inaugurated and vandalized the statue of Eugenio Derbez in Acapulco (Photo: Twitter / @ eyc1104)

The work was supposedly in charge of the Guerrero State Highway and Airport Infrastructure Commission, of the government of Hector Astudillo Flores, constitutional governor, as well as Javier Taja Ramírez, general director of the OPD.

For its part, Eugenio Derbez He preferred to remain silent on social networks, where he did not comment on his face in one of the most requested tourist destinations in Mexico, despite the fact that his appearance went viral.

And days later, the sculpture was vandalized, full of plastic bags and gray tape that cover each part of the body of the statue, in addition to completely covering the plaque announcing its inauguration.

The above, in a sign of rejection, because through social networks, hundreds of neighbors and thousands of citizens of Guerrero were in complete disagreement with the decision of the public administration, and showed their hatred with strong comments, critical or funny insults memes

A few hours after these actions were announced, Yair García Delgado, director of the Municipal Planning Institute of the city, he assured that if society requests it formally, said sculpture will be withdrawn.

They inaugurated and vandalized the statue of Eugenio Derbez in Acapulco (Photo: Twitter / @imsadokg)

In this sense, he put on the table a meeting with the cultural community, in which authorities of the Commission of Highway and Airport Infrastructure of the State of Guerrero and its head, Javier Taja will also be present.

“The one who always has the last word is the citizenry and in that sense, we would be establishing institutional communication with the cultural community and civil society that wants to integrate in order to give a better orientation to that statue,” said the journalist Óscar Ricardo Muñoz Cano.

In addition, the writer also reported that citizens could be protected under Law 444 for the Protection of the Cultural and Natural Heritage of the State and Municipalities of Guerrero, where it is indicated that to put names of people to locations in the state, it is essential that they have stood out for their actions at a local, national or international level in culture, education, science, technology or sports, taking into account the feelings of the citizens.

However, it was not necessary for this to happen, because hours after the vandalization of the sculpture was announced, the local authorities proceeded to remove it from its site, and so far, there are no reports that it has returned to its place.

The above finds its context in the most recent series that Eugenio Derbez has premiered on Apple TV +, named with the same name that city in Guerrero, “Acapulco”, based on the dreams of Máximo Gallardo.

“Acapulco” will tell us how it was that Máximo Gallardo was able to get his dream job at the hotel The hillsOnly now Eugenio will play his character as an adult.

This is how they recorded the passionate scene between Ulises and Renata in “Amarte hurts”
They criticized Carlos Muñoz on Twitter and even Palazuelos got involved
“La bebeshita” uncovered the rejection of her fellow MasterChef Celebrity: “Nobody chose me”