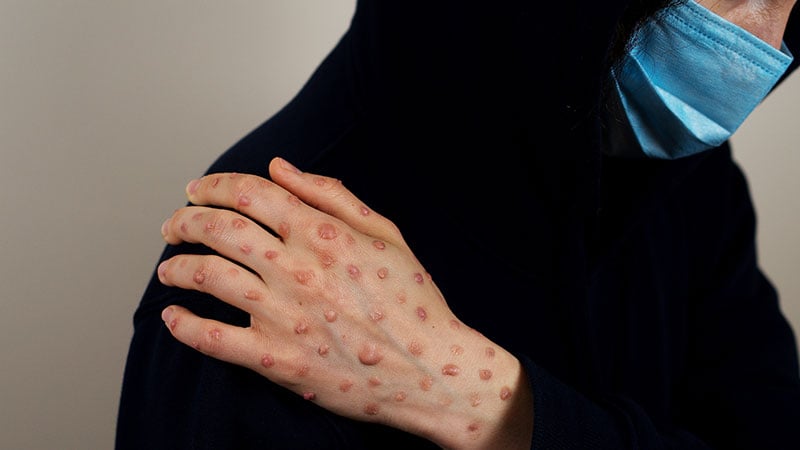 UK – More than 18,000 cases of monkeypox have now been reported to the World Health Organization (WHO) in 78 countries, leading the organization to call the outbreak a ” public health emergency of international concern “. With 6,600 registered in the United States, the White House just said in turn the outbreak of public health emergency. As of August 4, 2 423 confirmed cases had been identified in France.

Every country is worried about the progression of the disease. If Medscape French edition interviewed the Dr Benjamin DavidoMedscape UK has spoken with the Dr Catherine SmallwoodSenior Emergency Manager for WHO Europe and Monkeypox Incident Manager for Europe, on how the outbreak is spreading.

Medscape UK : Until recently, monkeypox was confined to endemic areas of the world – why has this infection spread around the world?

Dr Smallwood : There are probably many different reasons. What we have seen with monkeypox in the West African region over the past five years or so was an early signal that something was changing in monkeypox transmission. , even in countries that may have zoonotic spread.

Nigeria first detected monkeypox in 2017 and since then has experienced recurrent and quite large outbreaks of monkeypox that have affected urban settings and therefore were likely caused by human-to-human transmission.

It is likely that following the export of cases from Nigeria, there has been “foci seeding” in countries like the UK or other parts of the world. For some reason, these seeding events probably took hold and really started to expand early this year.

In combination with the lifting of the measures taken at the beginning of the year for Covid-19, the return of people to events where they gather much more closely, the events which took place around May of this year – parties like gay pride that brought people together – and international groups of people probably played a role in amplifying the phenomenon.

Why did the amplification occur?

Dr Smallwood : Potentially, the decrease in our immunity against smallpox, at the population level. The increase in the number of susceptible individuals within the global population has created a new niche for monkeypox transmission, which likely contributes to the current spread.

There is of course another factor to consider: “has the virus changed?”, “are there specific mutations in the virus that have caused phenotypic changes? – the experts are not We’re still not set on this point. All these elements have probably combined to lead to what we are currently observing.

Should monkeypox be considered a sexually transmitted infection (STI)?

Dr Smallwood : There was quite an intense discussion around this issue. There are several advantages and disadvantages to considering it as such. What is clear is that monkeypox is spreading massively in countries in Europe, and in countries other than those where it is endemic, through sexual activity, primarily due to spread by close contact.

While the current epidemic is primarily driven by sexual activity, this is not exclusively the case. In fact, the first cluster of cases that was detected with no link to endemic countries was in a domestic transmission setting. On the other hand, as with many other STIs, there are multiple modes of transmission. Thus, if we go down to the level of the very specific definition, the current epidemic of monkeypox could correspond to the definition of an STI with the advantages of diverting the attention of MSM and helping to de-stigmatize the disease.

However, the downside is that this could put all the focus and attention on that particular route of transmission, and then neglect episodes of transmission within households, which could even become more important as the epidemic progresses. evolved. So I think we need to continue to be a little more nuanced in how we describe the situation.

What are the other routes of transmission?

Dr Smallwood : Studies are underway to examine the survivability of the virus on different materials under different conditions, but it is certain that environmental contamination – especially when it is a household or a closed environment – is a key element and can play an essential role in transmission within the household, or potentially at the hospital level if patients are hospitalized. The extent of transmission in patient hospital rooms had been documented in a recent UK study, which found quite significant contamination in hospital rooms.

People worry about airborne transmission and some studies have found positive samples of the virus in the air and it’s been documented when people change the sheets or the bed, and that throws the virus into the air . It is therefore a key element.

Maintaining good ventilation is also really important. These are the messages that we would like to put forward. Cleaning toilets, showers, taps, washing hands is going to be very important in the context of monkeypox, especially in a domestic setting.

The good news is that we have not yet been informed of any occupational exposures of healthcare workers in this current outbreak.

Should everyone be vaccinated, regardless of the risk?

Dr Smallwood : The WHO does not recommend everyone get vaccinated against monkeypox for different reasons. In our opinion, it is not necessary, and it is not possible.

The risk of monkeypox at the general population level, the risk of exposure is really still quite low.

However, it is much, much higher in a group of MSM – not all MSM – a group of MSM who have a lot of sex with a lot of different partners, and this is particularly the group that is most at risk in this moment.

First the Covid now the Monkeypox – What is happening in the world to enable these outbreaks?

Dr. Smallwood: That is the question we ask ourselves. And also, how has the pandemic changed the epidemiology of our countries and our region? Would we have seen a monkeypox outbreak sooner if COVID hadn’t happened? Or have we found that monkeypox transmission may have been happening without us really realizing it for some time, in part because of the pandemic response and the measures that have been implemented that have made the somewhat clandestine problem? I do not know.

Certainly we are seeing some strange phenomena in disease epidemiology in Europe – we are seeing the off-season circulation of diseases like RSV – last summer we saw pediatric wards under pressure. We have obviously seen the almost complete suppression of the flu, and when it returns, we don’t know what impact it will have.

It is certain that we are witnessing strange phenomena in the epidemiology of diseases in Europe.

With social and public health measures having been largely lifted, we are likely to see things that surprise us, and also, this has given monkeypox the loophole, to spread quite quickly. The same is likely to be true for the flu.

The big unknowns about monkeypox remain the uncertainties about potential long-term sequelae. One example being the impact on long-term fertility – particularly significant if the virus is found in semen.

So yes, there is a lot to learn. It will be extremely difficult to stop this epidemic.

The article was originally published on Medscape.fr under the title Monkeypox Perspectives: The Sexual Health Advocate Who Became a Patient and the Public Health Expert. Translated by Stephanie Lavaud.

For more on monkeypox, see our dedicated reference center.

‘You have everything to succeed in England’; Kyle Walker praised LaraMediotiempo

[Windows 7]Explain how to check the “product key”! – OTONA LIFE