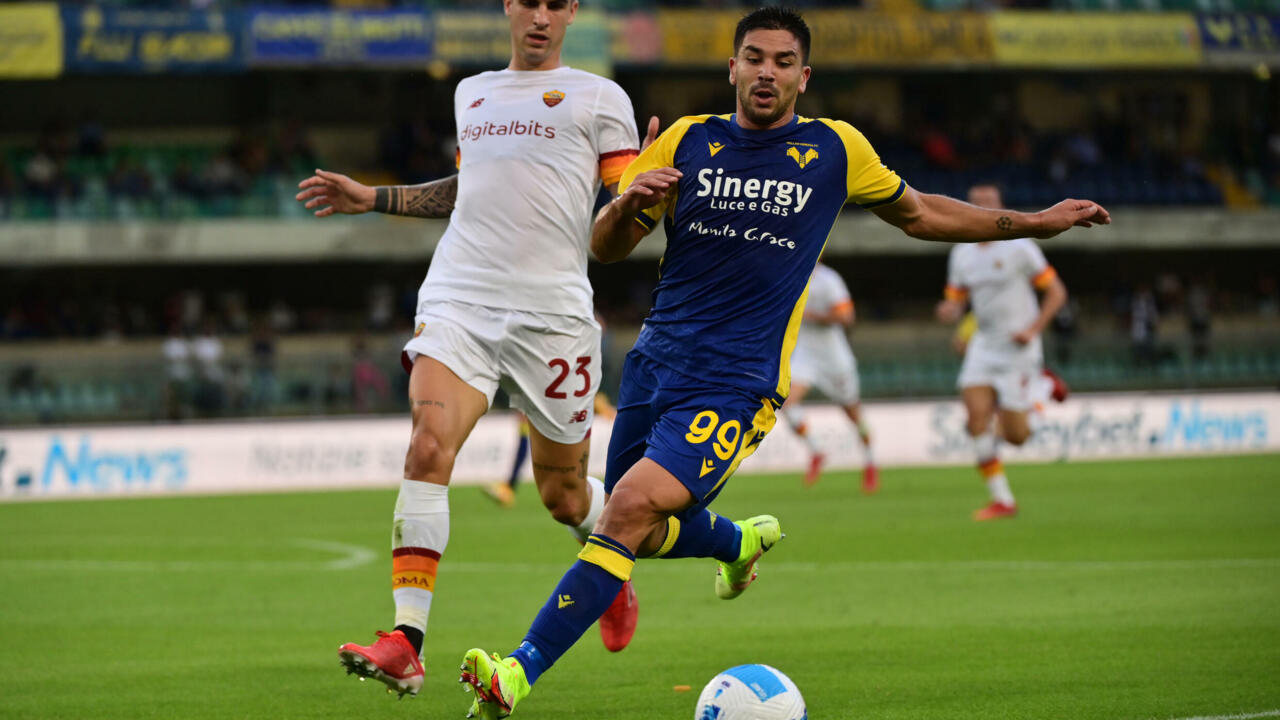 Hellas Verona hit two birds with one stone when it won its first victory this season and inflicted its first loss on its guest, Roma, by beating it 3-2 on Sunday in the fourth stage of the Italian Football League.

Hellas Verona turned the table on the men of Portuguese coach Jose Mourinho, who were the first to score through their leader, Lorenzo Pellegrini, with a wonderful touch with the heel (36).

Czech Antonin Barak equalized for Hellas Verona at the beginning of the second half (49), and Gianluca Capari gave him the lead for the first time in the 54th minute, but Roma managed to equalize thanks to friendly fire when Ivan Ilic scored an own goal by his team (58), before Davide Faraoni scored. The winning goal for the owners of the land after five minutes (63).

It is the first loss for Roma this season after six victories in various competitions and the first in the league after three consecutive victories, so his balance froze at nine points and he failed to regain the top spot from Inter Milan (10 points), who won 6-1 against Bologna on Saturday.

On the other hand, Hellas Verona won its first victory this season under the leadership of its new Croatian coach Igor Todor, who succeeded Eusebio Di Francesco from his position after three consecutive defeats in the league.

Mourinho commented on the loss: “I knew their qualifications even before they changed their team coach. They have already caused big problems for their opponents. Then, when there is a change of coach, there is often a reaction on a mental level, it can happen.”

“There is nothing to blame my players. But we didn’t adapt well to their way of playing, we lost the duels on an individual level and they put more intensity.”

The second pole of the capital, Lazio, avoided losing against its guest Cagliari and needed a late goal to tie it 2-2.

And international Ciro Immobile gave Lazio the lead in the last minute of the first half, raising his score to five goals in four matches this season.

Cagliari equalized at the beginning of the second half with a header by Brazilian Joao Pedro Galvão (46) and former Lazio Senegalese player Keita Balde gave him the lead (62), but coach Walter Mazzarri’s men, who led them to the first match, succeeding Lelandro Simplici, who was dismissed from his position, failed to maintain their lead and conceded their nets. The equalizer through Danilo Cataldi (83).

It is the second match in which Lazio fails to win after losing to Milan in the third stage, so it fell to seventh place with seven points, while Cagliari raised its score to two points in the eighteenth place.

Sampdoria followed in the footsteps of Hellas Verona, and in turn won its first victory of the season, when it defeated its host Empoli by 3-0.

Veteran striker Francesco Caputo, 34, imposed himself as a star of the match by scoring a brace in the 31st and 52nd minutes, before veteran midfielder Antonio Candreva (34 years) also added the third goal in the 70th minute.

Sampdoria started the season with a loss against its guest AC Milan, before falling into a draw against its host Sassuolo 0-0 and its guest Inter Milan 2-2.

Sampdoria raised its score to five points and climbed to eleventh place, while Empoli suffered its second loss in a row and the third this season, so its score froze at three points and fell to fifteenth place.

Moroccan international midfielder Mehdi Bourbaya led his team Spezia to its first victory this season when it beat its host Venezia 2-1.

Spezia scored in the 14th minute through Simone Bastoni, and Pietro Chicaroni equalized (59), before Bourbia, who came in as a substitute for Giulio Maggiore in the 78th minute, scored the winning goal for Spezia in the fourth minute of overtime.

Spezia raised his score to four points after drawing in the first stage with Cagliari before losing to Lazio and Udinese, while Venezia, who recently returned to the top flight, suffered his third loss this season, which came after his first victory and later Juventus play with Milan.

The stage concludes on Monday with the Udinese meeting with Napoli.