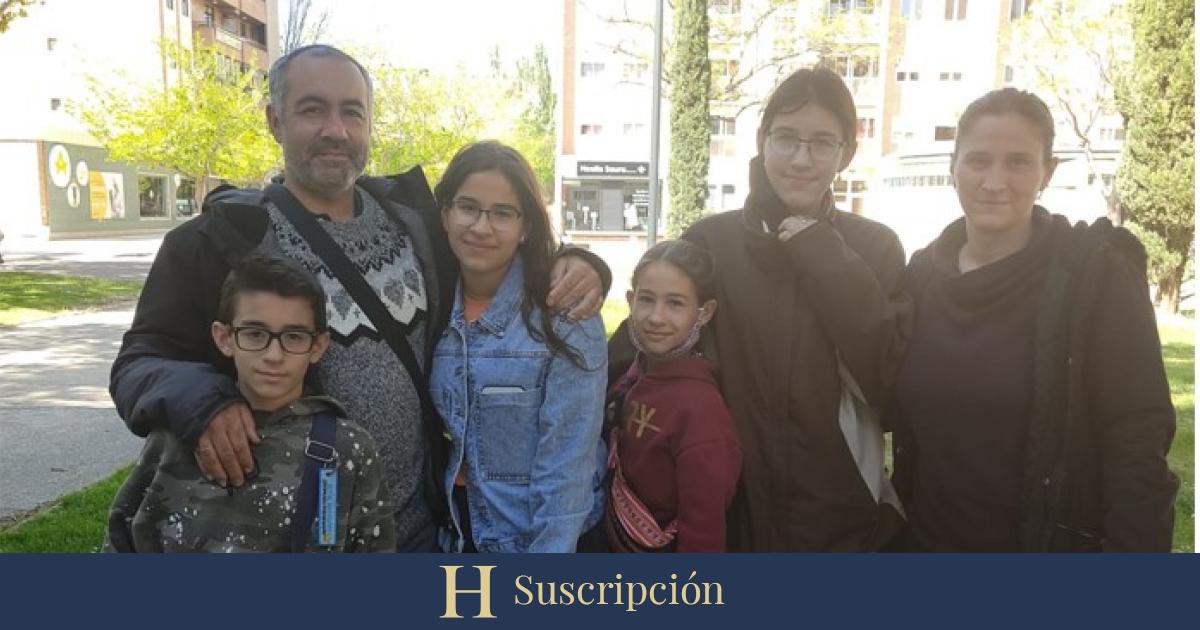 Mortgage, electricity, heating, water, shopping basket, gasoline… Everything has gone up in the last few months and the forecast that the curve will stabilize or go down is not at all encouraging. A situation that will put “even more” against the ropes the domestic economy of any homebut it affects larger families to a greater extent.

This is the case of Juan Muñoz and Marta Martínez and their four children: Ana, 15 years old; Laura, 14; Sergio, 13 and Isabel, 12. Six members of the same family unit who have seen their fixed expenses increase“with the rise of practically everything” -says Juan-, around “120 euros each month”.

“For us that amount is outrageous. The last week of every month is crazy. We are managing with what is left in the fridge to stretch out the days,” says the father of the family.

They live in a “small town house” in Perdiguera (Zaragoza). He’s technical engineer and works in the Aragonese capital in a renewable energy company. Her three oldest children go to the Santa Isabel institute, while the youngest goes to the public school in Villamayor.

“At home only enter my salary. My wife does not work because she is the one who is aware of the children’s schedules, of taking them to their classes, because in Perdiguera there is no public transport, of picking them up so they can eat at home, after school… We have no relatives hereso without help she is the one in charge. It is difficult to find a job that respects the different schedules of four childrenJohn points out.

But this is just the day-to-day logistics of a large family that has seen how since the pandemic began a 82% electricity or how 83% of the food in the shopping basket has increased in price. “Not to mention gasoline,” adds the father of the family. “For my job I do an average of 70 kilometers a day. A year ago fuel cost us 180 euros per month, now it is approximately 250“, points out Juan Muñoz.

The shopping cart is another headache for this family. With expenses controlled to the maximum -“we always buy based on the establishment that has the best offers”, says Muñoz-, “making ends meet now with a full fridge is a miracle“. “And before we spent between 60 and 70 euros a week, now we don’t go below 80, and that we consume white brands. With six members in the family it is difficult to control it, because something is always missing.”

“But it is impossible to save when, for example, I could find the sachet of grated cheese for 0.99 cents a few weeks ago and now it costs 1.10 euros. Or the container of mortadella of 0.85 is now worth more than one euro. Just like the fried tomato, which has gone from 0.33 to 0.45 cents,” Muñoz lists. “They are cents, yes, but for a family of six members is a sum and continuessays the engineer.

Seventy euros more per month for gasoline, an increase in the monthly shopping basket of approximately 15%, “and a exorbitant electricity rate“. “It is the only thing in which we have help, because with my salary – between 25,000 and 30,000 euros a year – we do not enter the minimum that must be met to qualify for more discounts. The social bond that we have was noticeable a year ago. So we paid electricity between 50 and 60 euros every two months. With the new rates we have come to pay 244 euros of invoice. Crazy, but between washing machines, the kitchen and the water heater that we have electric, we cannot consume less,” Juan Muñoz alludes.

To this list of expenses, the Muñoz Martínez family must add monthly 200 euros more of mortgage and the heating that they have of biomass. “We don’t pay for gas, but we don’t get rid of the rise in bags of pellets that we use for the boiler either. Before one cost 3.20 euros, now it doesn’t go below 4. We consume between five and six a week, so they are about 80 euros per month. Two years ago it was 65 euros approximately,” says the father of a large family.

“We feel more and more overwhelmed. Our children are getting older and, although they are satisfied with what they have and do not ask for brands or anything like that, they have to be given a small payment -5 euros for the whole month- in case they go out with their friends one day,” says Muñoz A situation to which they have “used” to live.

“Being a large family is daunting. In our case, for example, there are no vacations as such. At most, I have sometimes gone with my two small children to a hotel in Salou for a couple of days with a ‘flash’ offer, but the six of us have never gone on a trip together“, concludes Juan Munoz.