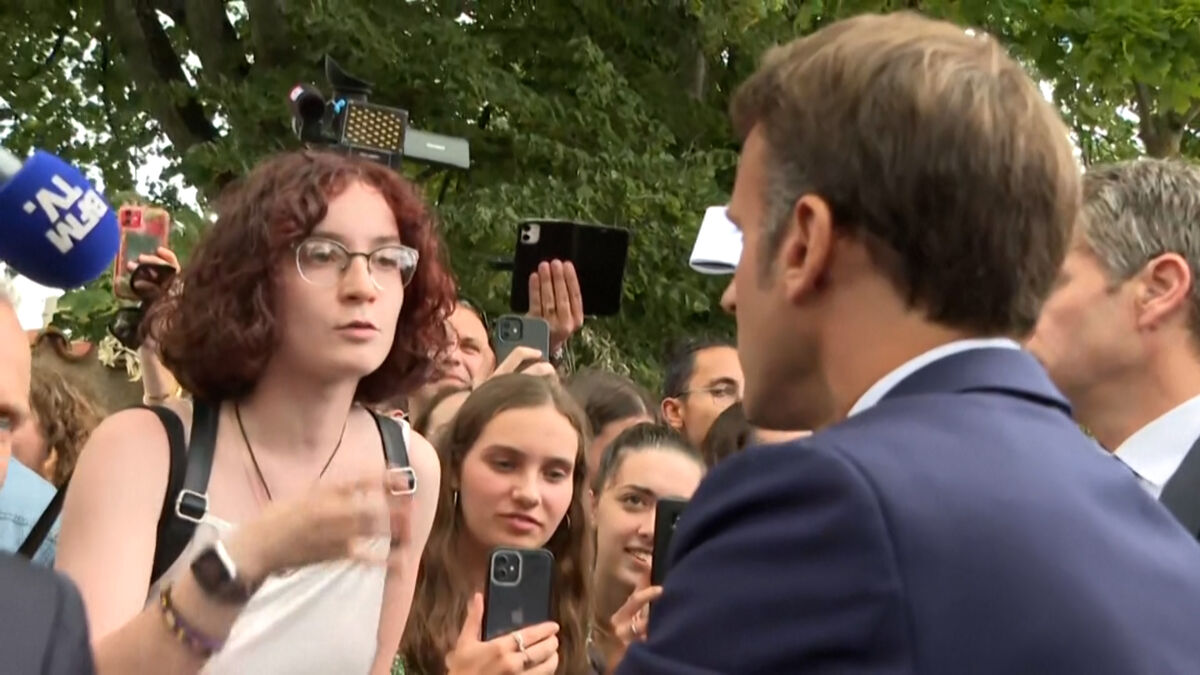 Can addressing Emmanuel Macron in the street have consequences? Laura, 18, received a visit from gendarmes to her high school on Friday, less than 24 hours later. having questioned the President of the Republic about his ministers accused of sexual assault. If this exchange was not the subject of this “meeting”, assures the gendarmerie of Gaillac (Tarn) to the Parisian, it is not the version of the young girl who is thinking about a possible sequel.

Thursday, the girl had arrested Emmanuel Macron while he was traveling in the Tarn. The video has since been viewed millions of times. Faced with the President of the Republic, Laura denounces: “You put at the head of the state men who are accused of rape and violence against women (the ministers Gerald Darmanin et Damian Abad are both accused, the first being the only one under investigation for which the prosecution has requested a dismissal) , why ? What Emmanuel Macron then brandishes the “presumption of innocence”, none of his ministers having been convicted.

VIDEO. Macron arrested in the Tarn on ministers accused of rape

From this exchange, Laura thought she was done, until Friday. “I was in Spanish class when around 11:30 a.m., the deputy principal came to get me to talk. Outside of class, she asked me if I agreed to speak to the gendarmes, ”explains Laura to Parisian, this Friday evening.

On the sidelines of her exchange with Emmanuel Macron, the day before, the high school student had confessed to having been the victim of a sexual assault in the RER 4 years ago, without having filed a complaint. “They asked me if I wanted to file a complaint, but it was very brief,” she explains. And the young girl then recounts a completely different exchange, closer according to her to “intimidation” and describing an “ambiguous” visit.

“No offense” on the part of the high school student, confirms the gendarmerie

“We quickly came to the exchange with Emmanuel Macron. They asked me what I wanted to do, so I told them, I told them that I wanted to ask such and such a question. Then the policeman said to me: It was not to do. His colleague added that if I had wanted to question the President of the Republic, then I should have gone through the hierarchical channels, by writing to the Elysée, ”assures Laura. She has the impression, she says, that the gendarmes are here “at someone’s request”.

“I obviously wondered if I had done something wrong,” says the young woman. Obviously it’s intimidating to see the gendarmes arrive at the school. Laura is also surprised: “They could have found my address in the end rather than going to high school. Two months ago, because I was on a school trip for the elections, I had made my power of attorney at the gendarmerie! »

Contacted before our exchange with the young girl, the commander of the gendarmerie of Gaillac Laura Barbuto assured that the visit of the police to the school did not start from a bad intention: “We were worried that she may have been a victim (sexual assault) and that she could not lodge a complaint. “The exchange with Emmanuel Macron was not” the object “of this visit, she assures. And the gendarmerie commander to point out, moreover, that there is “no offense” in the arrest of Emmanuel Macron by the high school student.

Laura and her “offended” parents contacted a lawyer on Friday. Laura thinks about the follow-up she could give.

League of Nations: the Blues still do not win