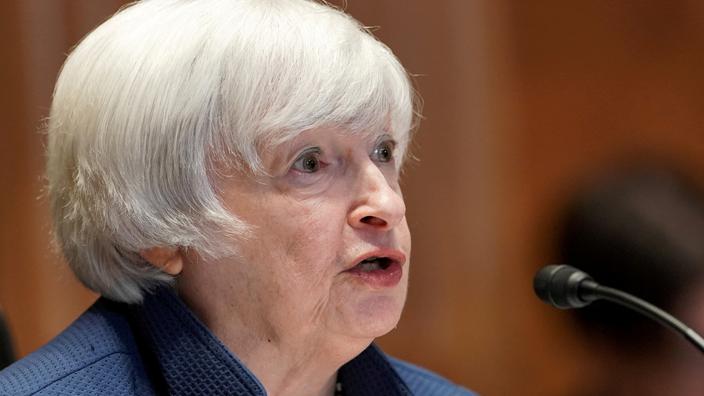 US Treasury Secretary Janet Yellen insisted on Monday “the necessity” to put in place “quickly” a regulatory framework for stablecoins, digital currencies that work on the model of cryptocurrencies, but whose price is fixed on traditional currencies.

Read also :Terrorism: Tracfin warns about the growing use of cryptocurrencies

Janet Yellen “Underlined the need to act quickly to ensure the establishment of an appropriate US regulatory framework”, said the Treasury Department in a statement, issued after a meeting on the subject of the White House Working Group on Financial Markets (PWG). “Participants discussed the rapid growth of stablecoins, the potential uses as a means of payment, and the potential risks to users, the financial system, and national security.”, is it specified.

US Central Bank (Fed) Presidents Jerome Powell and US Securities Regulator (SEC) Gary Gensler, among others, attended the meeting alongside Janet Yellen. The PWG plans to make “in the coming months” of “Recommendations” on the potential benefits and risks of stablecoins, the current U.S. regulatory framework, and developing recommendations to address regulatory gaps.

Since the launch of bitcoin in 2009, the model of central bank independent cryptocurrencies has won over many investors, but their price volatility is an obstacle to their use as a means of payment. Stablecoins seek to use some of the technologies developed for cryptocurrencies, but the companies that issue them say they have sufficient reserves to keep their price fixed. Existing stablecoins, like Tether and USD Coin, are mainly used in the cryptocurrency market, but the Diem project, financially backed by Facebook, could generalize their use.

Critics are concerned about the lack of transparency of some issuers and stablecoin platforms, which do not publish the composition of the assets they have in their portfolio to ensure the stability of this electronic currency. In addition, the rating agency Fitch noted, in a note published in early July, that Tether held around half of its reserves in the form of “Commercial paper”, a form of short-term debt issued by companies. Massive dollar withdrawals from Tether could therefore create disruption in the business credit market, Fitch said.